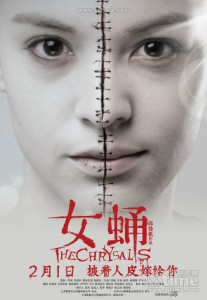 The Beast, Ah Gan, 2001
A group of young urban dwellers go on holiday to China’s exotic south-western region of Yunnan. They stay in a hut by the primeval forest, their host, an elder of the Naxi ethnic group, entertains them with tales of Shanling, legendary monster of the Naxi. As they realise that the Shanling is a legend forbidden to outsiders, they find themselves being picked off, one by one.

The Eye, the Pang Brothers, 2002
A blind girl undergoes a cornea transplant so she could see again. When she wakes up however, she finds herself seeing more than this world. Creepy scares and jumps from the masters of Hong Kong horror.

Dumpling, Fruit Chan, 2004
A wealthy woman finds her whole life hanging in the balance as her youth slips away. She visits a quack who peddles recipes that guarantee eternal youth. Gruesome and twisted food related horror from a Cantonese director? It figures.

Scary Market, Ji Zhouxin, 2011
Having lost his job, a young man gets embroiled in a robbery and is taken hostage to a supermarket in the woods, where he comes face to face with the living dead. Comedy zombie action.

Bixian Panic, Guan Er, 2012
A group of bored art students rent a remote old house, and summon the spirits via BiXian. One of the mainland’s first “Ouija Board horrors”.

Lift to Hell, Ning Jingwu, 2013
Set in a beautiful old hospital in Northern China, where mysterious heart-related
deaths start to occur. The old lift goes off the rail, heading straight to the 18th floor, underground. Gritty, visceral, a rare treat from mainland. Based on an online novel “Eighteen Floors Underground”.

The Chrysalis, Qiu Chuji, 2013
Is it really her under that skin?

Demon Slayer Thirteen, Zhang Tao, 2015
All his life Thirteen has been training hard with his manual, a family heirloom. While at the pool with a friend, Thirteen saves a girl who is plagued by malign spirits. And the rest is history. Mainland continuing the excellent tradition began by Hong Kong in the 1980s, full on magic CG, Red Army zombies and so forth.

Variation in Crisis, Zhong Hai, 2015
One of mainland China’s first biohazard horror films. A laboratory successfully develops a bioweapon virus. A scientist tries to save his daughter who has been infected.

And finally, just to remember that there are good, old, mainland horror films, if you know where to look: an excellent classic from 1981 –

The Shadow of a Ghost, directed by Guo Baochang and Wang Ling
An old mansion, sealed for years, re-opens as a museum. A ghost is sighted by the museum’s guide, our heroine, who has fallen for a social outcast, a scientist obsessed with finding ghosts with his machines. A film with a ghost, but a lot more than just a ghost story. A film about embracing the advancement of society, opening one’s mind and pursuing one’s beliefs against all odds. Based on a scifi novel.