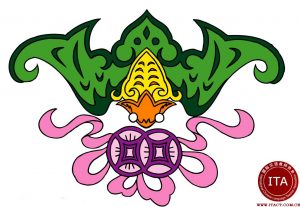 I have always told people that my ultimate remit is introducing and explaining China and its diverse cultures to the world. On this year’s national day, I will be talking about the elements of this subject which might be slightly harder for people in the West to get their heads around – common cultural symbols that hold exactly the opposite meanings.

I start with the number 13. The Chinese love luck and puns, especially the Cantonese. The Cantonese pronunciation of 十三(“sup saam”) is a near homophone to 实生(“sut saang”), meaning definitely or certainly alive or vibrant. In the Guangdong region, it’s common to find a 13thfloor followed by a 13A in a building, bypassing 14, an extremely unlucky number.

To the Chinese, 666 is not the Number of the Beast, nor are those biblical beasts relevant to their mythos. The number 6 六(“liu”)is a homophone of the slang term for “smooth”, both in Mandarin and Cantonese. 666 is internet slang that derived from League of Legend players, meaning cool or awesome.

White is the colour of death and mourning. White is worn to traditional Chinese funerals and the mysterious lady in white or the white-clad female ghost is a staple of Chinese horror and gothic.

Bats are auspicious creatures to the Chinese. The second character in their word for bat, 蝙蝠，whether in Mandarin or Cantonese, is a homophone and near homonym of 福, fortune and happiness. You’ll often see joyous, curling bats in traditional art such as Nianhua (new year) paintings.

Snakes are a symbol of creation and power in the earliest indigenous Chinese myths. The primeval water god Xuan Wu, takes the form of a turtle serpent. Nüwa, the wise and benevolent goddess who created humankind and saved the world from destruction, also appeared as a half-human-half-snake figure.

Spiders represent luck and promise in traditional culture, their web a sign of the gift of creativity during Qi Qiao, the Festival of Crafts and Skills on the seventh of the seventh lunar month.

Unlike destructive fire-breathing Western dragons, Chinese dragons are largely benevolent. In mythology, dragons are rain deities and bringers of good weather. And in legends and folklore, they act as bringers of fortune that remember and reward acts of kindness. (It goes without saying, you do not piss any dragon off, wherever they come from).

Now, I turn to some social conventions. Slurping, whether it’s your soup, noodles or tea, is not a rude mannerism. It shows appreciation of the food or beverage and that you think it’s delicious. So it’s OK to slurp in China.

In many other cultures, it’s rude not to finish your food, but if you’re invited to a meal in China, unless you plan on not eating ever again, don’t polish off everything in your bowl. Your host will consider their hospitality inadequate and will keep on filling your bowl. Leave a tiny bit to show you’ve had an elegant sufficiency.

Expressing can be too much.

It’s considered untoward is exhibiting too much emotion. By Chinese standards, this means anything beyond mild contentment, especially if the sentiment is a negative one – displeasure, upset, or sadness, when you don’t do anything do address the issue. While I was attending university, a fellow hall resident pointed out to me that I was “always the same”. As an immigrant living in Western society, I have long since learnt to express myself more, although some still don’t find me very expressive. And people think the British are reserved.

If someone in China tells you you’ve put weight on, don’t be offended. They’re not calling you fat. Although attitudes among younger generations are increasingly aligning with Western views on this matters, to be well-fed is considered a sign of success, affluence and prosperity by the Chinese.

Being old is good.

If someone much older than you in age talks to you as if you are the older party, don’t be alarmed or offended. Terms that denote seniority of age are an address of deference to the Chinese.

In traditional Chinese culture, the colour yellow has all the positive connotations. It’s an important elemental colour, emblematic of nobility, royalty, and of totemistic importance to the Chinese. The great civilization of the Yellow Race, nurtured by our yellow earth, in the cradle of the Yellow River. We are proud to be yellow.