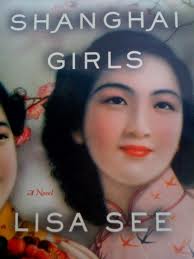 People say, never judge a book by its cover.  I have always judged contemporary novels by their covers. I trust that the penetrating market research and sensitive designs of today would somehow bring out the essence of the book on its dust jacket. This philosophy has mostly stood me in good stead (I’m talking about the hardback cover, there’s of course the paperback edition, mass market paperback edition etc… but I digress). This time, however, I feel I’ve been deceived.

The cover of the hardback first edition of Shanghai Girls I’d acquired shows artwork closely imitating1930s Shanghai promotional calendars. I thought I’d be totally immersed in the world of “The Paris of the Orient”, where carved wood windows existed side by side with art deco sky scrapers, streets bustled with rickshaws and automobiles, glamorous, luxurious nightclubs filled with westerners rubbing shoulders with ladies in traditional rouge make up and tightly fitted, high-slit qipaos… exactly like the ones you see on the posters, undercover revolutionaries in cheongsams and round glasses roamed the street corners whilst gangsters in sharply tailored suits and trilbies frequently terrorized the city. And I got that, for about a fifth of the book, before being shanghaied, (or in this case, “de-Shanghaied”) to Los Angeles for the rest of the novel.

Shanghai Girls centres around two sisters from a well-to-do family who pose for calendar paintings, whilst living the life of the metropolitan socialite unique to Shanghai at the time. Unwittingly, they get involved with local mobsters, the Green Gang, embroiled in the Japanese invasion and end up on American shores. Much of the novel portrays their lives in Los Angeles until the late 1950s.

Whilst I can see that the use of the present tense is meant to make the reader feel as if they are present during the events in the story, the narrative voice is clearly one of close personal memoir, and I found the schoolboy error of sudden switches between past and present tenses, confusing, artificial and disconcerting.

As much as I feel the book didn’t satisfy my hunger, period details did shine through. Cheongsams, laowai, gangsters and nightclubs, are what we all know about this period, but the novel provides interesting insight into little things too. Things such as, what the street vendors sell, stories behind the poster girls and the painters who created this “Dong Xi” (Eastern Western) aesthetic style. Descriptions of old Shanghai slums and dead bodies strewn on the streets tell a tale of a city of contrasts and extremes built on circumstances unique in Chinese history. When their father tells our heroines, May and Pearl, of their arranged marriages, the cry of one peddler tells us what time of the year it was: “Pu, pu, pu, reed root to brighten the eyes! Give to baby and he will be free from all summer rashes!”*. The use of the Wade-Giles transliteration system, now considered antiquated, is highly effective in placing readers right in the era of 旧上海 (“Jiu Shanghai”) or Old Shanghai.

One technique this writer excels in, is her point-of-view narrative. Pearl, who finally wakes up from a long loss of consciousness, narrates:

“Once I lift my arm to block the sunlight and feel something heavy slide toward my elbow. It’s my mother’s jade bracelet, and I know she’s dead. I’m in a hospital. Soft voices say words like ‘morphine’, ‘lacerations’, ‘infection’, ‘vagina’ and ‘surgery’. Whenever I hear my sister’s voice, I feel safe. When I don’t, I despair”.

A couple of sentences with careful and selective detailing conveyed through the character’s cultural sensitivity, speaks volumes, especially during states of heightened emotion.

Considering the book sets out to be a historical novel, my biggest qualm with it is the portrayal of the macro-political backdrop to the events in the story, first concerning the Communists and the KMD, and later American, Chinese involvement in the Korean War and then finally the initial years following the formation of the People’s Republic. For a book that condemns Chinese propaganda, it seems to take America’s party line on most subjects concerning Chinese history. I have always stated that these reviews, blogs and notes focus on culture rather than politics, so it is with a bitten tongue that I move on to points of cultural interest in the book.

As mentioned before, the street scenes are used to tell a lot about Shanghai society, and albeit depressing, I found the parts about Angel Island, L.A.. and its early Chinese immigrant community ** quite informative, as were the sections featuring the fantastic Anna May Wong, the first Chinese American movie star and the immigrants’ involvement in Hollywood. The fate of the character of Z.G. the liberal poster artist, is significant, as many commercial painters who honed their skills painting Chinese subjects and surroundings with a combination of western and eastern techniques, did indeed go and work for the Communist Party after the invasion. This is why, regardless of their political stance, Chinese propaganda posters are still exhibited, auctioned and studied for their aesthetic value. All the exuberant creativity during the early 20th century, fuelled by commercialism meeting the ultimate of modern Chinese chic, was poured into the making of those propaganda posters.

I was not as entertained by this book as a piece of fiction. Whilst, in See’s other popular book, Snow Flower and the Secret Fan, the traditions and customs of China became the characters in themselves, here, they are weights around the characters’ necks, making them appear foolish and superstitious. I found some of the information on early Chinese immigrant experience in America very interesting. I struggled to make it through to the end, but my love of books as a whole won out. Reading this makes me recommend “Snow Flower and the Secret Fan”, also by Lisa See, twice as much.

*“Pu” refers to 菖蒲 (“chang pu”) or calamus, a plant with medicinal properties believed to ward off bad luck, commonly hung on doors, worn or carried during Duanwu or Dragon Boat festival that takes place in June (I tweeted about this last year)

** Very different from how it all began in the UK