Tomorrow is Halloween or All Hallows Eve, the biggest festival featuring supernatural phenomenon in the West. The closest thing on the Chinese calendar took place this year about a month ago. That was Zhongyuan, or Ghost Month, the biggest of three annual festivals of the dead. China has a rich history of ghosts and spirits, as many as 1520 have been compiled. To celebrate the global love of ghosties and ghoulies, I’ll be publishing a mini series of articles on the collection 33 ghosts I talked about over this year’s Ghost Month, to give you a flavour of Chinese ghosts and an idea of just how wide a range there is.

旱魃, Han Ba
A monster of folklore that causes drought, believed to come from hundred-day old corpses that don’t decompose, and rise from the earth as Jiangshi (literally “stiff corpse”, or Chinese zombies). Digging up, beating and burning Jiangshi were a popular folk custom during the Ming (1368-1644) and Qing (1644-1911) eras, usually from moist graves in drought areas. This custom continued in areas of Shandong up til the 1960s and features in Shi Jing (China’s first anthology of poetry compiled by Confucius 6th to 5th centuries BCE). In Han mythology, Han Ba is believed to be Pa, the drought fury, the daughter that Huang Di summoned to help him defeat his archenemy Chi You. Pa refused to return to her caves in the mountains and instead wanders the earth.

独角鬼王, Du Jiao Gui Wang
His named literally means “Singled Horned Demon King”. A very powerful demon whose demonic essence is concentrated in his horn, which is said to be so powerful that no one really knows what it’s capable of. The Chinese literary classic “Journey to the West” features Du Jiao Gui Wang as a friend to Wu Kong, the Monkey King. In his early years, the young monkey spirit, whose mere existence challenges the boundaries between the worlds of gods and demons, befriended many demons. Later, in his role as protector of Xuanzang at the behest of the gods, some of his demon friends still came to his aid, when he needed assistance on their long and hazardous pilgrimage.

刀劳鬼, Dao Lao Gui
This demon lives the mountains, like to roar in the wind and rain, and shoot poisonous darts. Venom from the male demon kills instantly, that from the female induces swelling, and lengthens the agony. The dart of Dao Lao Gui means certain death within a day, unless treated promptly. The demon was documented in Sou Shen Ji, the Jin Dynasty collection of supernatural phenomenon by Gan Bao (286-336), and still frequents many contemporary video games.

山魈, Shan Xiao
A monster that lives in the mountains. Covered in fur with large teeth, it is super strong and can tear lions and tigers apart with its bare hands. It has a habit of visiting abandoned homes and country dwellings and is famously depicted on such an occasion, in an encounter with a terrified scholar in 18th century collection of ghost stories “Liao Zhai” compiled by Pu Songling (1640-1715). The Shan Xiao come in many guises, sometimes in their true form, other times as irresistible sirens. They like to hurl stones at travellers, lead them astray, and occasionally, eat them. 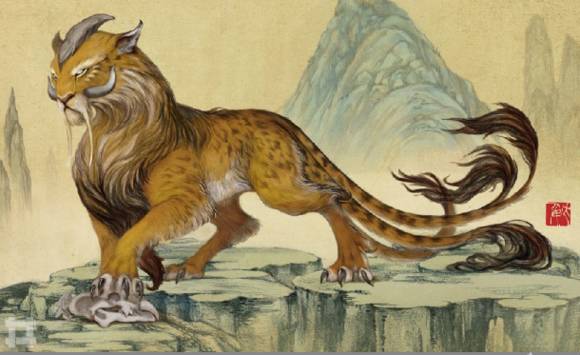 猙獰, Zheng Ning
An ancient horned beast, with five tails and the body of a leopard. Very ferocious. The male is called Zheng and the female Ning. The ferocity of the Zheng Ning became so well known that it lent its name to the adjective “zheng ning”, meaning “malevolent, fierce, sinister”. Modern interpretations of the monster have really picked up on this aspects.

膏肓鬼, Gao Huang Gui
This ghost lives in the body, in the area between the heart and the diaphragm. It inspires ill thoughts and causes physical illness. It also inspired the Chinese idiom 心中有鬼, “xin zhong you gui”, literally “to have a demon in one’s heart”, meaning – to have dubious intentions.

腹鬼, Fu Gui
This ghost lives in the human abdomen, whispering to the victims and causing extreme pain in their internal organs, to be followed by death. As they both live in the body and their victims rarely survive, the appearance the Gao Huang Gui and Fu Gui remain a mystery.

狍鸮 Pao Xiao, a.k.a. 饕餮, Tao Tie
A monster with a human face, goat body, tiger teeth and eyes near its armpits. It eats humans and likes to lure its prey with infant-like cries. Upon seeing one, it’s best to run, no use walking round its back. “Tao Tie” is also a Chinese adjective for “gluttonous”. Hoards of these monsters recently starred in Zhang Yimou’s controversial film “The Great Wall” (2016).

猫鬼, Mao Gui
A cat ghost, believed to be ghosts of deceased old cats, raised to take their targets’ lives and fortunes via the Gu Du rituals (similar to voodoo magic in its application). These rituals were popular during by 6-7th centuries CE. Once targeted, the victim was said to feel as if pierced by needles before Mao Gui consumes their organs. Many cats were apparently sacrificed during the Sui (581-618 CE) era, so their actions could be revenge. In contemporary Chinese RPG imagery, Ma Gui has often been reinterpreted as a cute kitten, but their adorable appearance could be deceptive. A interpretation of Mao Gui serves as the main plot in the fantasy film “Legend of the Demon Cat” by renown director Chen Kaige, out in December this year.