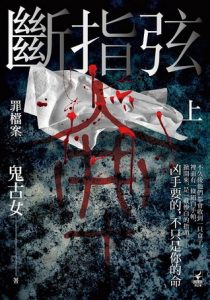 Horror is one of my favourite genres. Previously during Zhongyuan (Ghost Month), I’ve written about different types of Chinese ghosts and spirits, classical Chinese horror literature, and horror films. This year, I’m taking a look at contemporary Chinese horror writers. Here are eight significant writers in the kongbu genre.

Tinadannis
A writer from Guangdong, born in the 1980s, Tinadannis is only one of three pseudonyms under which this writer publishes. She is considered one of the founders of the internet college horror novel. She is known for her Yuangui (wronged ghost) Street quartet (1999 -2008), set in a real street in Zhongshan University. The story began life on the Yatsen Channel, the university’s BBS, soon spread around other university networks and gained even more popularity as it re-published on site after site in cyberspace.

启山 Qishan
A chemistry graduate from Beijing who now lives in the U.S. and works in the pharmaceuticals industry. Qi loved to tell his cousins stories as a child, which he would make up from novels, comics he’d read and movies he’d seen. He’s known for his sci-fi and suspense horror novel Memory Puzzles (jiyi mizong) in which the protagonist wakes up in a mortuary with a strange face and strange ID;  escapes from hospital, only to find he’s wanted for kidnapping.

可爱多的粉丝 Cornetto Fan
A law graduate from Beijing, part of the post 80s generation, Cornetto Fan writes fiction in her spare time. She combines a carefee and witty writing style with eerie, creepy horror. With a structure akin to traditional Chinese horror, the settings of her stories often cross from the ancient world into the modern. She is known for The Banquet of Hundred Ghosts (bai gui yeyan) and Moonlit River in Spring (chun jiang hua yue ye).

蔡骏 Cai Jun
Considered the master of traditional xuanyi (suspense), Cai is well-loved for the horror atmospheres he creates. Born in the 1970s, he began publishing novels at the age of 22, and has maintained a nine-year high-selling record in the Chinese thriller charts. He is known for works such as The 19th Level of Hell, the urban-legend-style Butterfly Cemetery (adapted into the film On Fallen Wings, 2017), Virus, The Curse, Cat’s Eye, Flute At Midnight.

眉笔 Meibi
Spirit summoning games is a common sub-genre in domestic Chinese horror fiction, and Meibi is considered among the best of game horror writers. She excels in character development, writing the psychology of her characters and is appreciated for her unrestrained imagination and keen insight into human nature. She is known for Spirit of the Brush (bixian).

红娘子 Hongniangzi
A writer of the miao (hmong) ethnicity from Hunan, Hongniangzi, whose pseudonym means Lady Red, is a horror writer of high renown in China. She has written 16 novels, many of which have been adapted into TV series, and been published abroad in Europe as well as the rest of Asia. Her literary writing style and well-rounded characters, mean that her works have stood the test of time. She is known for her “Seven Colour” horror series such as Red Stain, The Green Door, Turqoise Silk.

周德东 Zhou Dedong
One of China’s most famous horror writers, Zhou currently lives in Beijing and heads the editorial of various magazines. He has written over 600 horror stories, published ten books, and been voted “most popular internet author” three years running. He is known for “ When Three Roads Meet” (san chakou) , “What’s Three Minus One?” (san jian yi dengyu ji), “Door”, and “Ghost Wedding” (minghun). Zhou’s works have been translated into many languages, he‘s hosted a storytelling programme on TV and written the script to a thriller stage show.

鬼古女 Guigunü
There are two writers behind this best-selling name in Chinese horror Guigunü (derived from Guiguzi, a name by which renown military strategist of the Warring States Wang Chan is still known). They are in fact, Yu Yang and Yi Ming, a couple who live in north America. They’re known for their paranormal deduction series, The Fragmented Face (sui lian) and The Hidden Cavity (an xue), set in a medical academy in Jiangjing, with its haunted dissection room.