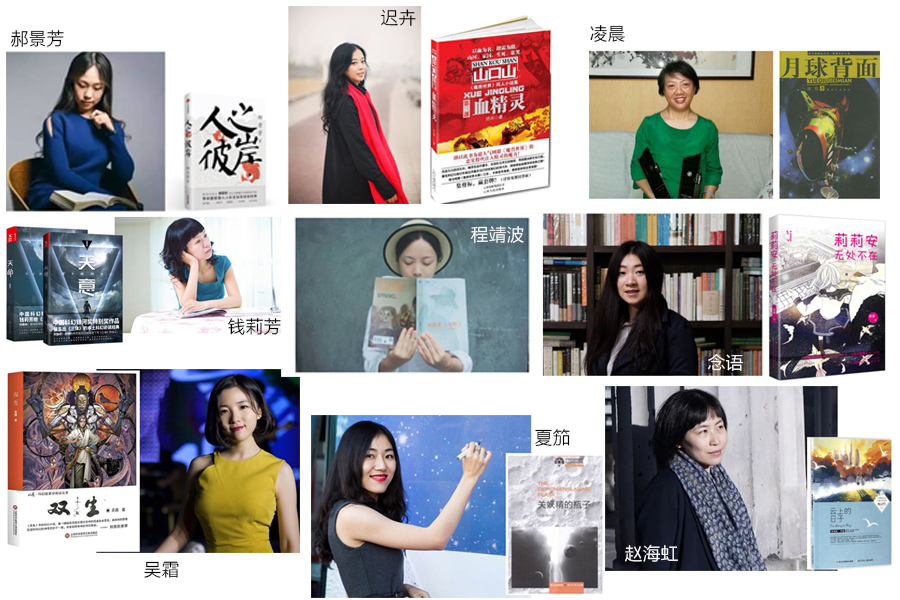 Through a year of quarantines and lockdowns throughout the world, many women are finding that hard won progress in their emancipation has somewhat diminished. Their roles regressed to the main caregiver, or manager of the house, regardless of their other responsibilities. On this year’s International Women’s Day, it’s important to remember the capabilities and achievements women have pushed forward with, both in spite of gender stereotypes and male bias, and in light of freedoms won. I have recently researched China’s net novelists, and was amazed at the creative output of women who were writing whilst also holding down full time jobs, and labouring under the yoke of domestic responsibility. Science fiction is another realm still primarily considered to be the domain of men, where women’s contribution is often overlooked, especially in China.

The earliest origins of kehuan (Chinese science fiction) can be traced all the way back to the Jin Dynasty, with works such as Wang Jia’s Forgotten Tales (shiyi ji), though 1904’s “Lunar Colony” by the writer known as Huangjiang Diaosou (“old fisherman on desolate river”) is widely recognised as the first real work of kehuan. This era was a fertile ground for speculative writing, as the nation ventured into the use of modern technology, though because authorship was not seen as a reputable career, almost all science fiction authors wrote under pseudonyms, many of their identities still unknown to this day. During this time, China’s Xinnüxing (new women) and female writers were making themselves heard, and there was a push by women to inhabit all fields traditionally held by men. So there are likely to be female writers behind the masks of at least a handful of these pseudonyms.

It has not really been til China’s third science fiction revival, in the 1990s, that female writers really became an influential force – despite still being overlooked in literary collections and burdened with the stigma of “not being able to do hard science”. Nonetheless, they were a force that changed and diversified the direction in which the genre was heading, and it is only right to celebrate the pioneers, and the female writers who they made inroads for.

One of the earliest female pioneers of contemporary kehuan, Ling Chen defines her pseudonym as “between day and night”, which she adopted for its gender neutrality. She quit her Physics teaching job, becoming one of Chinese SF’s enduring female voices. Her signature work “Awake, Shuitun”, written from the viewpoint of a spaceship’s AI, won the 8th global Xingyun (Nebula) Award as soon as it was published.

Another female sci-fi writer with a long-running career, Zhao Haihong has been publishing stories since 1996 and is the winner of the National Award For Outstanding Children’s Literature and a six-time winner of the prestigious Yinhe (Galaxy) Award. Despite juggling a lectureship, family life and her writing, Zhao achieves perfectly balanced crafting in work, whether it’s a detective story, a time-travelling historical fiction, or an alien’s experiences among humans.

A female writer that certainly brings a unique, genre-defying perspective to kehuan, Tang Fei was first published in 2005,  her work appearing in SFF periodicals such as Jiuzhou Fantasy, Science Fiction World; as well as literary magazines like Fiction World, and Shanghai Literature.

Cheng Jingbo, who works as a children’s book editor, is a part of China’s new generation of speculative fiction writers. Her fantasy story, “Lost in Yoyang,” won the Special Award for Youth Literature and the Best Short Story at the First Xingyun Awards. She explores the more spiritual side of kehuan with her work frequently straying into allegories and fairy tales.

Beyond editing Chinese Fiction world, China’s longest running SF magazine, Chihui has won a slew of awards for her writing, including 2016’s Silver Xingyun for her novel “Artificial Humanity 2075: Recombined Consciousness”. Her work combines dystopian social elements with gritty plots and psychological suspense. A writer that refuses to shy away from the gory and gruesome, she challenges a lot of preconceptions about female sensibilities.

Hao’s 2016 Hugo Award for “Folding Beijing” was certainly a milestone for women’s science fiction in China, and Chinese science fiction around the world. Her work ranges from interplanetary space epics, to extraterrestrial culture, to the socio-economic impact of high-tech futures, often reflecting her professional interest at the China Research and Development Foundation and her experiences and concerns as the mother of a young child.

Apart from holding a professorship in Chinese literature, Xia Jia is a seven-time winner of the Yinhe Award. Her writing frequently explores not only how technology can be employed to improve social conditions, but also the tension between traditions and technology, and the impact of this on futuristic societies.

Anna Wu is a Chinese science fiction author, screenwriter, and playwright. Her script “Of Cloud and Mist” won Best Film at the 6th Xingyun Awards. Her writing style is exquisite, florid and literary, as she frequently focuses on the restorative power of Art in technology-dominated future worlds.

Gu Shi holds an MA from the China City Planning Research Centre, where she currently works. Since 2011, she has published over ten pieces of SF and thriller fiction, winning a series of Xingyun and Yinhe Awards. Her stories tend to feature unconventional female characters, and she is adept at weaving hard science into her storytelling, without compromising rounded and flawed characters.

Regina Kanyu Wang has a series of prestigious awards to her name, including a Silver Award for Best Novella for her work “Of Cloud and Mist”, and a Gold for Best Film Adaptation at 2016’s Nebula Awards. Wang is currently pursuing a PHD in science fiction, and is one of the writers trying to take kehuan from the hard-science-focused direction the genre seems to demand, into one where more emphasis is placed on story and character development.

Chen Hongyu won a Nebula Award for her editing work with Science Fiction World. Her story “Western Heaven,” an alternative Journey to the West, was nominated for both a Chinese Nebula and a Coordinates Award. She has become well known for her use of male protagonists, subverting expectations of female SF authors.

Nian Yu
A lawyer by day, Nian Yu is a self-proclaimed post-95 avant-garde sci-fi author. Despite her young age, she writes with a seasoned and world-weary tone, combining feminine sensitivity with the logic of sci-fi. She won the New Author Silver Award at the 7th Xingyun and has published a short fiction collection, “Lilian is Everywhere”.

One of the most popular novelists on Jinjiang Literary City,  China’s major female-orientated internet publishing platform, her imaginative, flowing and humorous writing style has made her popular and accessible. Her futuristic sci-fi romances often feature danmei (Boy Love) elements.

Women’s writing is playing a key part in the growth of Chinese literature and science fiction. Most of these incredible women combine demanding day jobs, young families and still produce excellent works of kehuan. Without female writing, we would not have the rich and diverse output of Chinese science fiction we do today. Fiction that appeals to our empathy, invests our emotions as well as impresses us with its scientific constructs. This is not to say these elements are missing in modern male writers, but without the female voice in this conversation, perhaps it would be. Some works by most of these writers are available in English for you to discover and enjoy. Many will be featured in my collection Sinopticon, published in the summer this year, by Solaris books.