I am not a fan of minimalism, and when you push through London at its most bustling, at London Bridge, usually I would be far more inclined to stop at Zandra Rhode’s Fashion & Textiles museum, rather than push on to the clinically bare white walls, and fluorescent lighting of The White Cube on Bermondsey Street. 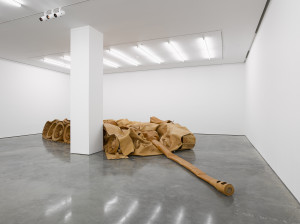 I turned to the north side, following the one sign to the work of He Xiangyu, and was confronted by a huge leathery, rubbery blob, collapsed on the floor. It took a mere moment to realise that the warped thing in front of me, is a tank. Every plate of tread, every bolt and rivet intricately represented. A glance at the exhibition leaflet, the only signage to the work, confirmed the suspicion given by the pungent smell, that He’s Tank Project is indeed made of leather. A deflated weapon of destruction, represented in luxury Italian leather, aptly demonstrates his intentional questioning of the steady advancement of Western materialism in China.

Across the room, a long slice of egg tray, created in gold plated copper, held a single egg. Spot lights bathed the piece in a glorious orange glow, creating contrast between the ordinaryness of the egg and its overpoweringly sumptuous display. The piece, titled 200g Gold, 62g Protein questions the way values and meanings are assigned to objects and materials. With particular view to art, this piece really questions the validity of things without “usefulness”, but also, the excesses of our culture. 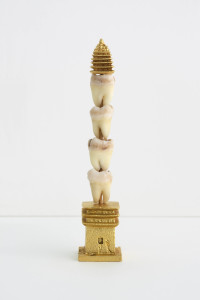 Two more conceptually led pieces are on display as part of this exhibition. One, consisting of copper casts created by He to simulate the tactile sensations of his tongue and mouth, displayed in a room with entirely pink walls and pink carpet, simulating an oral environment. The second, which I felt to be the most visually pleasing piece in the show, is Wisdom Tower. A tiny golden pagoda where the centre has been replaced with four of He’s wisdom teeth. Displayed in an alcove, and lit to frame the piece in a rainbow halo, it resembles the priceless shelizi, the Buddhist equivalent of reliquaries, in temples. Could great artists inspire the same sort of strong faith as saints? Are He’s physical remains as great a draw as those of ancient scholars? If so, why? If not, why not?

He Xiangyu gained international fame for his Cola Project, in 2008, in which he melted 127 tons of Coca Cola bottles, producing various pieces, including Song Dynasty style landscape paintings. His current exhibition at the White Cube runs until 13 April, whilst fellow Chinese artist, Liu Wei’s work is on display at White Cube’s Mason’s Yard gallery.

Jay Jopling, the owner of the White Cube galleries has not ignored the growth of interest in Chinese art, displaying Chinese artists regularly for the last few years, and allowed the closure of the Hoxton White Cube in 2012, in favour of a new venture in Hong Kong.

I would highly recommend a visit to He Xiangyu’s exhibition, but if you find yourself suffering from the White Cube’s starkness, You can always find relief at the Tea Pod  for a cuppa before enjoying the vibrancy of the Fashion and Textiles Museum.