Feb 17th 5 CNY Things To Do Outside Chinatown

This week is Spring Festival 2015. In London’s Chinatown, festive lanterns shine over frantic shoppers rushing about to prepare for the biggest annual feast and celebration, there will be lion dances in Gerrard Street and music performances in Trafalgar Square. Is the thought of pushing through the crowds again making your head spin? Are you an adventurous Sinophile wandering what else there is beyond the bounds of Soho? Here are some things you can enjoy in London outside Chinatown.

It’s a Cantonese tradition to pay a visit to the flower market before New Year’s Eve so you can decorate your home with Spring’s fresh stock. The most sought after plants are orange trees, peach, cherry or plum blossoms and catkins for their symbolisations of longevity, good luck and plenty. These would supplement bunches of gladioli, chrysanthemums and orchids, grown in abundance in China’s tropical southern most regions. You can get a good approximation of this at flower markets such as Columbia Road, where astute merchants await for their Chinese New Year custom with this choice selection. Lilies or proteas would stand in nicely for the gladioli and chrysanthemums. There is also a range of street food, farmyard produce, craft shops, cafes and a courtyard market to explore.

Columbia Road Flower Market is open on Sundays from 8 til 3 (columbiaroad.info). If you’d like to find out more about Chinese flower markets:

If you enjoy the theatre and are looking for something to do as a family,“Yeh Shen” is the perfect play to see over Chinese New Year. The oldest recorded version of the fairy tale, this 9th century Eastern Cinderella’s fairy godmother is a friendly fish spirit and her royal ball is the village elder’s Spring Festival celebrations. The script and character design translate well into British theatre, with digestible and magnetic elements of Chinese culture. A twist in the story leads to an exciting finale, as the resourceful direction draws on Chinese opera, pantomime and Eastern puppetry techniques, filling the play with a magical, otherworldly atmosphere. You will leave the auditorium feeling entertained, tickled and uplifted.

“Yeh Shen” is on at the Polka Theatre (polkatheatre.com) in Wimbledon 19-22 and 28 February. If you would like a read a fuller review of the play: 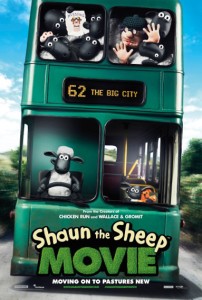 It is no coincidence that the “Shaun the Sheep” movie is released during Chinese New Year in the year of the Sheep. New Year is a time when the Chinese flock to the cinemas to see the year’s big Spring Festival blockbuster. “Shaun the Sheep” is one of the very few films licensed each year for distribution within China. This year the very British animation will be competing with native Chinese animation “Pleasant Goat and Big Big Wolf 7”, on its 10th anniversary. As much as I love Chinese animation, in this particular instance, I feel safe in the hands of the creators of Wallace & Gromit. The stop motion animation of Aardman Studios does hark back to Te Wei and Jin Xi’s puppet stop motion classics of Shanghai Animation Studios in the 1950s and 60s.

“Shaun the Sheep” is out now in cinemas nationwide. If you’d like to read more about the Chinese zodiac:

If you’d prefer something more cultured, go for Project New Moon. China’s 2013 lunar landings not only had a huge political impact internationally but also a social and cultural one on the nation. Science Fiction has burgeoned as artists and writers seek to create new myths and stories alongside the old ones of Chang’E and her Jade Rabbit. Chinatown Art Space has invited several artists such as established composer Ruth Chan and choreographer Quan Kien Van, to explore the theme of China’s new relationship with the moon. Performance elements include Western Chinese musical fusion, elemental dance and visuals poems that explore ancient myth with modern science.

INDULGE IN A FEAST

What would a New Year celebration be without a great meal! Whilst it’s stillusual for Chinese families to create sumptuous feasts for Spring Festival at home, before venturing out to eat in the subsequent week with friends, it has become a little more common for restaurants to offer New Year menus from New Year’s Eve onwards! Shikumen, who officially opens their Shepherd’s Bush branch on February 19th (New Year’s Day), have a whole New Year set menu, complete with delicacies, including a “Ten Treasure Poon Choi”, stuffed with fish, chicken, ribs, and practically any good thing you could imagine. It’s an opulent meal, but at £58 a head (minimum 4 people), it had better be!

The Xin Nian set meal is available from 18th  February to 5th March, and must be booked at least 24 hours in advance http://www.shikumen.co.uk

If you’d like to read a review of Shikumen:

I realize this has been quite London centric. Next year, if you are holding events during or around Chinese New Year outside London, I would love to hear from you.