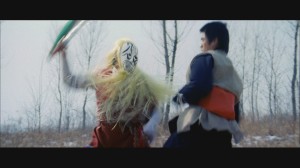 It’s been a big autumn for Shaolin in Britain, what with the European Shaolin Festival in October, followed by the re-release of 1984 kungfu classic Hero of Shaolin by Terracotta Distributions on the 10th of November.

Directed by Cheung Kei and Dai Che, multiple award winning Hero of Shaolin stars Taiwan Tae Kwon Do champion Alexander Lo Rei and Eagle Han Yin, and was dubbed the “action movie of action movies”, “the kungfu flick of kungfu flicks,” by the original Chinese trailer, which also informs us that actors “risked their lives” during filming (possibly due to the lack of stuntmen and low budget). Both the Chinese name 武僧 (“Wu Seng”) , “Martial Monks” and the original English title, “Ninja Vs. Shaolin Guard”, are further indications that this classic was made for the hardcore kung fu action fan, and story be damned!

Four monks from the Shaolin Temple embark on a mission to smuggle the Golden Sutra to Tibet after the Abbot is betrayed  by their traitorous teacher. They are joined on their quest by a beautiful maiden, out to avenge her father’s death. Their travels are made harder still by the seemingly endless waves of deadly ninja assassins, vicious gangsters, bow wielding hunters, and even the undead.

Set against the downfall of the Qing Dynasty and the rise of power-crazed warlord Yuan Shikai’s briefly seized control of China, we see Yuan’s eunuch and assassins sent to Shaolin to snatch a hand written sutra. Our heroic monks are very much fighting a miniature version of a nationalist battle in their backwaters, further underlined by the use of ancient war song “General’s Command” (known by most as the theme music to “Once Upon a Time in China”) accompanying both our hero’s and villain’s training montage.

Once the eunuch and teacher’s plan has been discovered, and the four heroic monks flee the Shaolin temple, the film follows the genre’s traditions, much adopted by Shonen Jump fighting manga. Our heroes have to defeat increasingly powerful opponents on their quest, culminating in a face-off with their arch nemesis. Apart from the demonstration of real solid Shaolin kungfu, alongside operatic displays of agility, each fight sequence with the assassins is fantastically theatrical, with ethnic costumes, traditional masks, ninja smoke bombs, sliding coffins, and super human arrow dodging.

Comedy and humour balance out the long fight scenes, with brotherly slapstick fun between two of the monks, with the youngest providing our main source of comic relief, acting out the playful monkey role. He’s the instigator of slapstick tricks in the initial stages, coy letchery with the introduction of the beautiful maiden, and by-the-book clowning when he has a run in with the sword wielding ghosts of the abandoned mansion, snuggling up to one, mistaking it for his lover.

I’m not surprised that the re-release has kept the original corny English dub of the 80s. It’s the fights, not the dialogue, that are the main draw in this film, and the whole piece could probably be presented without a line of dialogue.

Our hero, 1st Brother, played by Alexander Lo Rei, seems to have been grown from the DNA of both Bruce Lee and Lou Ferrigno, though the repeated flexing of those big muscle and bulging veins suggests more Hulk than Dragon.

Combined with the superheroic soundtrack, painted in eyebrows that look like they might fly off at any moment, and villainesses who rely on what I can only describe as boob fu,  make this a lad’s night in film in the best traditions of VHS junkies. Fans who saw this in 1984 can really indulge in the nostalgia of this oldie, which is presented in a visually scrubbed up version, with only the dub to let you know why these guy are beating up those other guys, not that it really matters.