Aug 25th A Recapitulation of LonCon3

Having worked and attended a select handful of “Geek” events, I was hugely excited as I headed to LonCon3, this year’s WorldCon host. Before I begin, I want to say the biggest Thank You to Kate Nepveu, and her excellent “Con or Bust” project, any spare money I have goes to promoting Chinese culture, and without the project, I would have been unable to attend.

From the moment I stepped through the entrance at the Excel Centre, and looked out over the fan village, I was grinning. The green display space was full of attendees indulging in a free Tai Chi class. We picked up our badges and guidebooks with relative speed, and I began to flick through the thick, ring bound convention programme. There were so many in depth panels, talks and presentations, on Sci-Fi, YA, comics and so many other alternative fictional genres on screen and on paper. But certain ones became a 100% “Must Attend”.

WorldCon first entered my radar in 2012, when Ken Liu won the Hugo, Nebula and World Fantasy awards, with his “Paper Menagerie”. A Chinese Sci-fi author I became acquainted with last year, had arranged to meet me at this year’s LonCon, but was ultimately, unable to attend. I did meet another wonderful fantasy writer from Shanghai, some of whose stories are steeped in the Wuxia tradition and Chinese mythology, and we are working together to bring her stories on English readers.

Along with “Understanding Translation”, and “World at Worldcon” panels on China and South-East Asia,  I was delighted to see a “Chinese Diaspora Sci-Fi” panel. It was both touching and refreshing to listen to John Chu, a writer and translator so influenced by the older American Chinese Sci-Fi of Ted Chiang, as well as the Western classics, and so passionate about new China originated Sci-Fi writing. It was also great to listen to Derwin Mak, an American writer of mixed East Asian origin, also a great historian. Mak made the very important point that Sci-Fi is as much to do with history as the future, and whilst people in Western history such as cowboys and sheriffs are extrapolated into the future by Western Sci-Fi in the forms of space pirates and fleet captains, immigrants like the Chinese miners and rail road workers in Canada seem forgotten, until works emerged from authors such as Ken Liu. I really could segue into the use of Chinese in the cowboy-esque world of Firefly, but I shan’t. Not here, anyway.

Indulging in my own geeky desires, I wish there had been more seats available in the Doctor Who Restoration panel, as we were among the numerous attendees who had to wait outside the room for others to leave, for a rare chance to see footage of early Doctor Who stories, along with clips of Asimov’s Out of the Unknown, both in their original degraded form, and brilliantly restored. Hearing about the state of the BBC archives, and the issues surrounding the restoration of genre classics was fantastic, and I learned a lot, from things such as interlaced films in an age of progressive display, to quite how makeshift the filming, transfer and storage equipment at the BBC has been.

Other interesting panels I attended were “The New Supers: How Superheroes and Superheroines are Changing in Comics”, hosted Roz J Kaveney with Mike Carey and Helena Nash among the guests. It was great to see that characters such as Captain America and Thor have become so memorable in the minds of the world’s collective readership that different people can take up and still maintain the mantles of those roles whilst allowing the writers to explore the different issues that come with the new person. There have been interesting changes and updates to comic characters outside the Big Two, such as Captain Britain, and they need more press coverage.

My favourite panel though, was “Pygmalion’s Statue and Her Synthetic Sisters”, by Paula James, which looked at the evolution of Ovid’s myth not only in the works of Burne-Jones and George Bernard Shaw, but more updated incarnations of Galatea as Madeleine in Hitchcock’s “Vertigo”, April in “Buffy: the Vampire Slayer” (TV) and in Angela Carter’s “The Loves of Lady Purple”, “SIMONE” and “Lars and the Real Girl”. This is an ever evolving myth because the artists statue, by nature, evolves with the artist’s desires to shape it.

WorldCon is a meta-convention, which is attached to pre-existing events, by popular vote, thus traveling the globe, and if not taking its attendees with it, then opening the world of science fiction and fantasy to new audiences.

I was very pleased to see a China bid stand to welcome WorldCon 2016, though upset in equal measure, that it was unattended all day. Whilst waiting for the official team to return, we were approached by people interested in the bid, so rather than send them away to return later, or more likely, to the Kansas City bid table, we read up on their bid, and began to promote, talking to people about what a cool place Beijing would be to as the host city, being a true metropolis, but still steeped in history, with one cornerstone of its literature being fantasy stateplay that makes Game Of Thrones look like a spat at a village fete.

Moreover, for many fans, China would provide the truly alien and otherworldly experience usually found only in Bradbury or the like, with the safety net of, if the alien language, and culture of China overwhelmed them too much, McDonalds and Starbucks being numerous enough to act as cultural escape pods.

China’s bid was a little outgunned by the Americans, though the Sun Wu Kong style rings being handed out alongside the cut out dragons were a nice touch. The stand was decorated with two pop-up banners, featuring the Transformers Optimus Prime, and Megatron, styled as ancient Chinese warriors. Somebody needs to give this guy a comic to illustrate!

Whilst China did not win the bid, I nevertheless had to opportunity to meet some like-minded people who run a monthly scifi short story competition in China, a lecturer interested in Chinese fox demons, and of course John Chu, who I’m glad to say, walked away with a Hugo award for his story “The Water That Falls on You from Nowhere”

Hopefully I have made new friends, and found a whole world of things to bring to you, So there may be more Chinese originated scifi in English coming your way soon. 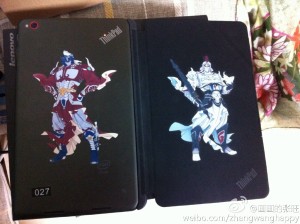