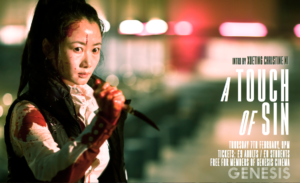 As China began exporting its movies in the 70s and 80s, a cult of fandom grew around the kungfu and action films. From “36 Chambers of Shaolin” to “City on fire”, these films made a deep impression on young American filmmakers-to-be, most obviously Quentin Taratino, who took heavy Inspiration from these films for “Reservoir Dogs” and “Kill Bill”. However, inspiration between vibrant creative cultures becomes a conversation, and those elements Tarantino borrowed, were absorbed by a new generation of filmmakers in China, including Jia Zhangke.

Jia has had an interesting career. Starting off making mockumentary-style films about petty criminals and China’s disaffected youth, and now having reached such critical acclaim that he has over 100 international awards and nominations. His films still deal with how ordinary people’s lives were affected by China’s rapid social change, and “A Touch of Sin” brings many of his themes together, to tell stories about outcasts and misfits, in a manner more akin to traditional Chinese storytelling.

(First delivered for the Spring Festival screening at Genesis, London, 2019).