Pandas are one of the most universal symbols of China. As an endangered species, their cute and cuddly image have touched countless hearts around the world, transcended political and cultural barriers. They are the logo for the World Wide Fund, through which you can adopt a panda, get cute photos and updates on their lives. Not to mention the hundreds of panda related items we fill our lives with, from cuddly toys and cartoons, to accessories and stationery. Yet throughout recent history, despite their constantly adorable fuzzy exterior, some have remained undeceived.

They know what pandas really are, bears with attitude. 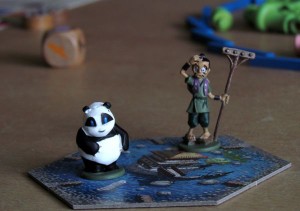 Take the award winning “Takenoko”, distributed in the UK by Esdevium. The players take the role of a farmer who tends and irrigates an expanding field of rare bamboos for the Emperor of Japan. Chaos ensues as the Emperor’s prize gift from China, an ever hungry panda, is sent to munch on other players’ crops and steal their points. Whilst feeding the panda select bamboo is one route to winning points, its main role is to mess up the other players’ strategies!

Perhaps because pandas are so cute and irresistible, we all know, deep down, we just can’t say no to them. None have expressed these deeply ingrained feeling more eloquently than Elephant Cairo’s awarding winning “Never Say No to Panda” advertising campaign for Panda, the Egyptian cheese and dairy manufacturer. The ads feature a most endearing and innocent looking panda, who unleashes destructive havoc on those who turn down the chance to eat Panda cheese. In offices, shops and restaurants, the panda suddenly appears, accompanied by the wistful tune of Buddy Holly’s “True Love Ways”, before causing calculated damage, letting you know worse is to come if you don’t pick up some delicious Panda cheese.

Whilst this may be the most well known example of the Evil Panda in advertising, it’s certainly not the only example. With an air of dry British humour, the git panda did wonders for Knorr’s “Chicken Tonight” in the noughties, where an unscrupulous panda, bored of his bamboo diet, escapes from the zoo at night, drawn by the irresistible smell of the product, to snatch away hot meals from under the noses of their intended diners. If a panda likes it with rice, it must be good. The northern British cadence of the Far Eastern animal is certainly an added dimension.

When it’s not cheese or chicken which turns a panda evil, it’s a love of “bwiscwits”, and in 2013, Fox’s buiscuits introduced us to the diminutive, aggressive, mafia panda boss, Vinnie. Lounging in a luxurious leather armchair and sporting the fuzziest tummy that just makes you want to tickle it, Vinnie orders you to choose none but Fox’s, in a full on Goodfella’s New York mix of light hearted reccomendations, and underlying threats of violence.

Whilst these portraits of pernicious pandas are humorous, they are only confirmed by the behaviour of the real creatures in their habitat, when a stranger intrudes.

Pandas are affectionately named 熊猫 or “bear cats” in Chinese, but even cats can be vicious. Never forget that pandas are bears. But they are just so fuzzy, cuddly, adorable and cute that they can just about get away with murder. Literally in some cases, as the folks tracking the monochrome menace, over at http://www.whenpandasattack.wordpress.com can attest! 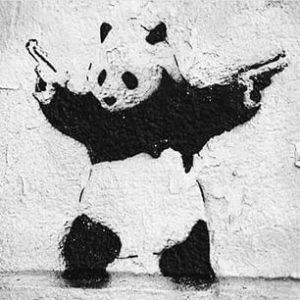