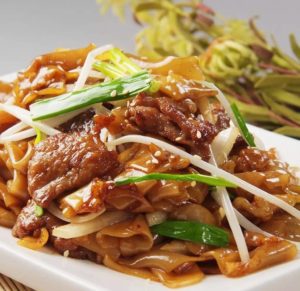 Anyone who’s been born into one culture, and transplanted into another, will understand that the idea of one’s hometown becomes more defined after one leaves it. There are many ways in which home can be remembered, some of the most distinct ways are smells and tastes. For the gourmet and food-obsessed Chinese, everything is closely connected to food. There are tens of thousands of ways in which my hometown lives within me, many of them associated with Guangdong’s world-renown cuisines. There is one dish which, if I tasted anywhere else in the world, would bring me right back to Guangzhou, this is the 干炒牛河, Gon Chau Au Hoh, known in English as the Beef Chow Fun.

Beef Chow Fun is a speciality of the Guangdong region, and consists of slices of beef, spring onions and bean sprouts flash fried with fresh (not dried) hofun – wide, flat rice noodles from Sha He (Sa Hoh in Cantonese), a town in the city Guangzhou. It’s a very common dish in restaurants and street stalls alike, popularly eaten at lunch or shared along with some congee during Yum Cha (Cantonese morning tea, or dim sums).

As a child in Guangzhou, I had consumed it countless times and in countless places, ever since I could remember. My most distinct associations with the dish are: carrying it home from my mother’s work canteen (government bureau canteens housed some of the country’s best chefs) in an aluminium lunch box for wuxiu (lunch and siesta),  the unmistakable aroma wafting out as soon as I opened the lid; in the sweltering summers, when she had time for wuxiu, my mother rustling up two plates of beef chow fun, together with a light soup of tender choy sum and dried shrimps (all ingredients bought daily fresh from local markets, like everything else), which we would eat while listening to traditional Cantonese wuxia storytelling on the radio; being treated to the kuey teow variation of the dish by relatives from the Teochew side of the family.

Nowadays, Beef Chow Fun mainly refers to the dry fried beef hofun, as opposed to the one that is thickened with a cornstarch-based sauce. The dish was said to have come into being in occupied Guangzhou in the 1930s, at a Zok Fun Meen stall, congee and noodle stall, one of the typical eateries in the city at the time, apart from teahouses and restaurants. In those days, rice noodles were mainly cooked in sauces. One day, the stall had run out of cornstarch, but a customer insisted on having fried noodles, so the chef had no choice but to improvise. He fired the wok up to scorching, threw in a few slices of meat and vegetables before chucking in some hofun, quickly flipped them around a bit and served it up to the demanding customer, hoping to get rid of him. The customer returned every day, asking for the same thing.

Nowadays, restaurants in Guangzhou often add Chinese chives to the mix and offer supplementary chilli oil or garlic chilli sauce. The fragrance of the alliums offset nicely the taste of succulent tenderized beef. As the hofun slides smoothly into your mouth, it feels smooth yet just chewy enough when you bite into it. Your palate is filled with a distinct ‘smoky’ or ‘burnt’ aroma. This is known as Huoqi, an intangible aroma that can’t be traced from any sauce or ingredient, but is the result of complex chemical reactions when the food is cooked in iron crockery at a very high temperature, as part of the Chinese cooking technique of gohuo (wrapping the food briefly in a warm orange flame). The aroma is very hard to define yet, highly valued in Cantonese cuisine, and something I try to replicate in my own flash fries.

Although it sounds simple, but the Chau Au Hoh is not an easy dish to perfect, it must be done quickly, crisply and without hesitation, but not so abruptly or with so much force as the break the tender fresh hofun, nor should they stick to the wok, or be overly greasy. A great plate of Beef Chow Fun is a good measure of the skills of a Cantonese chef.

After my family moved to Britain, the dish would still be a frequent lunch, often with pork slices replacing the beef. Needless to say, it never tasted the same as the ones I had eaten in Guangzhou. I don’t cook or order it often myself, for the very same reason. Yet, wherever I come across this dish abroad, not only does the sight, smell and taste of Guangzhou, Beef Chow Fun come right back to me, but bustling arcaded streets, the morning hubbub of teahouses and winding, cicada-serenaded alleys under the hot summer sun.