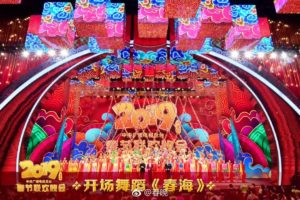 The Chun Jie Wan Hui, CCTV’s New Year Gala, (often just referred to as as Chun Wan), is almost as old as I am, though there had been televised celebrations of a more artistic nature broadcast on and off since the 1950s. On every New Year’s Eve, after the huge meal, my family would inevitably gather round, and watch through four or five hours of this state produced extravaganza, keeping us awake til the small hours of New Year’s Day with the pomp and majesty of costumes, lighting and stage sets; and the relentless exuberance of acts trying to out ham each other.

My favourites were always the Xiao Pin skits, comedy sketches and cross talks, all a humorous diversion from the long and worthy musical numbers, but also giving a pulse check on the times. The sheer size of the show’s audience meant that expressions and aphorisms coined in the evening’s performance, would become nationally understood memes, even in an age before the Internet.

Even moving to Britain didn’t prevent my family from following the tradition. Access via Satellite TV, along with long-play video tapes, allowed my father to time-shift the show and inflict it on us when we were too stuffed with Jiaozi, fish and New Year candies to evade it. After I moved out to my own place, I was relieved not to have to sit through five hours of conspicuous display and exhausting jolliness, though I can’t say I completely avoided it.

I now celebrate Spring Festival with my own friends and family, and having the Gala on in the background brings, a special kind of festive vibe that seems to instantly connect me to China, though I am thousands of miles away, whether we are preparing the dishes, or arranging the flowers and decorations. We managed to stream the programme to tablets this year, perched on the edge of over-stuffed worktops, but with the constant ping of WeChat messages, I was fully aware that I wasn’t engaging in the full Chun Wan experience, with new technologies offering shared multiscreen experiences, Hong Bao lotteries, and generating much speculation on social media regarding leaked content, or controversy over the artist selections. Nowadays, if China takes an interest, so does the rest of the world. Even English-language platforms are live-streaming and live-tweeting this incredible show.

Everybody knows that the gala is an unapologetic piece of flamboyant state propaganda. Nevertheless, looking at the changes in content over the years, and what the Gala chooses to focus on, gives us some insight into how China sees itself and the nation’s preoccupations.

The central messages of “Our Beautiful Motherland With All Its Happy Minorities and Great Heritage”, has given way to one of “A New And Transforming China That Is Sure Of Its Place on the Global Stage”. Amidst the unwavering tones of optimism, there is a call to rise up and meet the changes the country is facing. 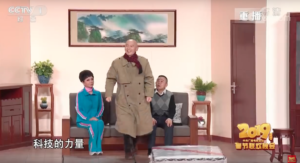 Some things never change, staples of the skits are preoccupations with health, longevity and the Journey Home for Spring Festival. We’re often treated to the humour of petty criminals and swindlers, who, no matter how conniving they are, or how incredibly gullible their targets, always end up getting caught by the end of act. This year’s themes also address the mounting pressures on office-workers and the struggle of older, single professional women who don’t meet their family’s expectations.

With China well into its space age, fascination and awe of its Taikonauts have also filtered down to the everyday lives of its citizens. In the Xiao Pin ‘Here Comes “My Son” ’, the swindler portrayed by the film star Ge You, manages to extort further cash from the old couple of buy his “space sleeping capsule”, which he claims to have helped one of his former colleagues grow a new head, after an accident with the office door.

Of course, China’s space age ambitions also made themselves felt in the more folk-orientated elements of the show, where the line up of regional artists performing traditional dances from their area, shared the bill with the 540 dancing robots (and an assembly of drones) in my home city of GuangZhou!