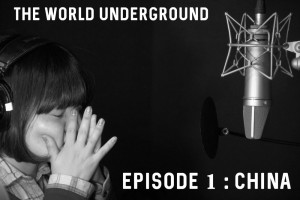 A few years after my Peking into Punk talk, I was recommended by some musicians in Beijing to Chicago journalist John Yingling, who was about to embark on his mammoth project of documenting the world’s underground music scene. He decided to go in at the deep end, to China, for the first episode.

We discussed approaches before John began his journey and I worked with him on this opening episode as consultant and head translator. John went to many cities in China, not just Beijing and Shanghai but Guangzhou, Chengdu, Wuhan and Changsha, meandering through the local neighbourhoods of backstreets and alleyways, seeing the real China, eating proper Chinese food, and talking to musicians and artists at studios, live venues, rehearsals rooms and other creative spaces, allowing them to speak freely in their own language.

As well as translating a large proportion of the audio from Chinese to English, I edited the works of the other translators to ensure that all the subtitles were localised in English and consistent in style and tone.

You can watch the documentary here. Please donate to this very worthy and eye-opening indie project.