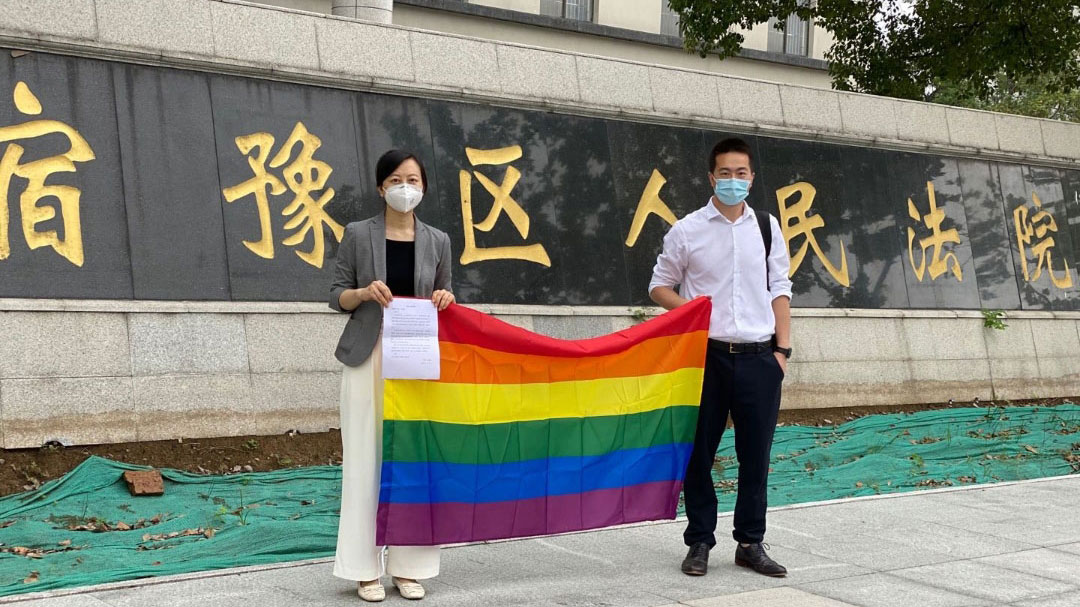 A few years ago I started a series on LGBTQ+ in China. Despite the cancellations and shut-downs, it was a hopeful time, the internet had brought the public closer to the concept of queerness, established groups organisations were supporting communities whilst improving public awareness. Campaigners were continuing to sue for change in educational materials and the few festival were braving the storms. A few years later, the clamp-down has tightened, especially in the media and on public events. All in all, the enthusiastic bubbling of activities seemed to have quieted down. This doesn’t mean that communities no longer exist, or groups are no longer at work. In fact, many legal battles have been fought in the last few years, some more successful than others, but they have all generated a lot of public debate and amply demonstrated the gaps in China’s legislature with regards LGBTQ+ rights.

Whilst studying in Guangzhou, university student Xixi (pseudonym) came across a description of homosexuality in Jinan University’s Student Psychology Guide, as a “common psychological impediment”, an “inversion of sexual attitude” and a disorder. She thought that had she not been better informed about her own sexuality prior to reading the textbook, she would have been led  to suspect there was something wrong with her. Xixi wrote to Jinan University Press, which replied to deny there was a problem with their teaching material. So in 2017, she sued the publishers and the selling platform, having to resort to the grounds of inadequate quality and misinformation. Meanwhile a new edition of the book was published, but with much of the wording on homosexuality unchanged. The court assigned three organisations to appraise the textbook, but subsequently announced that none of them had the aptitude to do so, leaving the case unheard.

Xixi didn’t give up and applied for a third deferred trial. Her efforts paid off, three years after she initially filed the case, it was heard in the court of Jiangsu this July. The verdict is yet to be announced. I hope she will have more success than fellow Guangzhou university student Bai Qiu, whose formal complaint against the Guangdong High Education Press for publishing homophobic content in a psychology book was ignored in 2014, and who lost her case against the Ministry of Education in 2016.

During an interview, the author of the textbook in Xixi’s case claimed that the teaching material had been following the guidelines of CCMD-3. The case demonstrates that even though in 2000, homosexuality and bisexuality were removed from the Chinese Classifications of Mental Disorders 3 (CCMD-3), some mental health professionals had not realigned their professional opinions to this change of law. A breakthrough had been made on a national level, but not implemented on civic levels, hence citizens have been unable to benefit from the change. Little coordinated action seemed to have been taken to re-educate those at various levels of authority in different sectors of society, nor have there been measures to hold them to account if the change in law isn’t reflected in their professional conduct.

Transgender Discrimination at the Workplace

A break-through was made as early as 2017, when a plaintiff (known as Mr C) from the south-western city of Guiyang, a transgender individual who identifies as male, filed a case against the health clinic where he worked, for dismissing him from his job for dressing inappropriately (“like a lesbian”) and being “unhealthy”. The court of Yunyan in Guiyang ruled that the employer had dismissed Mr C on grounds unrelated to his contractual obligations, violated his right to equality of employment and caused him psychological distress. Mr C received compensation and back-payment of salary.

Less successful is Jessy Ma, a transgender individual who identifies as female, who sued her employer for compensation and a public apology in Hangzhou. They had asked her to resign two months after her gender realignment surgery. Earlier this year the court ruled against Ma on the grounds of insufficient evidence, Ma has appealed and the verdict of the second hearing is yet to be determined.

July saw another victory for a transgender employee of Dangdang.com (e-commerce site in China) who was fired after having gender reassignment surgery. What has also made this a landmark case is that the court of Beijing openly addressed the issue of gender intolerance, and called for a more inclusive society in the final judgment.

These cases illustrate the challenges faced by transgender people (an estimated 4 million) in Chinese society. The right for transgender people to change their official identities has actually been legal in China for over a decade, a law was passed in 2008 by the Department of Public Security giving them the right to re-register their identity cards and hukou. The Department of Health followed this up with regulations on gender-realignment surgery in 2009. However, the legislation focuses on technical requirements and offers little protection for those undergoing the surgery. Moreover, there is very little post-surgery support in place for transgender people, or any legal protection in key sectors such as education and employment, leaving those who’ve undergone surgery and changed their ID with qualification papers that are no longer recognised as valid and facing discrimination in the jobs market.

Betty Zhang, whose relationship ended with her lesbian partner of nine years last November, was kicked out of their home in Beijing and denied access to their two children. Refused helped by the police, Zhang filed a child custody case in East China early this year, which was accepted by the court of Zhoushan.

Betty is one of tens of thousands of same-sex parents in China, thanks to a network of surrogacy agencies dotted around the country and law firms that specialize in representing LGBTQ+ clients. According to PFLAG, some 100,000 children in the country are being raised by queer couples. Some of them go through mountains of legal processes regarding guardianship and custody to work around the lack of protection. But like most heterosexual couples, LGBTQ+ couples should not have to become legal experts, or think about things such as breaking up, just to go through what should be a natural part of their lives.

Currently, the legal guarantee within Chinese marriage law for adoption and equal property rights, and for both parents to retain parental status to their children, only applies to heterosexual couples, and doesn’t extend to same-sex marriage, which is in itself not legally recognised in China. Because both of Zhang’s children were born from her partner’s eggs, Zhang doesn’t even have the right as the biological parent. And surrogacy is still illegal in China.

What is positive and historically unprecedented, is that the court accepted Betty Zhang’s case as a valid one. The case sparked off heated discussions in social media and social attitudes towards same-sex parents are becoming more tolerant. I hope the court will recognize Zhang’s relationship with her children. This time last year, the courts of Nanjing and Beijing joined those of some other regions in legalizing joint guardianship of children between same-sex couples, though the news had been somewhat suppressed in the media.

In my next article, I’ll be discussing China’s LGBTQ+ communities and the cultural, social challenges they face.