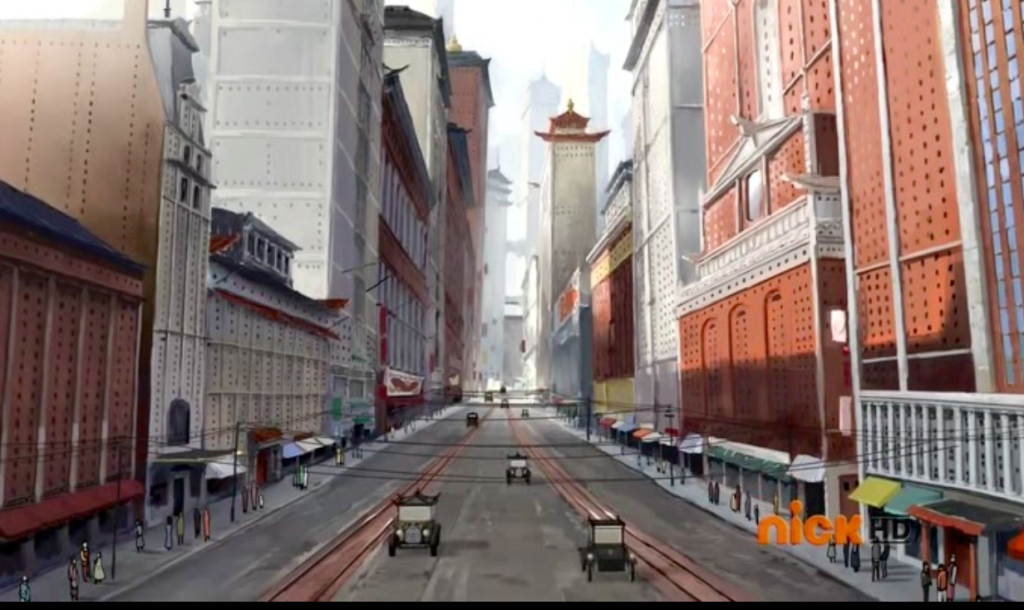 As Avatar: The Legend of Korra Book: Change, has just started airing on Nikelodeon, I wanted to write about the Chinese elements in the series. The whole of the beautifully drawn and conceived Avartar series, including The Last Airbender, which a whole generation of fans grew up with, is steeped in Chinese culture. Whilst Aang’s journey through a Wuxia inspired landscape clearly drew influences from traditional Chinese and other Asian cultures, I want to focus on Korra, as the cross-over between East and West, ancient and the modern, has achieved some very interesting results.

Considering the themes of cultural dynamism, revolution and development, Legend of Korra draws from an ideal time in China’s history, for both thematic and visual inspiration. 1930s Shanghai was once referred to as the Paris of the East, or perhaps more accurately, the New York of the East. As the millennia old imperial system was crumbling, the foreign powers of Europe and Japan wrestled for control of China’s ports, whilst gangsters engaged in turf wars and lucrative deals with colonials. Liberal thinkers and students fervently debated the future of a new China, while the glamorous elite rubbed shoulders with foreign oligarchs, to the sound Chinese jazz and blues. All sorts of political parties sprung into being. Whilst in my second article, I’ll write about the influences of Chinese history and politics, I just want to focus here, on the wonderful visual cues present in Korra’s Story.

During the Cultural Revolution of the 60s and 70s, the oversimplification that everything old was bad led to a scorched earth policy, crippling not only the country’s industry and agriculture, but destroying much of China’s heritage.Whilst China has quickly rebuilt its industry and its agriculture to an extent, its culture is honoured, but not cherished, like a commodity.

In Korra’s world, built under the art direction of Joaquim Dos Santos (the talent behind so many of DC’s fantastic animated movies, as well as the original Avatar), shows a world in which Chinese cultural momentum keeps pace with modern design, influencing clothing, architecture, and even automotive design.

Whilst Republic City, the main city in Korra’s world, is far more Western than anything from Aang’s day, compare it to the Chinese metropolis of the 1930s, which would have been heavily influenced by Western styles such as Art Deco and the works of  Western architects like Louis Sullivan. The ability to build according to the new influx of styles would have been a great sign of wealth and power, but tradition would have also led to keeping forms of 亭台楼阁 (Ting, Tai, Lou, Ge), leading to a fantastic fusion of styles, much as is seen here.

亭, Ting, are the most Chinese of Chinese architectural features, the pavilion, which have been around since at least the Han Dynasty. Characterized by its pointed roof and up-curving corners, a pavilion can be square or circular, usually built with either four, six or eight corners. Originally built to provide leisurely rest for visitors of outdoor scenic spots, pavilions were subseqently placed in parks after the urbanisation of Chinese society. Republic City features countless pavilion-like structures perched on top of tall buildings as well as the curved, colourfully glaze tiled roofs with so characteristic of Chinese architecture.

台,Tai are the raised, flat surfaces, rather like a terrace or a platform, where the ancient Chinese carried out important formal activities such as religious rituals and inauguration ceremonies,  ever since the time of the first ruler of China, later extended to performances such as dances, literary composition and governing of state affairs. The park where Korra first rests, upon coming to the big city, features many of these platforms, but there’s a more important Tai in the series. The Pro-Bending Arena in Korra is an oversized Tai, not dissimilar to the kind, for example, used by the King of Yue for martial arts training and demonstrations.

楼 Lou and 阁 Ge are the multi-storeyed buildings, all traditionally square, with balconies gracing the Ge’s sides. The hallmark of Republic City architecture is the blend of angular Art Deco with these traditional buildings, sometimes as simply as a western skyscraper, topped with a Chinese tower. That uniform square structure to the grand buildings of the city definitely give the city a traditional look.

I love the level of detail with which the creators have permeated traditional Chinese architecture into the modern design of Republic City, from the patterned metal grill and window of  houses on side streets, to the arched bridges in the broader cityscape shots, to the circular archway inside the Triple Threat Triad headquarters, to the fencing around the statue of Aang. The chairs, the wall and ceiling motifs inside the police stations, not to mention the lanterns everywhere… all harken to the shows sinophile origins. Add in the Chinese shop signs, posters, and even the dragon decorated ship’s funnels in the harbour, make me feel like it could actually be a place in the country of my birth.

1920s Shanghai was also where China was introduced to one of its most loved imports, the automobile. Years before the likes of JiLi and GAC, cars were imported, and were the reserve of the upper classes, with no means of production. One of my favourite elements of this new series, is the  “what if” fancy, of a wealthy oriental industrialist designing and building cars, whilst culture was continued. Could china have ended up with those beautiful vehicles from Korra’s world? With curved roofs, Chinese patterns on the windows and grill, almost like 轿 （Jiao）sedan chairs on wheels. The Chinese word for car is still 轿车 (Jiao Che). The military vans and airships are less refined than the “Satomobiles”, but still show their Chinese influences. The cloud-like curves to the armour plating, invoking, at least modern interpretations, of traditional Chinese armour. The vehicles are not wholly Chinese in their design. Trams feature Rene Mackintosh styled windowpanes, the thug’s limo, decked out in a golden lion head and pink exteriors, is a nod to modern, or at least 70s opulence, and the traditional rickshaw that Asami and Mako take on their date owes as much to Stevenson’s rocket.

The art directors have turned to China too for inspiration on clothing. The men’s clothes in Legend of Korra is a distinctive mixture of 18th, 19th century Western stockings and breeches, Chinese high mandarin collars, varying between military designs, and Chinese state uniform where appropriate. More notable characters in the town’s hierarchy also include waistcoats, fob watches and even pince nez, along with their very oriental mode of dress. It is interesting that the various styles of Western military surtout adapt so well to the lines of the Chinese cheongsam, that Chinese buttons look perfectly natural on uniforms worn by Mako and Tarrlock, while the long sashes hark back to pre-Qing dynasty, where long gowns are folded and secured this way. The designs skillfully incorporate  Chinese lines and detail into the 19th century style men’s capes clothing, the ornate Qing style silk collars running down into the frock coats. The creators of Korra certainly had fun drawing Chinese tassled skullcaps and Wusha amidst the Art Deco fascinators and coronets.

It’s a shame there doesn’t seem to be as distinctive a style of clothing created for female characters. Possibly this is due to there being very few females characters whose regular attire isn’t a uniform or tribal clothing. Outside her uniform, Asami, the most glamorous female of the show, tends to wear 1940s European style, once appearing in a very Westernised keyhole cheongsam. Apart from the odd appearance of a loose, high collared dress in the background, female characters in crowds tend to be drawn in vaguely Western outfits from the early 20th century, with just a hint of Chinoiserie.

Whilst the look of the show is an important element, and one I am glad to see representing so many elements of Chinese culture, conflict and story is what drive any good series, and next time, I’ll talk about Revolution, Steampunk, and the overwhelming importance of tea.