Welcome to the second in my mini article series on Chinese ghosts – “Friendly Fiends”!

树精, Shujing
Shujing are spirits of trees that are hundreds of years old, believed to be rainmakers and guardian protectors with healing powers in their leaves and flowers. The leader among plant spirits, the Shujing enjoy tributes of food and drink. Old trees are very much venerated in China, it is said that if they are cut, they would bleed. The Shujing should not be confused with Pu Songling’s tree demons, depicted famously in Andrew Chan’s film “Chinese Ghost Story” (1997). 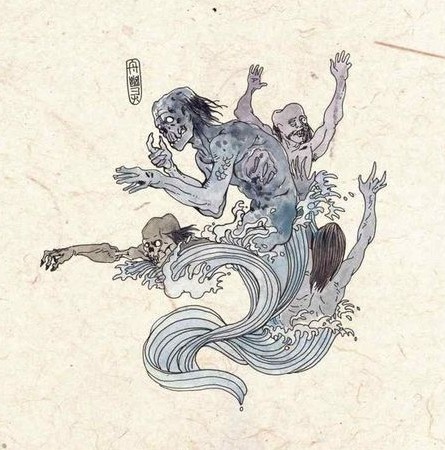 舟幽灵, Zhou Youling
Their name literally means “boat apparitions”. These are souls of the drowned, said to appear at a beach in Hainan called the Weeping Ghost. Seen by those out at sea, they appear on the crest of waves and are believed to portent danger and disaster. Otherwise, they are mostly harmless. People out sailing who see them usually feed them rice, turn their ships and head back to shore, grateful for the warning. Artwork by He Xin.

狐鬼／狐仙, Hugui or Huxian
Believed to be spirits of deceased foxes that lie unburied. They like to reside in plates, bowls and other domestic objects. These are friendly ghosts, and not to be confused to fox demons. The benign spirits of animals such as weasels, foxes and raccoons (sometimes referred to as Wu Xian, the Five Spirits), were venerated in many places around China. Huxian has been the subject of many great stories in Chinese literature, such as Bi Gan’s 3rd century collection of supernatural phenomenon (Soushenji)  and Pu Songling’s 18th  ghost stories (Liao Zhao).

落头氏, Luotoushi
These are beings whose heads can detach themselves from their bodies, fly out and wander around while they are asleep, flapping the ears like wings on their wanderings. It’s vital not to cover the neck or the head would be unable to re-attach itself upon return, causing both head and body to perish. According to texts of the Jin era, these beings were a race that lived in the southern lands, where some insects also shared similar head-detaching abilities. The far south of China, known as Lingnan, only became accessible from central China when roads were built through the hitherto impenetrable Nan Mountains during the Tang Dynasty. Hence China’s historical fascination with the exoticism of the far south. 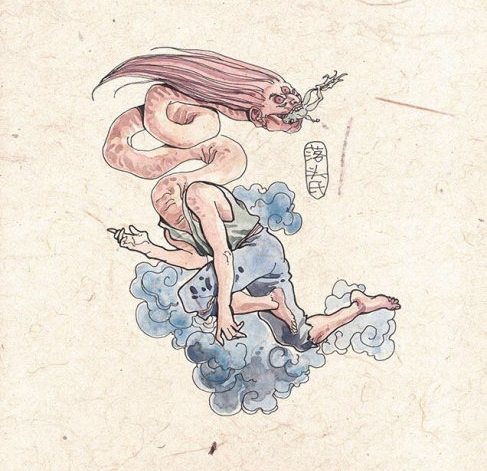 虎神, Hushen
The Chinese tiger god is a friendly and whimsical being, who sometimes appears in human form, other times in a human body with a tiger’s head. Hushen likes to tap people on the shoulders from the back and chat to them. Friendly yet powerful, Hushen can command tigers. If you’re lost in the woods and run into this being, you’re in luck. He likes to guide lost travellers through woods and forests.

黑白无常, Hei Bai Wuchang
These ghouls were believed to be the ghosts of a pair of inseparable friends who are in death as they were in life. They were given the task of hunting stray souls by Yanwang, king of the underworld. There has been, and still is, much love for this pair of ghoulish helpers in Chinese pop culture. You can read more about them here.

秃尾巴李黑, Tailess Black Li
Tailess Black Li is a black dragon without a tail, banisher of floods, venerated in north-eastern China. Legend says this black dragon was born as a boy into a family with the surname Li. When he turned into a dragon, many feared him as a monster. They cut off his tail. But Li Hei still loved his homeland. When the white dragon brought on the floods, he subdued them. The villagers regretted how they had treated Li Hei, so they changed the name of their region to Heilongjiang (Black Dragon River). The Bai minority in Yunnan have a similar myth that involves a dragon pearl and a little yellow dragon.

夜叉, Yecha
Fierce protector gods who devour ghosts and demons. They come in multitudes, some live in the human world, others in the heavens. Due to their demon-like appearance, they have often been seen as such in pop culture – vampiric and women-snatching haunters of the wilderness. The female yecha are generally better looking. Depictions of friendly yecha can be found in Pu Songling’s Liaozhai. These creatures appear often on tattoos and lend their name to one of my favourite metalcore bands, who are from Sichuan. 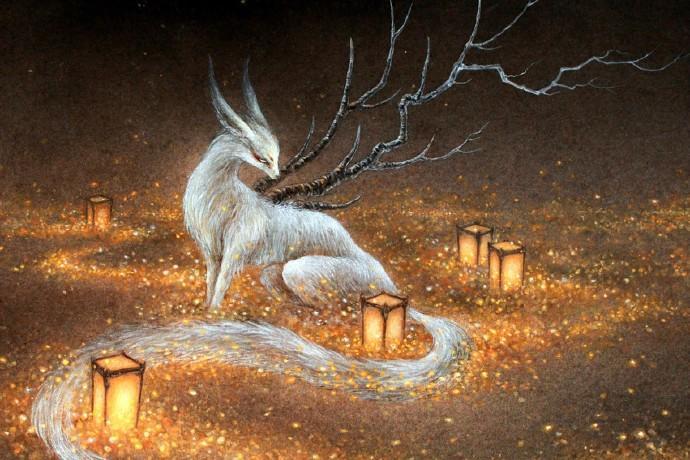