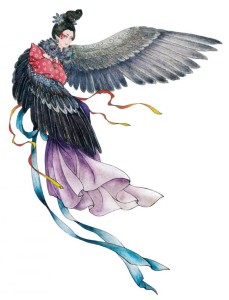 A bird demon that can shed its feathers and turn into a beautiful woman. Her favourite hobby is to snatch children at night. In the old days, children’s laundry had to be taken in before nighttime, to prevent the demon from dotting the clothes with blood, to mark her prey. Gu Huo Niao has graced the pages of classical and modern Chinese literature, and continues to haunt computer games not only from China but South-East Asia. 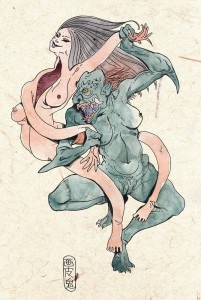 Their name literally mean “painted skin ghost”. They are green in appearance, with big gnashing teeth. They eat humans at night, and wear their victims’ skins by day, and usually appear as very beautiful women. They are believed to be ghosts of women who were horribly wronged during their lives, the essence of whose spirits have remained in the bones for hundreds of years after the corpses had decayed. That is why they look for skins to get round in. The Hua Pi Gui have been immortalised by Pu Songling in Liaozhai, enjoyed many on-screen TV and film adaptations for generations within China, and recently starred in a lead role in the globally released Painted Skin I and II. Hell hath no fury! Artwork by He Xin. 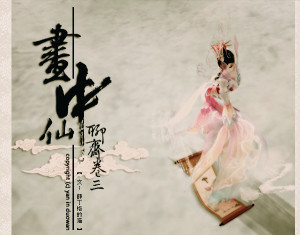 An immortal who lives in a painting, tied to the painting by the capturing of her image. Sometimes it’s a spirit or ghost in hiding that has possessed the painting. Usually female, she falls for the scholar who stands in front of the painting day and night, besotted by her image. At the end of the story she is often obligated to return to the painting, causing the painting to change. She is a popular literary and cinematic plot device employed in classical as well as modern works. 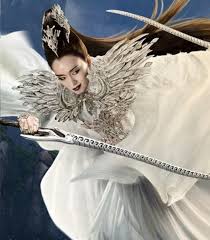 The White Bone Spirit is really a pile of bones from of an ancient female corpse. She can transform into her original living form, which is beautiful. She is both deadly and wily, and knows the human heart. Bai Gu Jing lives in her cave with her demon minions, and remains one of best loved demons in “Journey to the West”. Various designs of her appearance on film and TV since China’s classic TV dramatization of the novel in the 1980s, are excellent illustrations of the Chinese gothic. More recent adaptations such as the Zhang Jizhong 2011 TV series have treated her with more sympathy by providing her with a harrowing backstory. 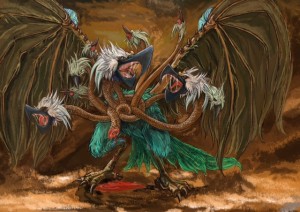 A nine-headed bird, an inauspicious being in ethnic Han myths. It was said to have had ten heads originally, but one was cut off by a hunter on the orders of Zhou Gongdan politician and thinker of Western Zhou (10– 8th centuries BCE). Blood gushing from its headless neck, the Jiu Tou Niao is believed to suck out the spirit energy of children. In the old days, during the time the bird was believed to appear, lights were extinguished very early and dogs sent out. The Jiu Tou Niao is well documented in texts of the Tang and Song (960-1279) dynasties. 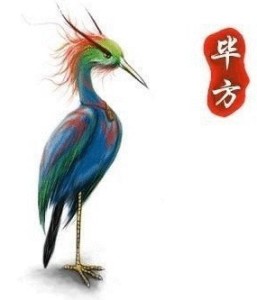 Named after its distinctive cry, this giant crane-like bird is believed to cause, or be the harbinger of fires. It was first documented in the Shan Hai Jing, a work dated around 3rd century BCE to 1st century CE, on the creatures, peoples, customs and geography of various regions of China. Some versions say that Bi Fang stole fire from the heavens and gifted it to humans. 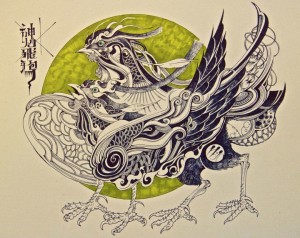 A bird shaped like a magpie with two heads and four claws, believed to have the ability of put out fires. Venerated in households in some regions of China, the Lei is both male and female. At the sight of a fire, it would flap its giant, magnificent wings, and the flames would be extinguished.

A plague monster with the body of bull, a snake’s tail, and a third eye on its head. It lives on the Taishan Mountains and has been documented in Shan Hai Jing. Where the Fei appears, rivers and marshes dry up, grass and trees wither, and plagues spread. Considering the similarity of the Fei’s appearance to Pantyhose Taro in the manga Ranma1/2, I wonder if someone from China had drowned in Níuhèmànmáorénnìquán?

A bird the size of a quail, with yellow fur and a red beak. Its flesh can cure plagues and parasites. 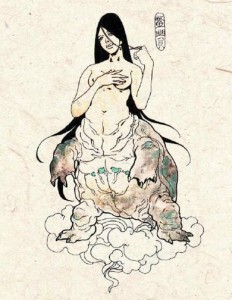 This is just one of the many kinds of turtle spirits in Chinese mythology. She is a temptress with a beautiful upper body and the lower body of a turtle. It’s a mystery whether she’s friendly or malevolent, as those who glimpsed her true form have tended to run away. 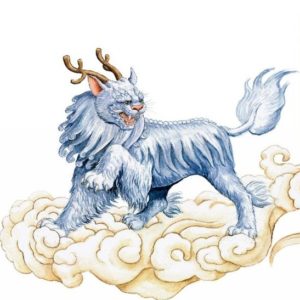 A very wise creature that could speak the language of humans and understand the secrets of all things and every being. It is said that the legendary emperor Huang Di caught it on his travels, and implored it to record the shapes and forms of all existing demons and ghosts. Bai Ze drew and wrote about everything it had found on a scroll called the Bai Ze Tu. This is how people came to recognize and keep themselves safe from different ghosts and demons. Who wouldn’t love a large, fluffy and very clever white cat! 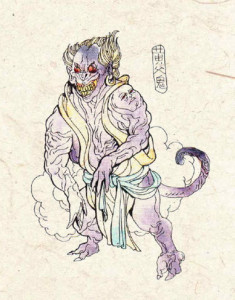 Said to be active around Hubei, a shape shifter, appears as mist, beasts or people, likes yellow clothes. He is lecherous, lives on a diet of other ghosts, laughs hideously at those he dislikes, causing death or crippling in the victims. Huang Fu Gui is documented in Shan Hai Jing and texts of the Song Dynasty.

Its name literally means “hanging on boots ghosts”. It likes to follow people around at night and play mischievous pranks behind them. So if you’re walking down a quiet alley at night, and you hear strange noises, or feel a creepy breeze on your neck, you might have a Diao Xue Gui at your heels. If you swing round, you won’t find it. Interestingly, in colloquial Cantonese, the term Diao Xue Gui refers to stalkers. 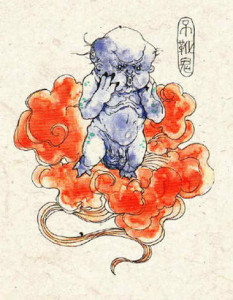 I hope you have enjoyed this collection of Chinese monsters. Any compilation of Chinese ghosts and demons would not be complete without China’s ultimate monster, the Jiangshi 僵尸. Originating in rural tales of the strange, Jiangshi have become horror and pop culture favourite in China and elsewhere in Asia. To read more about this see the articles below. 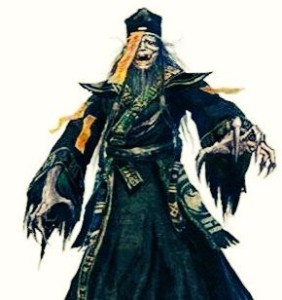 Over the last two or three decades, Halloween has become increasingly popular in China, alongside the revival of traditional festivities such as Ghost Month. Celebrations for Halloween in China at the same time as the rest of the world, but the costume choices would not necessarily be entirely of Western monsters. So you might see girls dressed up as sexy spider demons dancing with Dracula at the school horror disco. I hope this has provided you with an interesting, enjoyable read and some more innovative costume ideas for your Halloween parties.

To find out more about Ghost Month or the beings discussed here, please refer to my other articles linked below. 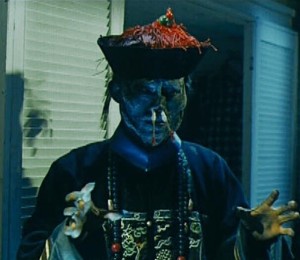