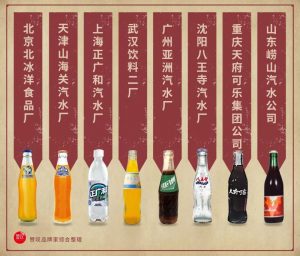 This year’s Qixi (Double Seven) festival was marked in a few interesting ways. Western brands like Gucci released ‘couple’ ads featuring LGBT partners, and Gong Jun, star of hit series Word of Honour appeared on Xuehua Beer cans. Though dressed in modern clothing, he is depicted wielding a paper fan, and surrounded by a colour scheme reminiscent of his character’s signature teal hanfu. He is just one of thousands of Chinese stars who lend their images to advertising, and there is a particular dynamism to Chinese drinks can and bottle art, which has flourished over the last decade, inspiring the art of other media and reaching far outside China.

It really started in 1981, a few years after China’s reopening to the world, when Coca Cola opened their first factory in Shenzhen and began selling their products locally. Their commercial methods were simple, offering a complimentary balloon and a pair of branded chopsticks for every bottle of Coke bought. This was revolutionary to a country that had operated on a planned model economy for decades, and eight domestic drinks brands rose to meet this new inspiration, and were founded the following year.

The Classic ‘State Eight’ were short lived, unable to keep up with the onslaught of foreign brands like Pepsi and Danone, as well as a new generation of Chinese commercial ones, but if you lived in China during the 1980s, you would have fond memories of at least one of them.

I remember occasionally being given some small notes and going down to the local bianlidian (small convenience stalls which sold everything from cigarettes and snacks to small toys) before a special meal, to pick up bottles of Guangzhou’s Asia orange and lemon soda for about 30 fen (cents) each. The root beer, was my favourite and usually reserved for treats on hot days out. In a traditional Chinese foodscape of low-fat, low-sugar and dairy free meals and snacks, in those pre-chocolate, pre-import days when the sweetest of treats were bean-filled crystal cakes and preserved plums, an affordable bottle of sugared, bubbly soft drink was considered a nice and decadent treat, and of course, you got 10 fen back for returning the empties.

During the 1990s, those glass bottles made way for cartons, tins and PET bottles, and by 1996, affordable bottled water was everywhere. The predisposition for bottled drinks in China stems from the fact that tap water isn’t drinkable without boiling it, and waiting for it to cool. Globalisation and the rise of the market economy, which accelerated from the 2000s onwards, gave China a taste for drinks like juices, carbonated pops, and chocolate milk, which were not inherent to its native culture. These developments also took elements of traditional culture and made them convenient, in the form of bottled tea; and catapulted the age old obsession with elixirs of health and longevity into the 21st century, with nutrient drinks. Today, if you visit the country’s convenience stores, or even overseas Chinese grocers, you’ll see a well stocked supply of successful domestic brands like Jianlibao, Wahaha, Lebaishi and Nongfu Shanquan.

All this product with large flat surface areas on the containers, provides ample opportunities for innovative design and, literal ‘pop’ art. 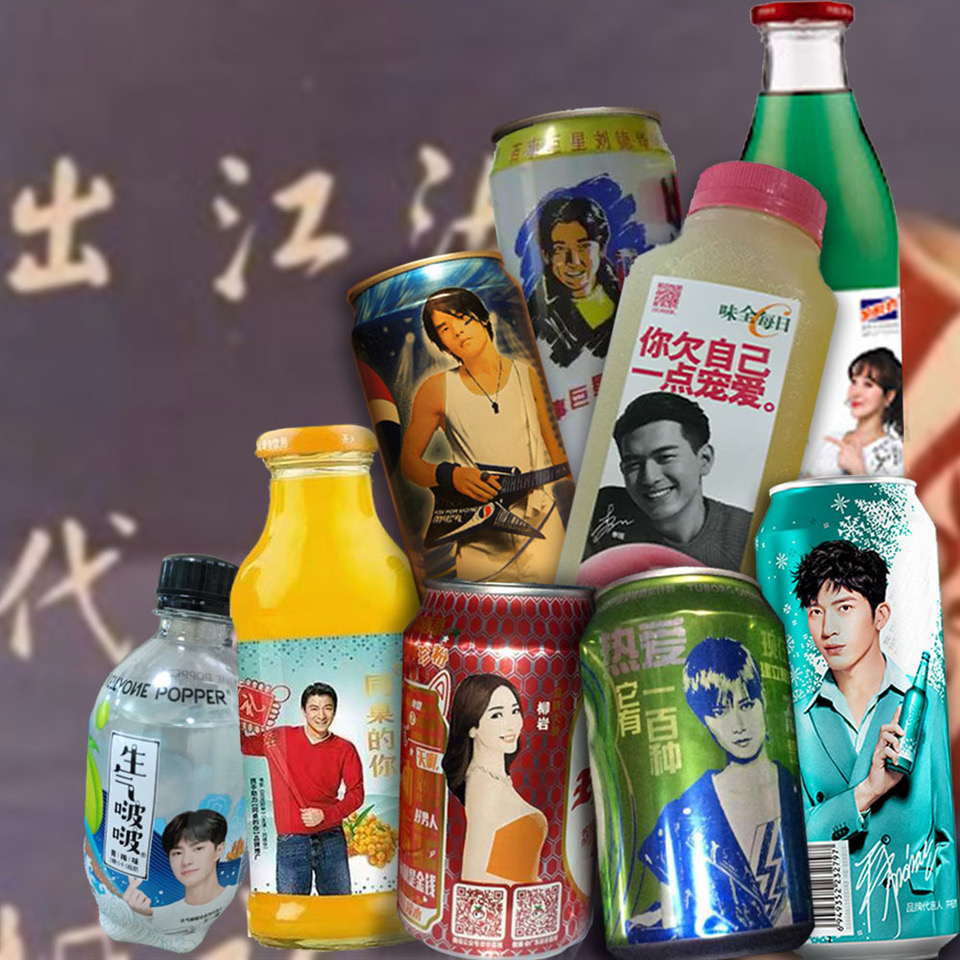 The gallery of faces beaming out at you from the shelves can be slightly disturbing. Whilst Western drinks companies may occasionally feature the stars of their adverts on-pack, Chinese culture places a lot of weight on recommendation, especially from figures of social or cultural authority. In a contemporary world where one is offered an unprecedented amount of choice, almost every decision, from hiring and firings, to even making a match, are often done on the good word of a trusted guide. It’s no wonder that in everyday life, favourite celebrities hold so much sway over people’s purchasing decisions.

Some of the earliest drinks art featuring celebrities’ faces came out in the early 2000s, when Pepsi, picking up on the popularity of the Taiwanese band F4, both for their music, and their appearance in the hit show Meteor Garden, began featuring them on cola cans, dressed all in cool, summery white, with their hair coiffured into perfect hanging spikes. Of course, putting only a single performer on a can, meant that fans either had to pick a favourite, or buy four times the amount of Pepsi. A few years later, the mainland followed suit, with the winners of Hunan TV’s “Super Girl” talent show, lending their faces to Mengniu’s yoghurt drink, featuring cute cartoon versions of the stars under their grinning photographic images. The name, photo and printed signature are key to enticing thousands of consumers, and sales rocketed.

Today, food and drink occupy nearly 20% of celebrity advertising (cbndata.com), with the hottest TV and pop stars, such a Wang Yibo, Xiao Zhan, Jin Chen and Yang Chaoyue, all posing for at least one major brand each season of the year. The reach of this Asian influencer culture has been well noted, and is now established enough to inspire derivative work. Recently, the comic book artist Annie Wu paid tribute to the trend in the variant cover of New Agents of Atlas (Issue 3), where the team’s Asian and Pacific Rim super heroes are reimagined as models for competing brands of drink, gazing out at us from a vending machine. 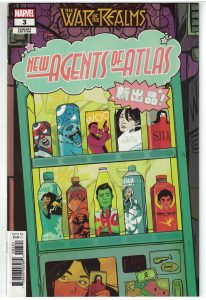 At the moment, upcoming stars desire to reach “wanghong” status (internet hot), but it seems the real measure of fame in China, is whether you are “pinghong”

Celebrity advertising is just one kind of drinks art, and just one sort of aspiration which advertisers utilise. Next time, I’ll be looking at the anime and video game stars who lend their faces to bottle art.