Beyond “Made in China” being stamped on almost every toy under the tree, you wouldn’t really consider the impact of Christmas as a festival in China, indeed my childhood was almost entirely Christmas-free.

Growing up in a major city in mainland China during through the 1980s, I would hardly have been aware of this important western tradition, if it weren’t for a mother who regularly jetted off to other countries. One winter, she brought back thick, creamy beige biscuits, which I ate without knowing they were Christmas shortbreads, and a heavy purple jumper featuring rows of snowmen in red hats and yellow scarves that I often wore out in the warm southern Chinese winters, without realising what a “Christmas jumper” was. This was as much of childhood memory of Christmas as I could muster. There was certainly no tree, no turkey, only the vaguest of feelings that things were happening in the place my mother had just left, and distant expectations of proper events, like Spring festival, still a couple of months away.

When I moved to the UK, I was formally introduced to Christmas by Charles Dickens. At boarding school, the first novel I read in English was “A Christmas Carol”. With its feasts and merriment and kindness, I was looking forward to my first English Christmas. Though I have to say, the institutional attempt at a Christmas roast, topped by a sliver of Christmas Cake, wrapped in rock hard icing, may have seemed more at home with the Cratchits than the Spirit of Christmas Present.

At home, I made an effort to celebrate an English Christmas, decorating a small artificial tree, and stringing the greeting cards from my father’s multiple work associates across the living room. Sometimes we were invited to Christmas lunches by the cards’ senders. Other years we celebrated Christmas Day with a large home-cooked meal, but of fish, pork, and other dishes cooked in the Chinese style. Not a sprout to be seen.

One part of Christmas, which did reach me though, was the music. I think probably the first time I can remember feeling “The Christmas Spirit”, was with the school choir, both at services and performing for charities, the mixture of carols, hymns, and Handel’s beautiful Messiah.

Now, with my English partner, we have experienced Christmas with his family, friends, and are discovering the tautology of new traditions. 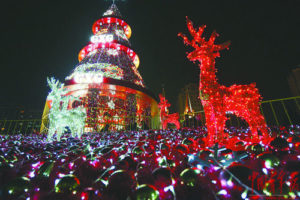 I don’t seem to be the only Chinese person embracing Christmas either. China is increasingly embracing Christmas as a time for celebration. Beyond the growing number of Chinese Christians, for whom Christmas is part of their devotion and faith, there are other reasons why the Western winter festival has become so popular. Media is one aspect, with American films depicting classic Christmas pastimes, such as trimming the tree, hanging up stockings, and stopping terrorists at the Nakatomi Plaza. 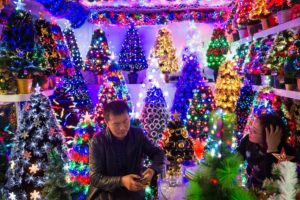 Globablization is another, with cities like Shenzhen and Yiwu, producing the bulk of the world’s Christmas decorations, the streets of China aren’t short of elaborate LED displays. In cities like Beijing and Shanghai, you’ll find a host of restaurants serving Christmas dinners, Christmas markets in big shopping malls, and multiple iterations of mulled wine. Although many of these events and outings are expensive luxuries, reserved mainly for Western expats, and a local middle class who want to be seen indulging in western activities, there are also plenty of lights, fake icicles and Santa hats available at general stores, as well as winter flower markets, where you can pick up trees and other seasonal decorations. 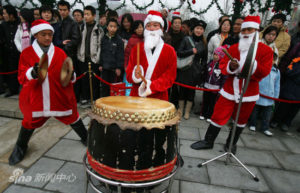 There aren’t a huge number of traditional Chinese festivals in winter and so Christmas slots nicely into a hole in the calendar, tiding one over from the recently invented Singles Day on 11.11, to Spring Festival. It also has the added benefit, in China at least, of being “New”. Whereas traditional Chinese festivals have their very established customs, for the majority of Chinese people, Christmas in China is a time when people can indulge in a little bit of a shopping spree or a bit of silly, daring fun, whether it’s a girls’ night out in fancy dress, or apparently, couples having their first night together, giving the Christmas stockings an entire new meaning. 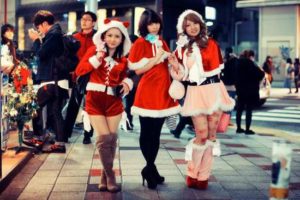 So, Chinese Christmas is a mishmash of misunderstandings, wholehearted embracing, seasonal excuses, and social flaunting. A character like Father Christmas, (a fat bearded man in a red gown) isn’t that far from China’s idea of a festive deity, and resorts like Gubei, the famous spa town near Beijing, are also opening to Christmas this year, with markets, parades, hilltop carols to supplement its more traditional attractions. The winter wonderland continues til the first of January, when you can attend the temple fair and begin to prepare for your next big banquet for Chinese New Year.

The only problem with celebrating both though, is having to be careful not to end up sporting Santa’s little round belly too! 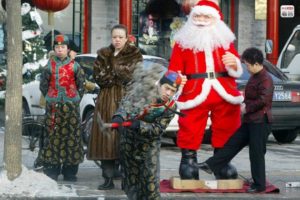