When I was living in China twenty years ago, the Chinese didn’t do Christmas. With our collection of household gods, national celebrations and local traditions, there really wasn’t room for another jolly old man in red.  Now, it’s a different matter, and “Sheng Dan Lao Ren” appears all through December, across China.

Looking back, my earliest memories of Christmas would have been those colourful jumpers of snowflakes and gingerbread houses brought back to me by my globe trotting mother, when I was eight. I had no idea that they were associated with a celebration, and whilst I loved wearing them, they just merged into the hodgepodge “anything goes” mood of Guangzhou at the time, and It was only later, going through family albums that I connected them with the holidays.

Whilst there’s no single religious saviour in the Chinese pantheon, the more pagan elements of Christmas have a resonance in Chinese festivals especially the new year, celebrating the birth of Spring. Instead of pine trees we bought home large kumquat or orange trees to be decorated. Rather than Turkey and Christmas pudding we filled our bellies with roast goose and Nian Gao. The spirit goodwill to our fellowmen, the exchange of gifts, and the normal world being put on hold,  is incredibly familiar. So when I arrived in the UK, aged 11, it wasn’t hard to join in the Christmas fun.

I’d grown aware of the concept of Christmas, at my first boarding school in the UK. Falling in love with classic English literature, and reading Dickens’ “A Christmas Carol”. In a sort of “when in Rome” fashion, my family bought a paper tree from John Lewis, hung up the lights, baubles on the tree and cards on a string, celebrating Christmas with a large meal, exchanging seasonal greetings, attending festive gatherings and visits from British friends. It was very much an attempt to fit in and climb socially I think, but to an 11 year old girl, in a brand new country, it was just a little magical.

Later, when, I began returning to China during school holidays, my Chinese relatives and friends began asking me about this thing called “Sheng Dan Jie” (literally “festival of saint’s birth”) on the other side of the world. Back in the UK, friends recently arrived would tell us of how elaborate the Christmas lights in Hong Kong and Singapore had been. Christmas was becoming a well-known concept in China.

As an adult I still went to work during the “chrimbo limbo”, not seeing the point of staying and home and doing nothing. I hadn’t really celebrated Christmas until I met my English partner, and began to join his family for their festivities every year. As a critique of culture, I am fascinated by customs and traditions from all over the world. To me, the maddening annual present buying rush is exciting, as is helping to prepare the Christmas dinner, mixing up the stuffing from family recipes, each generation adding notes or clarifications. I love decorating the Christmas tree whilst the cats try to settle on it. The lengthy, silly conversations held over the roast turkey, pudding and delicious strong cheese, and the walks in the woods on Boxing Day. 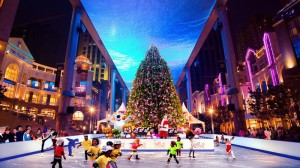 During the winter of 2008, whilst completing my post-graduate studies in Beijing, I loved just wandering around the huge city, popping into any place which caught my fancy. On a main road in the central east part of town, we found a shopping centre that locals went to by their stationery, clothes, make-up, toys ad practically any non-edible consumable. In the lobby, we found a Christmas tree, with a glittery Father Christmas, reindeers, covered in green, gold, red and silver tinsels. The gaudiness of Christmas brought up by a degree of magnitude that ony the Chinese in celebration could manage. 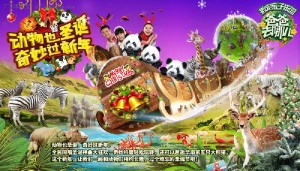 As the manufacturing powerhouse of the world, including Christmas goods, the festival has definitely rubbed off on China. Not only a nation of resourceful people making good use of export leftovers, they are experts in the art of public displays, public performances and a people who love an elaborate celebration.

In all major cities, hotels, restaurants and shopping centres compete on their Christmas lights and carol services. Children in the street bounce up to Father Christmas, dressed in China’s favourite colour, and in cold northern cities like Beijing and Harbin, children go ice skating under elaborate Christmas displays. Fashionable Shanghai offers midnight pillow fights, whilst Guangzhou with its mild winters flog their Christmas safari packages. In the globally inclusive culture market of China, Christmas is another chance to indulge in modern excess, celebrate in the height of winter, and convince themselves that they are part of one big westernized world.

As long as the message of goodwill to all men is at the centre of it, rather than the commercialism that seems to be steamrollering all the traditions I myself am only just coming to appreciate, there is absolutely no reason why China can’t embrace Christmas. I mean, if Father Christmas is distributing so much of China’s manufacturing for them, the least they can do is put some decorations up.