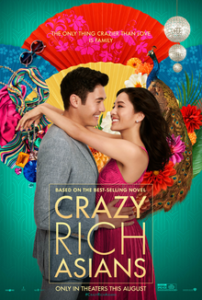 “Crazy Rich Asians”, has made a huge impact in the short time since its release, not only because it’s based on an international bestseller by an East-Asian author, Kevin Kwan, but because it features an almost entirely Asian cast, (with only five white guys even getting a speaking part). In a U.S.-originated movie, it’s a rare thing for East-Asians to take centre-stage.

With screenplay by Peter Chiarelli and Adele Lim, this is the story of quintessentially American Chinese Rachel Chu (Constance Wu), who embarks on a trip with her boyfriend Nick Young (Henry Golding) to visit his home, Singapore. It turns out to be the trip of a lifetime. Rachel discovers that her laid-back, low-profile boyfriend is a billionaire whose family built half of Singapore. Between head-on cultural clashes, and the brutal matrimonial realities within Asian family clans, Rachel is way out of her depth, and must sink or swim.

I am not usually drawn towards romcoms, preferring genre, art house, or classic films, so it’s safe to say that I am not seeing this work through the rose-tinted glasses, of an Ian Curtis fan. The film does indeed employ many typical tropes, such as the awful actress girlfriend, which can be traced all the way back to “Singing in the Rain”, not to mention the obvious Cinderella storyline with heavy John Hughes influences, all the way down to mistaking the finger bowl for a drink, and the spunky, alternative best friend dressing up as the chauffeur for the big party.

Asian stereotypes abound, from the tiger mother, to the see-lai “aunties”, to the playboy youngest son. Even Nick, the rich boy who wants to live like common people, is a recognizable archetype, as is Rachel, our poor but gutsy heroine. To give the film due credit, it is aware of its own stereotyping and even makes fun of it. When Rachel’s mother tells her that she is different from Chinese people in Asia, Rachel retorts: “I’m a lactose-intolerant Economics professor”. How much more Chinese can you get? While romcoms do tend to bounce off of the humour generated by stereotypes, the film does reach beyond this. As Constance Wu pointed out in her interview on Front Row, it is just as problematic to avoid stereotypical traits as to make characters one-dimensional. Some characters in this film do show another side beyond the moulds. Eleanor Young (Michelle Yeoh), Nick’s stern mother, ripples with emotional intelligence beneath all her stoicism, and Astrid (Gemma Chan), Nick’s cousin, turns out to be one of the most interesting characters in the story.

What really won me over was the cultural parodies and the witty script, starting with the montage that demonstrates how the remarkable Asian ability to gossip and network can be magnified hundred folds with the technology of smartphones, apps and social media. Throughout the film, we get a regular commentary on typical Asian social etiquette, customs and the East/West clash, in the form of parody. For instance, the colours that are considered lucky and unlucky, and push and pull of making an invite, and the oldest, nastiest, most effective trick in the book, Asian parental emotional blackmail. There are also some visual cues, which you really must be entrenched in Chinese symbolism to pick up on. When Astrid gives her husband a watch, anyone familiar with Chinese superstitions would tense up at this ill omen to their relationship.

The film stands out not only in its focus on Asian lives, but in its strong female cast. There is a marked lack of fathers in the foreground of this film. Nick’s father never shows his face, Rachel has never met her father, and Mr Goh, the father of Rachel’s best friend, Peik Lin (Awkwafina), is an unconventional and weak character, lending comic relief. Family matters, it seems, is where the woman reigns supreme.

Brian Tyler, better known for scoring action films like Iron Man and Fast and Furious, has collated a soundtrack that indicates excellent understanding of the story setting. Dotted with cover versions and the voices of bygone-era mandopop stars, mostly sung in Chinese and predominantly 1950s-themed, the music is exciting and upbeat to begin with, but eventually becomes oppressively positive as the film goes on. Despite the skyscrapers, fast jets and the 21st century fashion, Singapore belies a Chinese society frozen with1950s morés, encapsulated by Eleanor Young’s bible reading party at her house, surrounded by a group of her followers, the other housewives from the elite nobility, all as impeccably and expensively turned out as herself and her house.

“Crazy Rich Asians” makes an important point about being Chinese. Eleanor refers to Rachel as not of her kind, not Chinese but American, whilst completely aware that she herself, and generations of her family had left China for hundreds of years. They too, are distinctly different from the Chinese in China, whose social conventions and values are no longer so stratified as they are in Singapore. When you take a culture out of its country of origin, it doesn’t disappear. Very often, it stultifies.

One scene that really stood out to me, is the Mah Jong game towards the film’s end. Mah Jong scenes in Chinese movies are rarely just about the game. The expertly executed scene in “Crazy Rich Asians” is an excellent example. Both for the players and non-players of Mah Jong, it is a scene of gripping dramatic tension. It represents a battle of wits and symbolism, which only deepens with discussion.

Not only does the film feature linguistic diversity, but also a wide range of Chinese diaspora in the cast who are telling their stories. Beijing actress Lu Ye Chun, one of the first Chinese actresses to star in Hollywood films, plays the revered family matriarch. At 91, she has lost none of her poise, or her beautiful RP Mandarin. She holds up well against the wonderful Michelle Yeoh, who we have seen play a myriad of stoic, commanding roles, but here, adds under notes of still seeking approval, despite her privileged position.

The wider social commentary of “Crazy Rich Asians” is also interesting. The reversal of the common American chiding at an unruly child refusing to eat, shows how far Asia has come from being an object of pity. Could the 1940s generation have ever imagined that Asian children who refused to eat would be told to think of poor children starving in America?

There are other issues, not quite as easily laughed at, which are dealt with in still comedic fashion. Oliver T’sien, the camp “rainbow sheep of the family” states that he earns his place at the “court” of the family, in procuring things to indulge its excesses, and Peik Lin is chided as returning from America as “the Asian Ellen”. These two lines are short, and easily cropped for certain markets, but do remind us that not all is fair in the state of Singapore.

Whether you simply enjoy it as a romcom, or watch it as a cinematic work that gives proper voice to East-Asians creators and cultures, “Crazy Rich Asians” has my recommendation, and I hope the success of both the film and the original book will lead to more exploration in mainstream Western media for East-Asians.