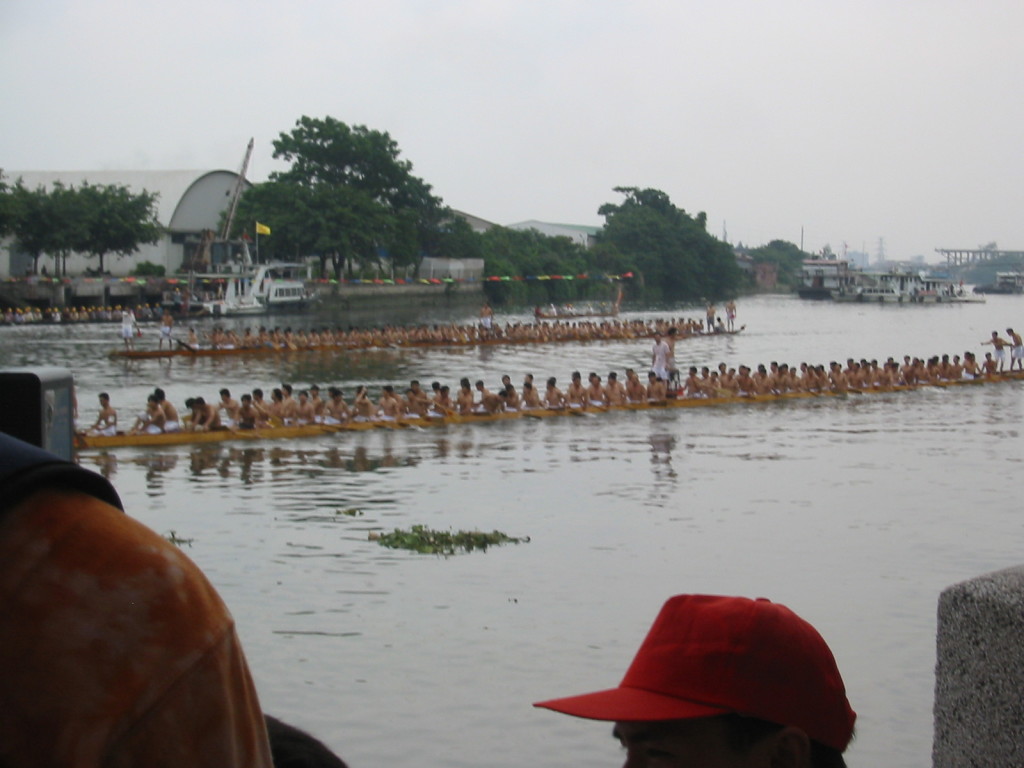 Summer is here again, with Dragon Boat Festival to mark it. This year, instead of delivering my culture tweets, I’ve put together an article, so that people interested to look further can read more about it. After all,  Dragon Boat Festival is China’s major traditional summer festival, and probably the second most well-known celebratory event after Spring Festival.

The traditional name for Dragon Boat Festival is 端午节 (“Duan Wu Jie”), so called because it takes place on the 5th day of the Lunar Calendar. Being a very old festival there are many versions of its origins. The one most associated with it is commemoration of the patriotic poet Qu Yuan, who lived during the 4th and 3rd century BC. Legend has it that Qu threw himself into the river and drowned on this day, and the people of Hunan raced in their boats to try to save him.  They wrapped up rice in calamus leaves and threw them into the river, so that fish would not feed on the poet.

There is probably not a single student in China who doesn’t know about Qu Yuan. I not only had the pleasure of learning about him in primary school, but also to study his poetry in greater depth when I returned to China for post-graduate literary studies. Creator of the literary form of the Chu Song, Qu Yuan’s most famous work is “Li Sao” (The Lament), a romantic lyrical poem with political themes. His other works include “Huai Sha” (Embracing the Sand), “Jiu Ge” (Nine Songs) and “Tian Wen” (Asking Questions of Heaven), in which 172 questions concern subjects as wide as astronomy, geography, literature, and philosophy.

The activity for which the festival is mainly known in the West, dragon boat racing, evolved out of the legend of Qu Yuan’s death, and gradually, with Taoist influences, Duan Wu also became into a time for preventing diseases, pests and warding off evil.  Here are some Duan Wu rituals and customs, lightened up by my own experiences.

Ai of the Tiger!

The ancient Chinese believed that tigers can devour ghosts and evil spirits. On Duan Wu, people would make tiny tigers out of mugwort (艾草 “Ai Cao”), a popular medicinal herb. Men wear it behind their ears, women in their hair and children have it pinned on their backs. The custom of wearing mugwort ornaments on Duan Wu continues even today in some regions.

Another popular medicinal herb is calamus, used to make shoes and fans, branches of calamus and mugwort are hung during Duan Wu, in palaces and pauper’s huts alike.

Calamus fans are an inseparable part of my memories of summers in Guangzhou, I can still recall their distinct smell, peach like round shapes and woven textures. Back in the days when air conditioning and electric fans were not as affordable as they are today, every household had at least a couple of these fans. People sitting on low stools just outside their front door in the evening, chatting and cooling themselves with these fans is a typical part of the Guangzhou street scene.

The ancients believe that Duan Wu is a time when evil energy is rife. Pictures of Taoist gods, talismans and charms made of mugwort were worn to ward off evil. These charms would often feature poisonous insects such as centipedes, scorpions, snakes and toads. Such patterns were often woven into children’s clothes and women’s hair ornaments.

Five colour threads, or longevity threads woven with silk, derived from the five poison charms, these were worn around the neck or on the wrist, or tied into “hundred year knots” to be put on children, wishing them long and healthy lives ahead.

You can see how 粽子 evolved from the legend of Qu Yuan’s death. These are parcels of glutinous rice with both savoury and sweet fillings, wrapped in leaves and steamed. Common savoury fillings are pork, chicken, mushrooms and mung beans, common sweet fillings are red bean paste and eight treasures (see my article on La Ba).

Zongzi are a very common part of growing up in southern China. They could be bought from any breakfast stall or street eatery, where the stall minder would gingerly extract your order out of giant bamboo steamer basket piled on top of each other with wooden clips, and pop them into a small white plastic carrier bag. The Zongzi of my childhood were larger and mainly savoury, more for sharing, the filling was larger and of cured meats and fragrant mushrooms. I could taste the flavour of the leaves from the sticky rice. Zongzi can be eaten hot or cold. You should be able to buy Zongzi from most Chinese shops and restaurants in the UK during Dragon Boat Festival. Interestingly, the term“Zongzi” has also been adopted by grave robbers to refer to undead corpses, or zombies, see my translated sample of Ghost Blows Out the Lamp.

It is also customary on Duan Wu to go out and “gather a hundred herbs”, come home, make herbal infusions and bathe oneself in a bath of herbs.

As a child, Duan Wu was not a time for un unusual amount of herb intake. My Cantonese grandmother would brew herbs in her clay pot, and make me drink the bitter brew every week. Nowadays, one doesn’t need to go into the mountains to gather a hundred herbs, just pop down to the nearest TCM hospital or herbal infusion stand dotted all around the city.

Many customs and rituals are as much rooted in belief as in their practical purposes, Duan Wu is no exception. As summer arrives, pests and bacteria become more active and diseases rifer, what could be better than having antiseptic herbs about you or taking a herbal bath as preventative measures, and of course exercising and keeping fit. That’s where dragon boats come in.

Dragon boats are long thin rowing boats the head and tail of which are carved and painted to resemble oriental dragons. They can usually seat two rowers side by side. At the head (and sometimes middle as well) of the boat is the cheerleader with the a drum, responsible for keeping team morale with verbal and percussive encouragement.

One of my best experiences of dragon boats occurred during the first time I took my English partner to China. We were invited to the festivities by the cousin of a family friend, in a village near the city of Guangzhou. Having been a city girl all my life, I had never seen how elaborately rural people celebrate Duan Wu. The whole village had come out to the river banks, where tables and chairs were laid out in the open. Due to the quantity of mouths to feed, the 8 dishes, all delicious, were ladled out of metal basins in a gazebo onto plates and then brought to our table. My partner, the honoured Western guest, was toasted by everyone with rice spirit served in porcelain bowls. It would have been rude to refuse to drink with anyone, so I was surprised he could still stand up, let alone move over to the seats under the bamboo scaffolds to watch the race. The dragon boats were about three times as long as boats I’ve seen anywhere else. As the race began, our host, who had bet on the winner, fervently shouted down the phone over a chorus of raucous cheering. Today I can watch the races on the Pearl River from the balcony of my parents’ flat, but it will never be the same.

In the twentieth century, the British have combined their love of rowing with this great tradition of the Chinese settlers, and the British Dragon Boat Association have formed clubs all around the country. Whether you live near the Thames or the Nene you can join or form your very own dragon boat team, train around the year and kick start the summer with that exciting annual race. It has become somewhat of a tradition in my household to attend the races at the London Regatta Centre opposite Stansted Airport, and watch the boats set off as planes soar above us.  We tend to cheer for our favourite teams, Team Pokemon and the Windy Pandas. Yes, Britain has its very own dragon boats, which, interestingly, sometimes get used for Viking events! There is even a scouts badge for dragon boat racing.

Find out more from: http://www.thamesdragons.com

I hope I have provided you with interesting reading and encouraged you to celebrate Dragon Boat Festival in the UK. Enjoy your herbal infusion, Zongzi, keep fit, and I hope to see you at the London dragon boat races at the end of the month!