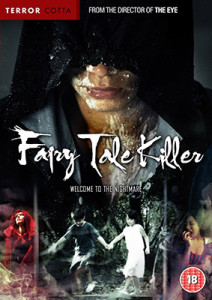 Inspector Wong (Lau) arrests a seemingly disturbed man in thick white face paint (Wang), who has confessed to a brutal murder, a murder whose victim is still alive and wandering round unaware of any possible crime against him. The makeup smeared ‘perpetrator’ is dismissed as a crank and set free, but when later, a body is found with its stomach cut open and stuffed with rocks, Wong realises he has let a dangerous killer go free. Wong’s already rocky career, and that of his team, now depends on tracking down the murderer, and his hunt for the killer leads him to further neglect, his home life, made even more unbearable for him by the presence of his autistic son. As more victims are discovered, Wong and his team begin to find clues and similarities linking the murders to children’s fables, and a pair of homeless orphans.

The film certainly delivers the gamut of gruesome, fairy tale inspired murders its name promises. They reference Cinderella, Hansel & Gretel and even the lesser-known stories such as The Red Shoes and The Wolf and the Seven Lambs.  The cat-and-mouse finale combines elements of Rapunzel, Sleeping Beauty and Snow White, whilst the story of the Frog Prince runs through the entire series of events. Whilst the deaths themselves are gruesome, ranging from being baked alive to bleeding out through mutilated feet, the directors’ extremely discrete and tactful approach successfully stops the film from turning into schlocky torture porn. Shots of the victims are partial, quick and leaves much to the audience’ imagination, fueled by the reactions of the investigators. The camerawork features close and uncomfortable fields, twisted angles, and shadowy obfuscation, all designed to provoke feelings of immense tension and unease.

The soundtrack is exceptional for the genre. Sounding like the product of Bernard Hermann jamming with Nice Inch Nails, it drags expectations through drab offices, grim mental institutes and derelict dens, before  being counterbalanced by faux Wendy Carlos electro anthems, underlying the occasional heroic deed.

As with Srimantra’s previous hit, Chocolate, themes of autism and the treatment of the mentally ill are brought to the foreground. Both Wong’s son and the prodigious painter at the heart of Fairytale Killer, are shown as autisim sufferers, isolated by those around them. The exaggerated pantomime emotions they express are much more intense than ‘normally’ functioning characters, making them the centre of attention in every scene that features them, and in one particular case, where Wong’s son wanders off, their absence.

The similarities between the witch-like Yue-Yee, whose intensely scrawled images seem to be the key to the killings, and Wong’s son, who is as avid a wall-scrawling artist, are drawn regularly, sometimes to the benefit of the case, but mainly to the frustration on our investigator. Already wracked with guilt, Wong becomes aggressive, distant, even sacrificing his own team to internal affairs when problems arise.

Wang Bao Qiang’s performance as the killer, Wu Zai Jun, is wonderfully quirky. Whilst we are told he is not actually mentally ill, he is disfigured and disturbed by a lifetime of institutionalization and abuse. He ranges from a near mewling creature, stammering and slurring his speech, before suddenly switching to deadpan delivered Putonghua, during his few moments of lucidity.

Set in Hong Kong, with most characters speaking Cantonese, Wu’s Mandarin adds a level of otherness and exile to his character. The mixture of badly smeared white make-up, purple clothing, and gleeful cackle as his plans unfurl are such an overt nod to Heath Ledger’s portrayal of the Joker. The western influences extend further, with David Fincher’s Se7en acting as a blue print for the entire movie. Tropes such as creepy notebooks and contraption strewn hideaways, sit side by side with common plot devices, such as stolen finger prints, and even the death of a pre-warned lawyer. Even Wu’s eventual capture, is at his own behest, and part of his greater plan.

It would have been all to easy for the director to build Fairytale Killer to Fincher’s exact model, or even to ape more recent psycho killer successes such as the Saw Septet, but Pang does something very clever with the cloth he’s working with, and after side-story, flashback and exposition have muddied the lines between who exactly is a force for justice, The film steps away from its horror based roots, and becomes a story of heroism and redemption, in a manner that seems conservative by western film standards, but ultimately satisfying.

Fairytale Killer is available on Terracotta, from October 7th. Put it on your Halloween watch list.