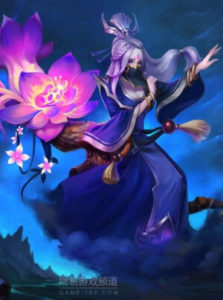 Deification of the elements is the fundamental way in which early civilizations express their spirituality. The third female deity in my mini-series is one of the oldest in China, the earth deity. The oldest form of this deity is called She, and refers to the worship of earth and stone vessels representing this element. Later came the veneration of mountains and forests, plains, hills, cemeteries and graveyards, lowlands and marshes. Hou Tu, meaning Sovereign Emperor Earth, has always been a powerful deity whose wrath people feared. In mythology, Hou Tu is one of the twelve ancestral wizards, along with the wind god Tian Mu and the water god Xuan Mo.

Hou Tu may have once been male, the son of Gong Gong, the water god. This version of him is still present in pop culture today, for instance, as the leader of the Other World in the animation Big Fish and Begonia, which I helped to introduce to UK audiences in 2018. But predominantly, the gender of Hou Tu has transitioned to female. This could be linked to the veneration of Di Mu, or Mother Earth, a natural concept for many cultures; and the materialization of the concept of Yin and Yang. The sky is classified as Yang and male, the earth, Yin and female. Hou Tu isn’t as popular as her male counterpart, the less powerful local earth god Tu Di Ye, Grandpa Earth. But to this day, she enjoys steady veneration in China’s more inland regions, where lives are more closely bound to the earth than cities. Today, she has a smashing presence in computer games, where some designers have traded her matronly appearance for kickass warrior witch.

Next I’ll write about the patron goddess of one of China’s oldest trades.