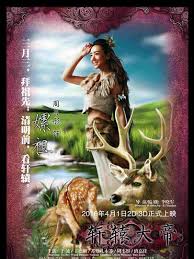 For my fourth mini article, I’m writing about one of the oldest Chinese trades, silk. The silk trade was instrumental to the ancient economy and of course, needed a major guardian deity. Like the silkworm, the mythical origin of its patron is one of metamorphosis. Ma Tou Niang, the horse-headed lady, is the story of a merchant’s daughter getting rather too friendly with a horse. She ends up abducted by the equine ghost and hanging from a tree in a cocoon. During the Han Dynasty, the empress herself made offerings to Ma Tou Niang. However, the goddess of silk is far more commonly known as Lei Zu, widely accepted to be Xiling Shi, wife of the Yellow Emperor.  Most research indicate that Lei Zu was an exceptionally intelligent and resourceful woman who taught herself the techniques of sericulture, and then her people.

Fashion may change, but silk has endured. It’s been sought after by the West since at least the Medieval Ages. Veneration for Lei Zu is still very much alive in contemporary China. Patrons of her worship include many businesses. With state involvement, Lei Zu has become a major symbol of indigenous commerce and industry.  To venerate such as an important goddess you won’t be short of festivities and sites, from the Lei Zu memorial hall, cultural park and festival in Hu Bei, to the her ancestral caves in neighbouring Sichuan. The traditional image of Lei Zu, a dignified woman in hanfu tending to her craft, is still popular today, though recent appearances have gravitated towards prehistoric tribal wear.

For the last article, I’ll be talking about a goddess that’s relatively less known in the West.