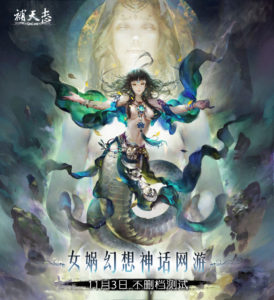 The second figure I’m writing about in this series is a goddess who plays an essential part in China’s creational mythos. Whilst Pan Gu created the world, Nü Wa saved it. She also created mankind. A long time ago, a mythical being, with the upper body of a woman, the horns of an ox, and the lower body of a serpent, wandered the earth. She found it beautiful and wanted the company of beings like herself to share it with. She fashioned creatures out of mud and gave them life. They delighted her. But a fight broke out between the water god and fire god that tore the heavens, and Nü Wa resolved to rescue her creations from the destruction this caused. She built dams, repaired the hole in the sky and placed pillars under the sky to give it extra support.

The earliest renditions of the Nü Wa myth present her as a mystical ruler of the Chinese people.  Whilst Pan Gu was strong and self-sacrificing, Nü Wa is brave, intelligent and kind. She may be full of love for mankind but she is not a deity to be trifled with. In children’s tales, her entirely human depiction brings her closer to her motherly image. In our contemporary endeavour for authenticity, her serpent’s tail is often shown in its full glory. In certain regions, free entry is granted to women at sites dedicated to Nü Wa on certain significant days. As the Chinese take more pride in preserving their heritage, many cultural ventures have chosen to harness her name, whilst contemporary literature are reinventing the goddess for the 21stcentury.

Next I’ll be talking about Hou Tu, one of China’s oldest deities.