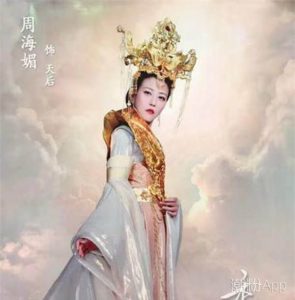 If we talk about Chinese goddesses in the West, the one that people will think of is Guan Yin. In the last of my mini series, I’m going to bring your attention to another protector deity of major cultural significance.

The Chinese, inventor of the compass, were once great explorers. Even before Admiral Zheng He’s
famous sea journeys, and coastal regions were trading by water. The sea, with its unpredictability, was both a blessing and a bane. A powerful goddess rose out of the coastal towns to offer seamen a sense of protection. She is Tian Hou, goddess of the sea. According to legend she was once a real woman by the name of Lin Mo who lived in Fujian. As a young child, Lin was already a great swimmer and had an intuitive bond with the sea. One night, Lin Mo’s mother found her tossing and turning in her sleep. When she was woken up, she said there had been a storm at sea. The next day her father and brothers returned home, with accounts of their hazardous journeys, and a woman walking on the waves, hauling their boats to safety. Even during her lifetime, Lin Mo had became a legend. Lin Mo died young, at sea, during a rescuing effort.

Legends of goddess’ apparition grew more fantastical. The goddess of the sea began life as a local protector and gradually earned the veneration of emperors. She did it all without any mythical origins. As China made great advancement in seafaring in the Yuan period, belief in Tian Hou’s efficacy spread along the Fujian coast to other regions. Migrants who moved from Fujian to Taiwan, took their love of Tian Hou with them. There she is known there as Ma Zu. Her legends are even intertwined with the origin of Hong Kong and the naming of Macao.  Tian Hou appears traditionally like a celestial queen. She has even captured the imagination of Western writers. With China having become the manufacturing powerhouse of the world, veneration of Tian Hou has remained strong today.

I hope I’ve whetted your appetite for Chinese goddesses. You can read more about the five I’ve talked about in my book, and many more, such as Shan Dian Niang Niang, Mother Lightening, and Chuang Jiao Po, Goddess of Beds. Read about Meng Po, the goddess of the underworld for a brew of dark tales; He Xian Gu, one of the Eight Immortals, is a rather eccentric healer. Some have tended towards the bizarre, like Zi Gu, namely Goddess of the Toilets, but actually a protector of women’s welfare. The Chinese pantheon is not only filled with heroic and illustrious characters, but the rebellious, rambunctious and the misfits too. And I hope to be your guide on this most excellent adventure.