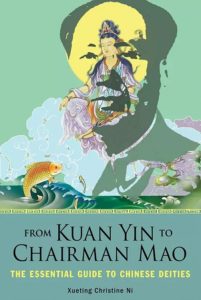 Even though China’s pantheon is mammoth, there does tend to be more male deities than female, it’s an imbalance I’ve tried to redress in my book. For Chinese goddesses are fabulous indeed, they come in many types – deities of the elements, the trades, protectors, creators. Most of the Nü Shen, Chinese for female deity, are very powerful. They also have amazing stories, and are some of China’s oldest supernatural beings. In this mini-series I write about 5 of them.

Prehistoric Chinese societies were matriarchal. One of the most powerful Nüshen is Xi Wang Mu, Great Mother of the West. She may have been the leader of a tribe in the western regions. Early mythology describes Xi Wang Mu as half human and half tiger. She was the goddess of calamity and punishments. Her image underwent a dramatic change during the Warring States. King Zhou Mu Wang, depicts her as a graceful, sophisticated lady who greeted him in mystical Kun Lun, as the daughter of Jade Emperor. During the following era, tales of the strange immortalized this image of the refined queen. By the Han Dynasty, Xi Wang Mu was appearing in literature with full immortal powers. 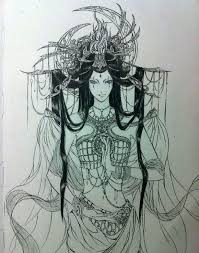 As this deity ascended to the skies, she left her earthly roles behind along with her feral image, and took on that of the granter of happiness, longevity and sons. Xi Wang Mu’s endorsement by the elite prompted Daoism to rank her at the top of the pantheon. She was now wedded to the Jade Emperor, and bore him seven daughters, spawning one of the most famous love stories in Chinese mythology. Xi Wang Mu is known for the celestial peach that grant immortality, and her heavenly banquet, which the Monkey King famously gatecrashes in “Journey to the West”. Today she is still a major goddess of the East, with culture conventions taking place at her temples, and even international tours. In pop culture, there is a dichotomy to Xi Wang Mu’s representation – regal queen in versus ferocious cat lady. She’s appeared in Hollywood movies and popular fiction as a zombie queen.

Next I talk about one of the well-known Chinese goddesses, Nü Wa.