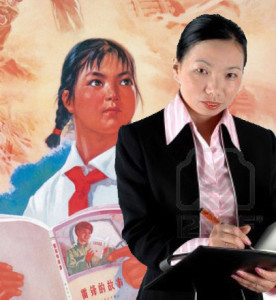 In the last week or so, China’s new generation of leaders was announced, in a statement that only really happens every 10 years or so. The fact that all the figures who walked onto the dais at the Great Hall of the People were men wasn’t really a surprise, but it was a disappointment.

Whilst imperial China was very much a patriarchal, chauvinist society,  the 1950s and 60s brought forth “Tie Gu Niang”（铁姑娘），or the iron maidens. Neither the torture device, nor the east London metallers, but strong, robust young women who frequented the battlefield, ploughed the fields and shoveled coal into the steelmaking furnaces. These androgynous, almost masculine women are often found on propaganda posters. Cradling farm tools, or machine guns, gazing off into the glorious new dawn. The public face of these industrial heroines also stretched to Cinema, and Tie Gu Niang graced the screens of two classics of this period, Five Golden Flowers (1959) and The Red Detachment of Women (1961).

In a relatively rare romance from this period, Five Golden Flowers tells the story of village youth, Ah Peng, who falls in love at the March Festival with a girl who dismisses his vows of undying love, instead giving him her name and the place to meet the following year. What follows is a comedy of errors featuring four other girls of the same name, a man only known as “the old meddler” and two bumbling artists of Chang Chun Film Studios from the city (who are of course in the ultimate act of nepotism, also the maker of this) who brave the mountains in search of fresh material. The real stars of the movie the five gutsy and charming Jinhua (“golden flowers”), four of whom lead various divisions of the commune, whilst the final flower (our hapless hero’s true love) is the deputy director. There’s Jinhua, who manages an entire animal farm and gets fed up with her admirer getting in the way of her job, and Jinhua at the iron foundry, whose talent brings her a higher position than her husband.

In contrast, and far more familiar fare of the period, The Red Detachment of Women tells the harrowing tale of Qiong Hua, a spirited slave of the warlord who killed her family. Aided by undercover Communist agent Hong Chang Qing, she escapes and meets a companion of similar fate. Together, they join the first troop of women soldiers in the country. With guerilla tactics, the small detachment manages to hold off an entire army of warlord retainers and KMD soldiers. Their rousing marching song identifies them as modern day Mulans.

Although set in 1931, Qiong Hua’s fate moved me to tears, tears for my own strong, independent maternal role model, and for her mother too, also once a gutsy teenage girl on the verge of being sold to strangers. She snuck into their house, took one look at her younger, crippled future husband, and ran away to join the People’s Liberation Army, where she fell in love with my grandfather.

With this history of strong emancipation, it would only be the natural course for Chinese women to occupy much of the ruling bodies of the People’s Republic. Sadly, this is very far from the reality. Women today only make up about 20% of both the NPC and the Communist Party, even the high profile first lady has had to fade into relative obscurity, and First State Councilor Liu Yandong is the only female in the politburo. Add to this the negativity with which people describe  “Sheng Nu”(剩女) ，“left-over women”. “Sheng” is the same character as would be used for leftover food. These smart, independent women have only committed the “crime” of passing the age of 28 without getting married. What happened?

The well meaning PLA put women on their liberating list in the 1930s and 40s. Championing the cause of women was synonymous with the struggle against the cruelty and injustice of imperial and feudal China. This was a metaphor easily forgotten after the formation of the People’s Republic, and China did not have its Millicent Fawcett or Emmeline Pankhurst to keep digging in the ribs of the lawmakers. Whilst reforms meant that women could be factory workers and engineers, i.e. do the same type of work as men, were those men, who brought about these changes, happy to be superseded by women? Did they want to look after the children? Did they want to do the house chores?

Clues can be found even in the early films I just discussed.  In Five Golden Flowers, Jinhua’s role in the commune was one of “Deputy” Director. If the point of heroine Jinhua’s position is to show that she is capable and strong, why not just make her the commune’s overall leader? The director himself never appears in the film, but I don’t think there is any doubt he’s a man.

In The Red Detachment of Women, whilst we expect to see the development of Qiong Hua’s life, the glorified hero treatment is given to Hong, who saves her, becomes her mentor and dies a martyr. Why is the brave female commander not the inspiration? The answer is sadly, that it was inconceivable for Chinese society to consider the female of the species to have wisdom and power, without it being handed down to them by a man, and to a large extent, this still prevails. Whilst he loved my grandmother and succumbed to her dictates, my grandfather never set foot in the kitchen. He wanted to swap one of my aunts for the son he never had, and would have done so if my grandma hadn’t put her foot down.

In the 20th century, women were given the political, geographical freedom and social acceptance to be well educated and to do all kinds of work, but culturally, many men in China still expect women to assume traditional female roles with all the duties attached alongside their fully-fledged careers.  I know that some women would prefer to stay at home, manage the household, look after children and true feminism should give them that choice. In many cases, the women of China have to take both routes together. There is clearly a social stigma attached to remaining single, and most parents of this single child generation expect grandchildren. Where would most women find the time to become powerful leaders?

Even in China, not all men are pigs, though open-mindedness seems to vary by degrees. I have met a few Ah Pengs and Hong Chang Qings. 40% of governmental officials are women and on average every Chinese city has one female mayor or vice-mayor. Ex-Vice-Premier Wu Yi and the State Councilor Liu Yandong gives us hope.

Whilst there are fewer women the higher up the chain, their numbers are swelling at the base, and the pool of female talent to choose from is growing. We should never underestimate the importance of cultural change. Culture is created by the people, so change has to come from individuals. As long as the concept is slowly sinking in that women are culturally equal to men, and that there is no shame in doing the lion’s share of what is traditionally considered to be women’s work and roles, then there is far greater hope for a fair representation of women in the top echelons of political power.