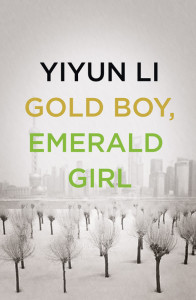 Golden Boy, Emerald Girl is the second collection of stories from acclaimed author Yiyun Li. Each separate story has previously been printed in different American and British newspapers. It makes perfect sense for the nine stories, all slices to urban oddities in modern China, to be collected in a single volume. With subject matters such as internet, social media, divorce, child adoption, child abduction and homosexuality, there is no mistaking their 21st century backdrop.

Like all avid readers, I do make a judgement on the first page of a book, and I have to admit, I was not instantly hooked. ‘Is this yet another book…’, I asked, dragging myself through the first story, ‘…about Chinese people with their head stuck in the past, unable to move on from the horrors of the wars and revolutions?’  It certainly seemed so, but despite the clichéd setting, the story evolved in directions so unexpected,  I was forced to reconsider the entire story from a fresh perspective. Even though binging on short stories can be quite disorientating, requiring readers to pull their imagination out of one world and immerse themselves in another repeatedly, I found myself moving immediately from one to the next, my mind ensconced in the new setting, ready to take the journey alongside the characters, by about the third and fourth paragraph.

The language, in places, is clunky.  A character named “Teacher Fei”, would have preferably been referred to as Mr Fei, or just remained as Fei laoshi. The poigniancy in a phrase used in Number Three, Garden Road , “the dead is gone, the live lives on”, just prickled my sensibilities. Surely “the dead” are plural, and “the rest live on” would have flowed better. The awkward grasp of the language does not detract from the author’s brilliance in storytelling, and her unique insight, which were enough to carry me along, and at quite a pace.  Li is neither didactic nor overly emotive, writing in a wonderfully understated yet very affecting style. At the end of A Man Like Him, a story of camaraderie between two men wrongly accused of sexual transgression in different eras, Fei’s thoughts, a mixture of sorrowful despair and tenacious defiance, is beautifully expressed:

“But for the other man, who would be watching the night fall around the orange halo of the streetlamps with neither longing nor dread, what did the future offer but the comfort of knowing that he would, when it was time for his daughter to carry out her plan of revenge, cooperate with a gentle willingness?”

A lot of the stories are about perspective. The author likes to set you comfortably on one course and then, in the last few paragraphs, spin you to a completely different one, driving her points home with great lucidity. Much of the tension and psychological horror of Prison is derived from this sting in the tail. I love Li’s ability to represents a cross-section of society. We are dropped into the lives of such varied characters, left to consider an episode presented to us, before we are then quietly led away, as their private stories continue. Sometimes Li leaves an arc, at a point the reader can comfortably consider an inevitable conclusion, other times she teases us, cutting us off  in the middle of a crucial moment, forcing the reader to consider all possible outcomes. House Fire ends just as a case begins to break up the long cherished friendship of six women and their renowned private detective enterprise.

Like most stories from China, Li’s collection is inextricably linked to the past, but here, we also very much see a concern with aspects of contemporary urban life. The internet and social media have enabled justice where previously impossible, and netizens to reach out to strangers when they want to help, like Fei, in A Man Like Man. Works such as this and Chen Kaige’s Caught in the Web, are starting to look at the flip side of this revolution in communication. Though the Cultural Revolution is behind us, the ugly side of human nature, conditioned by that event, remains, and finds an outlet in the anonymity and the intense public exposure of the world wide web. The Social stigma attached to the children of criminals in China is dealt with in The Proprietress, about an eccentric old lady who runs a shop in a prison, which develops into a wider question on nature and nurture.

There is a penchant for melencholia in most modern Chinese fiction, especially those stories that make it to the West, and this collection certainly has its share. The story House Fire introduces a rare glimpse of humour, in a story about Chinese attitudes to sex, adultery, and the modern role of women. Dealing with a group of female private detectives (a profession becoming something of a notable phenomenon in Chinese society), we look at women taking on roles as lovers, wives, victims, and even mimicking mothers, threatening at one point to spank a client like a naughty child for malicious gossiping

As a book producer, I’m afraid there will always be a paragraph or so in my reviews devoted to “the book as a physical product”. This copy, a hardback ex libris from Kent, was published in the UK, but as part of a US co-edition. I can understand the cost-effectiveness of printing one version for both markets, but one can only read “pants” instead of trousers and “elementary school” instead of primary school so many times, before wishing there had been enough left in the budget for a separate UK text. It’s not just a question of habit, but heritage. The cover, a picture of a barren shore with leafless trees and the distant skyscrapers of the Shanghai metropolis across the river, intrigued me, like a good cover should. The inside text is nicely typeset in a classic serif font, a tad too small for me, but the lovely calligraphy style title and header font gives out a hint of orientalism on every page.

If you’re interested in contemporary Chinese society, as well as ancient Chinese culture, I would definitely recommend this collection of stories. It has really sparked a love for this author , and I’m really looking forward to tracking down Yiyun Li’s other titles, The Vagrants and A Thousand Years of Good Prayers.