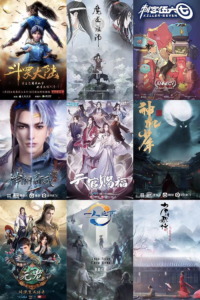 As a child living in China during the 1980s, I grew up with its animation classics from the ‘60s and ‘70s, that were often repeated on TV.  But when it came to the new works, I stuck with anime and Western cartoons, such as She-Ra, TMNT, and Transformers. It wasn’t until after I’d emigrated to Europe, and returned to study in Beijing in the late 2000s, that I began to be impressed by new Chinese output.

When you think about Animation, China may not be the first place you think of. You might picture the charming works of Disney, or the ultra-violence of Japanese anime, or perhaps the slapsticks of Looney Tunes. But the history of 动画 Donghua (Chinese for animation) is long and full of beautiful works that are not as appreciated in the West as they could, or should be.

The story of Donghua does indeed begin in a tiny studio in 1920s Shanghai, when three art students who taught themselves filmmaking techniques from Disney movies, made their very first animation. The Wan Brothers then went on to make Asia’s first monochrome animation feature, Princess Iron Fan (1941). Although Monkey King in the animation bears a resemblance to Mickey Mouse, the film retains a uniqueness in motion and art style, based on traditional aesthetics.

Cinema technology evolved, as did filmmaking, and as China became the People’s Republic, and talent was brought in to large, state run organisations, the iconic Shanghai Animation Studios was formed, and a Golden age of Donghua, was born.

The ‘50s and 60s saw innovation in animation techniques based on traditional and folk art, such as wood puppetry, paper cutting and ink wash animation. Jin Xi’s 1955 adaptation The Magic Paintbrush, still finds echoes in global children’s literature today. Based on Hong Xuntao’s classic, Magical Painter Ma Liang, it tells the tale of a poor boy who meets an immortal, and is granted a paintbrush that makes whatever he draws, come alive. A few years later, the vivid underwater scenes created by Te Wei in his 1961 Where is Mother?, became the world’s prototype of Finding Nemo, in Chinese watercolours.

Some of this classic output, had even made it over to the other side of the world. During the technician strikes of 1984, the BBC had to look further for content curation, and on Sunday the 23rd of December, brought Little Nezha Fights Great Dragon King to anglophone audiences, in an English adaptation by Louis Elman. This animation depicts the mischievous child god Nezha, and his fantastic battle with the dragon prince of the Eastern Seas.

You may not have heard about The Wan Brothers’ Uproar in Heaven, Asia’s first animation feature in colour from 1961, but you might know, one of its biggest fans, the medic-turned-animator, creator of Astro Boy, Lion King Leo and Buddha, Osamu Tezuka. It was these films that inspired his works, and in turn, generations of Japanese animators. Even long-running shows like Dragon Ball Z, still borrowed from Shanghai Animation Studio’s frenetic energy, bright palette, and inspiration drawn from Journey To the West.

Within China itself, much talent was lost through the political upheaval of the 70s, and the fame of Chinese animation seemed to die away, with only a few in the West remembering seeing these classics when TV stations needed to fill airtime. This did not mean that China simply stopped animating, but all this talent was put into the making of public information films, instead. Eventually though, China realised its lost legacy, and the state began to publicly support and subsidise the development of the industry. There was an obvious period of catching up, with substandard flash animations, and poorly realised CGI flooding Chinese television as a generation of filmmakers struggled to regain the skills the industry had lost.

By 2008, the year that all eyes were on Beijing for the summer Olympics, the Donghua industry had begun a new age, in the 21st century. Works like Qin’s Moon combined gorgeous art and much improved CG animation, with Wuxia, one of China’s best loved heroic traditions, showing that China had once again returned to the quality needed for the world stage.

Seeing this new flourishing propelled me to seek out the distributors of these works, and eventually, to help bring Stormriders: The Clash of Evils, based on Wing Shing-Ma’s kungfu fantasy comic, over to Europe in 2008. However, the previous missteps meant, that few Western companies wanted to distribute it.

Donghua continued to learn and grow. The next stage of its history saw many East-West joint ventures. With releases like 2015’s Little Door Gods, lessons were learnt that it was best to leave the art direction to the Chinese indie creators while providing them the backing of large international studios.

In 2019, I had the pleasure of being invited to introduce Big Fish and Begonia, a collaboration between two young Chinese creators and the acclaimed Studio Mir, at its English premiere. Featuring a host of creatures from China’s oldest myths and legends, it tells of the story of a young spirit as she tries to protect a human soul.  This Daoist-inspired cell animation presents a veritable feast, of traditional art for the eyes,  matched by an equally beautiful and universal love story.

This history of blending technological advances and traditional culture seems to be the winning recipe for China’s new animators, as the huge success of Over the Moon and 2019’s absolutely stunning White Snake have proven, again and again. Based on one of the four greatest folktales of China, The Legend of White Snake has evolved within Chinese literature for over a millennium. Starting off as a cautionary tale and developing to a tragic love story, it’s been the subject of multiple adaptations on stage and screen.

This sequel on Netflix tells it from the perspective of the green snake spirit, a relatively recent addition to the legend. Retaining its Buddhist roots, it injects an alternative twist of  , a retro-futuristic fictional genre that draws aesthetically from diesel-based technology of the early 20th century.

You can already tell that the studios have big plans to cross over multiple films, and build their own mythological cinematic universe. Green Snake is preceded by Light Chaser’s ground-breaking 2020 release, Nezha: Reborn. I can’t wait to see what their upcoming reinterpretation will bring, when the three-eyed protector deity, also known as Erlangshen, hits the big screen.

With China’s huge cinema-going audience mad for animation, it wasn’t going to be too long before my tale went full circle, as Disney tries to capitalise on the trend. Later this year, we will see Pixar release Turning Red, a story about a Chinese family who just happens to turn into red pandas when they get emotionally excited. Usually, I’d cringe at a Western studio attempting to tell such a story, but with the Chinese born director Domee Shi at the helm, we can only wait and see.

Qin’s Moon, Big Fish and Begonia are available on DVD and Amazon Prime. Over The Moon, Nehzha Reborn and Green snake are all on Netflix. Turning Red will be coming to cinemas March 2022.