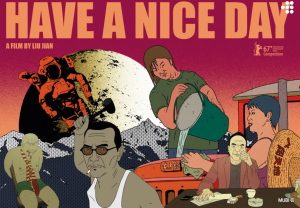 When I first heard about this Chinese animation, it was in the context of bankable dissent, so I was pre-disposed to dismissing this work, but when I actually had a chance to see some of the footage, I was thoroughly impressed, and subsequently, very happy to hear it was being screened at the Genesis.

Set in a small town in South China, the film opens with a small time thug, Xiao Zhang stealing a bag of money from his boss, in order to pay for his fiancée’s plastic surgery, but spawns a tragi-comic chase for this bag of money, setting off a train of events that reveals the society in this urban periphery of contemporary China.

The opening series of shots, depicting street scenes, at the edge of China’s new development, moved me to tears. The backstreet shops, motels and internet bars, the dusty food markets, and half finished construction sites of some architectural grandeur next to a field; the road side communist slogans, the apartment blocks with their courtyards and air-con units , wire poles stuck full of flyers, all rendered in such faithful, if not loving, detail, giving voice, to scenes of everyday familiarity in contemporary China, that have not really been given much previous representation on screen.

Very much an Urban Generation director, what Liu Jian presents here is a series of tableaus of the everyday, somewhat linked by a bag of money. But even in this farcical chase, there are poignant explorations of the modern Chinese psyche, aspirations and religious outlooks, expressed in the wonderfully laconic way that common folk often possess. Whilst Liu intended for this to be an “arthouse film”, I can’t help but think that with a fuller, more defined plot and pacing, we could have a feature length, groundbreaking genre Dong Hua (Chinese for animation) with Liu’s distinctive art style.

The film is a labour of love for creator Liu, who produced the piece almost entirely by himself, even voicing two of the characters, and personally selecting pieces for the soundtrack from the synth pop catalogue of Shanghai Renaissance Project, whose cool urban sounds conveyed the atmosphere of small town China, their retro Mongolian propaganda song perfectly complimenting the Chinese pop art style in a faux karaoke moment of surrealism which adds an amazing splash of colour to the proceedings.

It’s great to see China reaping the seeds sewn in its awakening to independent animation around the early 2000s. With many commercial artists setting up their own studios, Liu certainly seems to be the cream of this wave, working from his own studios LeJoy, which he founded in 2007. With other animatiors such as Liang Xuan and Zhang Chun (Big Fish & Begonia) making their mark on the box office this year, it may very well be that we are ready for the next golden age of Chinese animation.

“Have a Nice Day” is showing at cinemas now and will be available on Mubi soon. 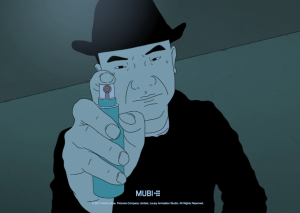