I have the pleasure of presenting the first QMUL Confucius Institute Movie Night. Here’s a little from my introduction.

The Chinese love cinema, in the 130-year history of film, it is difficult to argue that any other culture has adopted film so deeply. Perhaps it is because it isn’t so different from the Pi Ying Xi, Shadow Theatre, which preceded it, but, from the first golden era of Shanghai cinema in the early 1900s, to the iconic propaganda films of the 1950s, and the expansion and maturing of industry by the likes of Shaw Brothers Studios, movies have become, a major part of Chinese life.

Film has also long been a window into Chinese culture for the world, whether your taste favours the incredibly stylish works of Wong Kar Wai, the epics of Zhang Yimou, or kungfu classics such as “36 Chambers of Shaolin”. At first this window was narrow and genre based, now it is widening. 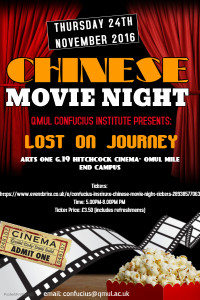 Further details of the event can be found here.