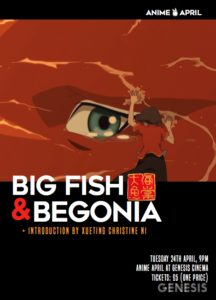 This screening is part of the April Anime season. Anime is faux-French term predominantly used to refer to Japanese animation. Chinese animation is called Dong Hua.

That animation you’ve just seen, “Where is Mama” is a product of the first golden age of Chinese animation. The director, Te Wei,broke a lot of the established rules of the time, and instead of just imitating western animators like Disney, he attempted to create a very eastern style.

And the history of Dong Hua is long, and marked with masterpieces, such as the first ever feature length animation created in Asia, “Princess Iron Fan”. Ever since the 1920s, when the Wan Brothers made the very first Dong Hua from their tiny studio in Shanghai, artists have been creating groundbreaking work by combing traditional art styles with stop motion and cell animation. It has been a tradition of taking the rich source material of China’s myths and culture, and turning them into beautiful and exciting film. It is along this path that Da Yu Hai Tang, or “Big Fish & Begonia”, has come.

This particular Dong Hua was conceived at a very interesting time in China. On the one hand, the State had begun subsidizing animation and software companies, on the other, artists and creators were beginning to use digital technology at home to produce independent animation. Indie donghua festivals were founded and animators who worked for private companies began to open their own studios.

Again, the dialogue between technology and tradition continued. During the early 2000s, Flash animations were everywhere. It was as one of these animations that the ideas in Big Fish were first brought to life.

(First delivered as part of the “April Anime” Season at Genesis Cinema, London, 2018).