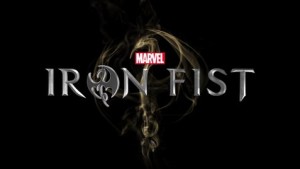 A dramatization based on Marvel’s Iron Fist took a long time coming. The comics themselves, which began in the 1970s, only came into being with the craze for Kungfu films in the US at the time, and even with its blatant cultural appropriation and lumping together of all non-white cultures, it was a beacon as a Western comic with a semblance of diversity. The Fraction/Brubaker series in the ’90s paid its dues to diversity, nodding to a long line of warriors from different backgrounds, who held the title of Iron Fist, though still representing in quite stereotypical terms the nation and the culture to which it owed so much of its world building.

In the 21st century, with the popularity of superheroes TV series, and the success of the “Daredevil” and “Luke Cage”, many have been anticipating one on the warrior of K’un-Lun, and there’s been calling from fans and celebrities alike for an Asian casting of its protagonist Danny Rand. The series had been delayed, due to creative debate on the on-screen depiction of the hero’s fiery powers. At last, it was released on Netflix on the 17th of March, and I watched through it all in one go to bring you a continuous commentary on social media. Owing to the positive response I’ve received, here’s a write up of the various themes and points of interest that have come to light.

The opening is characteristic of Netflix, with the “ink wash” effect, also pleasingly reminiscent of recent Kungfu movies such as “Iceman” and “The Grandmaster”. The music though, is rather generic in the opening, and the soundtrack, which exploits the success of 80s-style synth music for “Stranger Things”, feels rather out of place. That said, it is preferable to the hackneyed Eastern woodwind interlude that crops up whenever Danny Rand meditates or practices Tai Chi, or exhibits puzzling wizardry and mind-control abilities, totally unrelated to his powers. 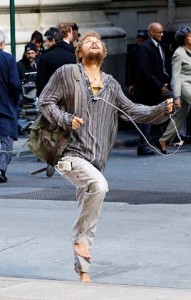 The show deserves credit for Rand’s first appearance, which is well-executed. Unfortunately, this is quickly marred by what would become my main bugbear throughout the show. He has no martial arts poise. It was hard to be believe that this person on screen was the champion of warriors, who had been rigorously trained and moulded by masters of a mystical city for fifteen years, which, although he was born on earth, is over half of his life. What we have instead looks more like a distressed backpacker who’s been on a long trip and hasn’t bothered to shave, shower or change his clothes. Hogarth calls his appearance “the homeless hipster look”, but tidiness and cleanliness seem like pre-requisites for the martial artist, because fleas or flabby clothing would certainly interfere with training.

There is also no restraint, discipline or method to Danny Rand’s behaviour. These are all necessary qualities to anyone who practices martial arts. As the season goes on we see him rage driving on the top of the Rand building and throwing a table-flipping tantrum in a restaurant. This makes hardly plausible the plot twist towards the end of the season, that his powers are blocked, because he has become filled with rage. It is painful to have to point out that typical error this show has committed, the Tarzan complex, that any character who has been absent from Western civilization, must be uncivilized and act like a savage. It is possible to depict warriors from other worlds or times, transplanted on earth in the present, with dignity. Take “Thor”, “Iceman” or Danny Rand from the Roy Thomas/Gil Kane comics who arrives in New York, very confused, but still in control and full of purpose.

I appreciate that the actors have at least tried to speak some Chinese, though the pronunciation is painful to listen to. I can barely make out the brief conversation between Colleen and Danny in the park. He notices that her surname is Chinese, she comes back with a defensive “why do you ask?”. Since the series aired, westerners living in China have told me they were put off the show by the atrocious pronunciation. Finn Jones did a better job with “Lei Gong”. Considering how many times his character refers to K’un-Lun (pronounced “Kwun-lun”), one would expect him to have had enough practice to say it properly. It’s a relief that you can’t really go wrong with “Qi”. I’m pleased with the dropping in of Chinese phrases in the script that Firefly does so well, such as “Ge Men’er” (哥们儿, “Brother” or “Bro”, an informal address from one male to another to indicate comradeship). 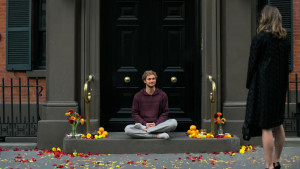 References are made to Chinese culture all the way through the show, from the flowers, oranges and incense outside Joy’s door as an offering of friendship and good luck, to the Monkey King mask at the parade in Chinatown, and (although it was never in focus) the shrine in the background at Yang Haiqing’s restaurant. At one point Danny explains the concept of hungry ghosts to Joy. In traditional Chinese belief, these are spirits of the dead who wander the world of the living when the gates of the underworld open during Ghost Month (Zhong Yuan, a major festival of the dead). These are either ghosts who want to visit their loved ones, or lost souls doomed to wander in purgatory, unable to pass to the next world. These ghosts are treated with lavish meals during this occasion.

Quite a few of the fundamental principles of Kungfu are touched upon and accurately done. The basis of Kungfu relies on building up one’s inner strength, this is what Danny teaches Colleen during a fight. And had she not heeded his advice, and used the opponent’s strength against him (the essentials of Tai Chi), she could not have defeated a man three times her size in the fighting ring. She remarks that the way Danny fights is like “second nature”. Kungfu is of course, more than just fighting, it is a philosophy and a way of life that become part of one’s being.

Despite her appreciation of this fighting style, even with a father who abandoned her, it seems a little too harsh to want to hide her Chinese identity. Nor do we ever find out why she is devoted to her dojo but doesn’t “want the hassle” of teaching Kungfu. Whilst I do appreciate the scenes shot in Chinatown, such as the Monkey King mask at the market, the glaring errors make me wonder if the show had made proper consultations on China. Lion dances take place during Chinese New Year and on auspicious occasions such as the opening of a building. This is an extension of the function of lions, ferocious beasts, as door gods or guardian deities. Dragon dances take place at the end of the lunar new year so the two would never happen together like they did in the series. And the Chinese do not wave glow sticks around like they’re at a concert, during these activities, which are part of their everyday lives.

Efforts continue but it doesn’t get much better as the season goes on, with Bakuto postulating that the Qi healing was mainly “a theory” among Qigong masters, after teaching Danny how to replenish his Qi by harnessing the energy around him, which is only a basic practice to anyone versed in kungfu. In Wuxia stories, after a major battle, when a swordsman is badly injured, the first thing he or she does is hide away in the remote forests or mountains to xiu lian, conserve and rebuild their Qi. 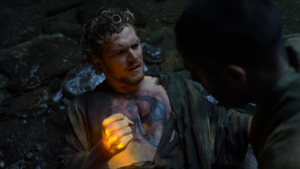 One thing the series did get right was the matter it spent some time considering, the onscreen manifestation of the Iron Fist. The organic glow and presentation of Danny’s powers being triggered only when he is in a fight, remain tonally faithful to the original comics, in which Danny undergoes years of harsh training, both in combat and the in physical strengthening of his fists (including a daily routine of punching buckets of stones) to ready his body and spirit for the possibility of becoming a vessel for the Iron Fist. In order to do so, he draws from within, a will that is a match in strength to the power of the Fist. 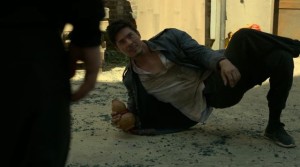 One group of viewers the series may have a chance of gratifying is the comic fans, given the numerous nods to the comics, some more direct such as the Bride of Nine Spiders, Immortal Weapon from the later comics reincarnated as a minion of the Hand; the Leopard Punch Danny teaches Colleen that is representative of one of Iron Fist’s signature moves. After all, the superhero was originally created by martial arts enthusiasts. Not to mention show stealer Lewis Tan’s Zhou Cheng, a fighter Danny encounters on the premises of Gao’s operations in China, the host of Chi’Lin, the mystic beast who covets the heart of Iron Fist in the comics. Other nods are more indirect, such as the multitude of sales reps of the Hand who resemble Daughters of the Crane in their fighting skills and allure. However, the tying of so many characters to The Hand seems too great a sacrifice to integrate the individual story with the “Defenders”, it is a shame not to make more use of the fantastic diagesis in the world of Iron Fist. 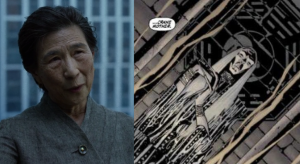 One of the few successes of the show is the creation of Madame Gao, a favourite of mine ever since she first appeared on screen in Daredevil. Apart from being a tribute to the hermit master trope in Wuxia, I have a soft spot for well-spoken, neat little old ladies who prove far tougher than they look. From her references to life in the 16th century, we know that she is some kind of immortal and we know her she is an employee of the Hand whose goals are now at odds with the organization, but her background is still largely a mystery. Her words and actions at the end of the first season, suggest she is not so black-and-white a villain as she first seems. Her cross-series association with K’un-Lun hint at the possibility of a connection with comic character Crane Mother.

If there is a season 2, I really hope that it will be less of a Ward & Joy or Meecham Dynasty show, but explores more of Danny’s history and the city of Kun-‘lun, which took so long to appear in the first series, that I really was beginning to wonder if the producers had run out of budget, ideas, or both. As an immigrant writer on China based in the West, I smile tolerantly through, almost on a daily basis, having my native culture regurgitated enthusiastically, in appropriated versions from other Asian countries that happen to be better known in the West. I feel deeply saddened that the Chinese cultural elements presented positively in “Iron Fist”, such the extended exploration on the use of Qi, customs of offerings and beliefs in hungry ghosts, are not attributed to China. I will probably see the second season, if only to make viewers aware of the flaws in the representation of a culture which I am extremely proud to see portrayed in Western media, even if it is often not labeled as Chinese. 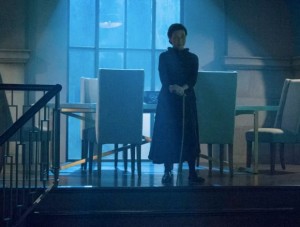