7th Mar, 2014 Journey to the West: Conquering the Demons 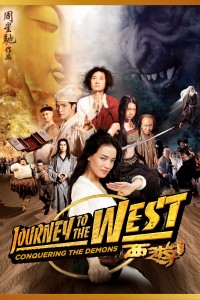 2013’s Chinese New Year movie, Journey to the West: Conquering the Demons is a kungfu fantasy film directed by Chi-kin Kwok and Stephen Chow. It’s based on one of the four cornerstones of Chinese classical literature, Xi You Ji or Journey to the West. Set in the Tang Dynasty, the novel tells the story of the monk Tripitaka and his perilous journey to India in search for Buddhist sutras, accompanied by his disciples and bodyguards, three reformed demons – a mischievous but super powerful monkey spirit, a fallen god turned pig demon and a fish demon.

The film takes a refreshing look at a relatively unexplored section of the story, the recruiting of the three disciples. It opens with the Fish Demon terrorizing the inhabitants of a water village and Xuanzang, a hapless, gentle-hearted demon slayer and monk-in-training, comes to the rescue. During this fight Xuanzang meets Miss Duan, who pursues him rather like the demons he tries to slay. They catch the Pig Demon and meet other demon slayers, all in time for the grand finale, the taming of Monkey.

In terms of cinematography, choreography and suspense, the best action sequence in the movie is not the grand finale, but the Fish Demon fight, seconded by the Pig Demon scenes. The character designs of Miss Duan and her gang are reminiscent of Zhang Ji Zhong’s 2011 TV series (featured in my From Sand Monks to Spirit Bombs panel). In the same way that wuxia fantasy elements of Xi You Ji is given full flow in Zhang’s series, this film’s daring and visually stunning tableau in the Pig Demon’s lair really brings out the mystique and horror of the adventures.

In his 1994 Chinese Odyssey (also discussed in my panel) Stephen Chow mocks Tripitaka and his sermons mercilessly.  20 years later, as co-director and scriptwriter, Chow gives the monk much more sympathetic treatment. I was touched to tears as Xuanzang explains why he reads nursery rhymes to demons. Considering the complex moral issues put forward by the demons’ backstories, I was disappointed by the ending, which in quality and tone resembled a glib and hurried ending of a TV soap. Perhaps it was cut short to make space for fight scenes with Monkey, which went on for far too long. I’d rather have seen a better ending to this otherwise great movie. Nevertheless, Chow’s hallmark mixture universal comedy of errors with black comedy, slapstick and cheeky in-your-face humour, brings out profound reinterpretations of values that are more benevolent than the original orthodox Buddhist version.

As a zhai (Chinese equivalent of otaku) writer on C pop culture, I watched this movie with glee. For a start, one character is called “Fist of the North Star”. The makers have clearly read shonen manga, just look at the larger-than-life representations of fighting techniques looming behind the characters. Monkey’s portrayal has an element of the Dragon Ball saiyan, especially when the giant gorilla appears as he powers up. FF fans will revel in Prince Importance’s ultimate sword move. The giant Buddha and palm recalls Akira, Evangelion and Avatar the Last Air Bender. Monkey’s pale hair, ghostly complexion, trickster speech and gestures bear remarkable resemblance to Tim Burton’s Beetlejuce. This film could not have been made before Toho’s Monkey Magic, the 70s style pop song in the soundtrack just reminded me so much of Gandhara. There’s even a treat for fans of steam punk. This movie has definitely reinvented a classic to make it relevant to contemporary audiences.