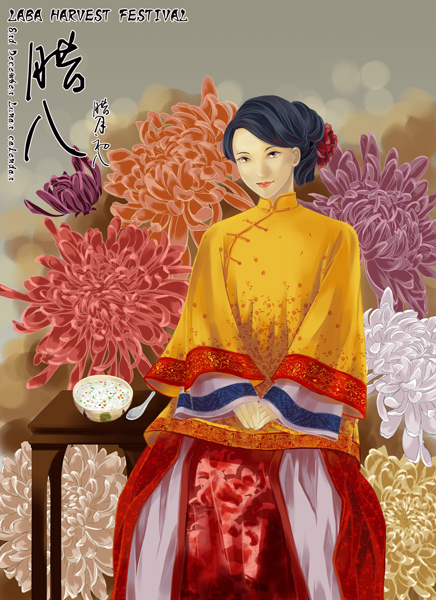 Winter Chinese festivals are few and far between. 腊八 La Ba is one of them. Other than meaning “wax, 腊 ”La”, is an ancient ceremony of offering to the gods that took place on the 12th month of the lunar calendar, on the 8th day (hence “ba”).

La Ba is mainly for three things – remembering Buddha, scraping the barrel and warning against wasteful excess. The founder of Buddhism, Shakyamuni, was a prince who became so troubled by the suffering of mankind that he renounced his royal status. After years of ascetic meditation, it is believed that on this day, he attained enlightenment and became Buddha, the “Awakened One”. So during La Ba, people eat congee to remember the hardship Shakyamuni went through.

As well as numerous tedious stories of spoiled kids from rich families who starved on La Ba after squandering away their food, there are sad La Ba stories of labourers building the Great Wall, who scraped together what beans and grains they could find at this time of the year, but still perished due to the lack of sustenance.

It’s apparent from these stories and from the huge variety of ingredients in La Ba congee that this is a time of scarcity and one has to be innovative with what one’s got. Dates, lotus seeds, almond, red bean, peanut, sticky rice, pine nuts, mountain herbs, walnut, raisins, dragon eye fruit, rose petals, are just some of the ingredients.

On the eve of La Ba, the ingredients for the sweet congee would be prepared, they are brewed under a low heat, throughout thenight, ready for consumption after ceremonial offerings of the next morning. Flowers are often carved out of vegetables, placed in a bowl of water on the window sill, so that in the morning, children can got out to play sucking on their pretty floral ice lollies.

The Anhui people have Dou Fu (tofu) making contests on La Ba, whilst the northerners make “La Ba Emeralds”, pickled garlic thatturns green in vinegar and comes to resemble smooth jade. Farmers make congee out of five kinds of beans, adding sparrow heads made out of dough into the mix, in order the “bite the heads off” sparrows who come to eat their crops. Sometimes, tiny lions carved out of the fruits and nuts are placed on top of the congee for children.

Of course, nowadays, supermarkets abound with different brands of tinned 八宝粥 “ba bao zhou” , the “Eight Treasure Congee” evolved out of La Ba food, that can be poured into a bowl and consumed immediately. What would be in the fun in that! So whilst I’m off to scraping my post-Christmas barrel and brewing up some interesting overnight congee, I leave you with a couple of delicious pics.

The featured image of this article is by Chinese artist Clover Lee (aka CRINS).