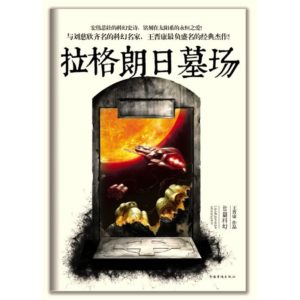 The speedboat had been racing for half an hour. The night was thick and heavy, the lights on the coast had gradually disappeared. Ahead, several dots of light suddenly appeared on the black surface of the sea, growing stronger and stronger, until they merged into a dazzling mirage, in which multi-coloured neon streams danced wildly.

Lu Ke, who was driving the speedboat, saw that his passengers had already come on deck, gazing at this magical realm they could hardly wait to enter. This was the entire crew of the aero-space plane “Celestial Zoo”, and Lu Ke’s diehard buddies. The Old Ape Lahli, the Pakistani, 65 years old, lanky, with a face covered in wrinkles like a dried walnut. He was supposed to be retired. The Hyena Bancas, the Galician Spaniard, the greedy bastard had such powerful teeth that

during one voyage, he gnawed through a mooring rope to get himself out of a scrape. Bulaika, the Little One, Kenyan of the Kikuyu Tribe. Often seen humming his jaunty African melodies. And Lu Ke himself. “Lu Ke The Tiger”. The space transport industry had been in drastic decline for the last few decades, and his “celestial Zoo” was the only private craft still in business.

The “magical realm” was actually a few lonely buildings emerging from the water, dotting the wide surface of the ocean like stars. Below their feet was the once prosperous Macao, but in the past fifty years, humans had cried wolf too many times and grown complacent of warnings, but when the wolf really came, the Green House Effect had struck fiercely. 380 million square kilometers of the Southern Polar icecaps had melted in a matter of weeks, causing sea levels to leap 60 meters, turning hundreds of coastal cities into dragon palaces. People were forced to migrate to the highlands, but the barren highlands couldn’t instantly become fertile soil. Global floods induced the Earth to erupt, destroying dozens of cities in a few years. Areas that had always been highlighted as safe blue zones on the map, began to be marred by ugly earthquake warning markers..

The Earth had gone mad, the madness of Humanity had induced madness in Mother Earth. Wracked with remorse, Humanity struggled on desperately, only able to stop the train of civilization from crashing as it heads towards eventual downfall.