Feb 16th The Romance of Lantern Festival, and Its Bizarre Customs 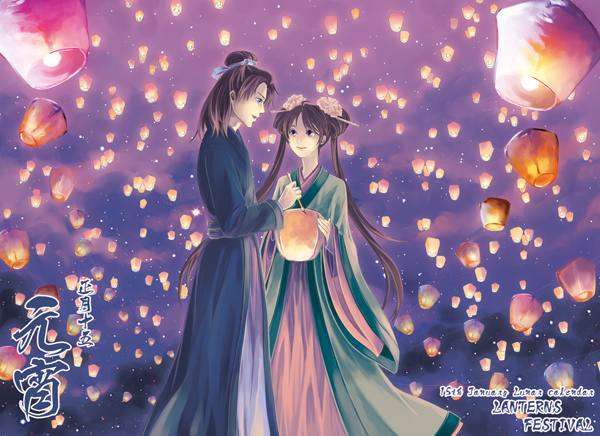 Lantern Festival or 元宵节 (“Yuan Xiao Jie”) falls on the 15th of the first month of the Chinese lunar year. It is an important time, being the end of Spring Festival celebrations when people actually begin their year, and the first full moon.

Yuan Xiao Jie originated as a religious celebration, when monks lit lanterns to contemplate Buddhist reliquaries on this night. Later celebrations became more secular. Emperor Tang Xuan Zong once organized a carnival with 50,000 lanterns in the ancient capital of Chang’An.

Hence the popular name by which the festival is known.

In the old days, lanterns were gifted to newly wed and pregnant women, with good wishes for conceiving healthy male offspring. Living in China as a child, I remember taking my lantern to the night fairs, where, apart from being impressed by huge lantern displays of myths and legends, I enjoyed watching dragon dances and drum shows. Not so much these days, but lantern riddles used to be a popular amusement.

Whereas Qi Qiao only became more popular in the past decade as an equivalent of Valentine’s, the Chinese have looked for romance on Lantern Festival for hundreds of years. It is a time for single men and women to find love, a particularly exciting time in the past for young women from respectable families who had not yet “come out”. The few days during Lantern Festival was the only time they could step out of their family mansions, even socialize with the opposite sex unaccompanied. Probably more a period of head ache than celebration for the parents!

Through the ages, people have developed some strange or even bizarre customs for this night.

Offerings are given to 紫姑, “Zi Gu”, Goddess of the Toilet. Some believe she was a scholarly woman forced to become the concubine of a man whose jealous wife murdered her in the toilet. After hearing reports of her spirit weeping in the toilets, the Empress Wu Zetian deified her. An alternative identity of Zi Gu is Consort Qi of Han emperor Liu Bang, after whose death, the jealous empress punished her severely before leaving her to die in the toilets.

Zi Gu has been the guardian angel of women in ancient Chinese society, especially capable women who were treated unjustly, with many scholars among her devotees, including the great poet Su Shi. On Yuan Xiao Jie, the goddess was not only worshipped but consulted on a wide range of matters from commerce, agriculture to birth giving, marriage and death. Her consultations used received during the “Fu Ji” ceremony, traditionally located in the bog and involving a manure basket. Modernity has adapted this into a more sanitary practice. More on this from me in the not-to-distant.

Women go on the “Hundred Diseases Walk” (游百病 ,”You Bai Bing”) in the company of their friends, to rid themselves of any ill luck or illness to come. It is believed that any bridges must be crossed.

It seems you can’t celebrate a major Chinese folk festival without stealing something! In certain regions, single women used to steal pak choi from houses of members of the opposite sex, but only enough of the said vegetable to cook a single meal. They would then compete to eat the most pak choi from that meal, to ensure the best chance of finding a spouse in the year to come, and for their silk worms to produce the best silk. A more satisfactory result for the latter wish could be achieved if they just fed the pak choi to their silk worms.

The Yi minority celebrate Wu Ba on this occasion. In a ceremony with tribal percussions, women dress up as tigers, leopards, hares, foxes, bears and so on, dance around the fire whilst the men dance around them holding pitchforks and arrows, in a bizarre hunting and mating ritual. Depending on what their into, your new date may find this really hot, or a complete turn-off.