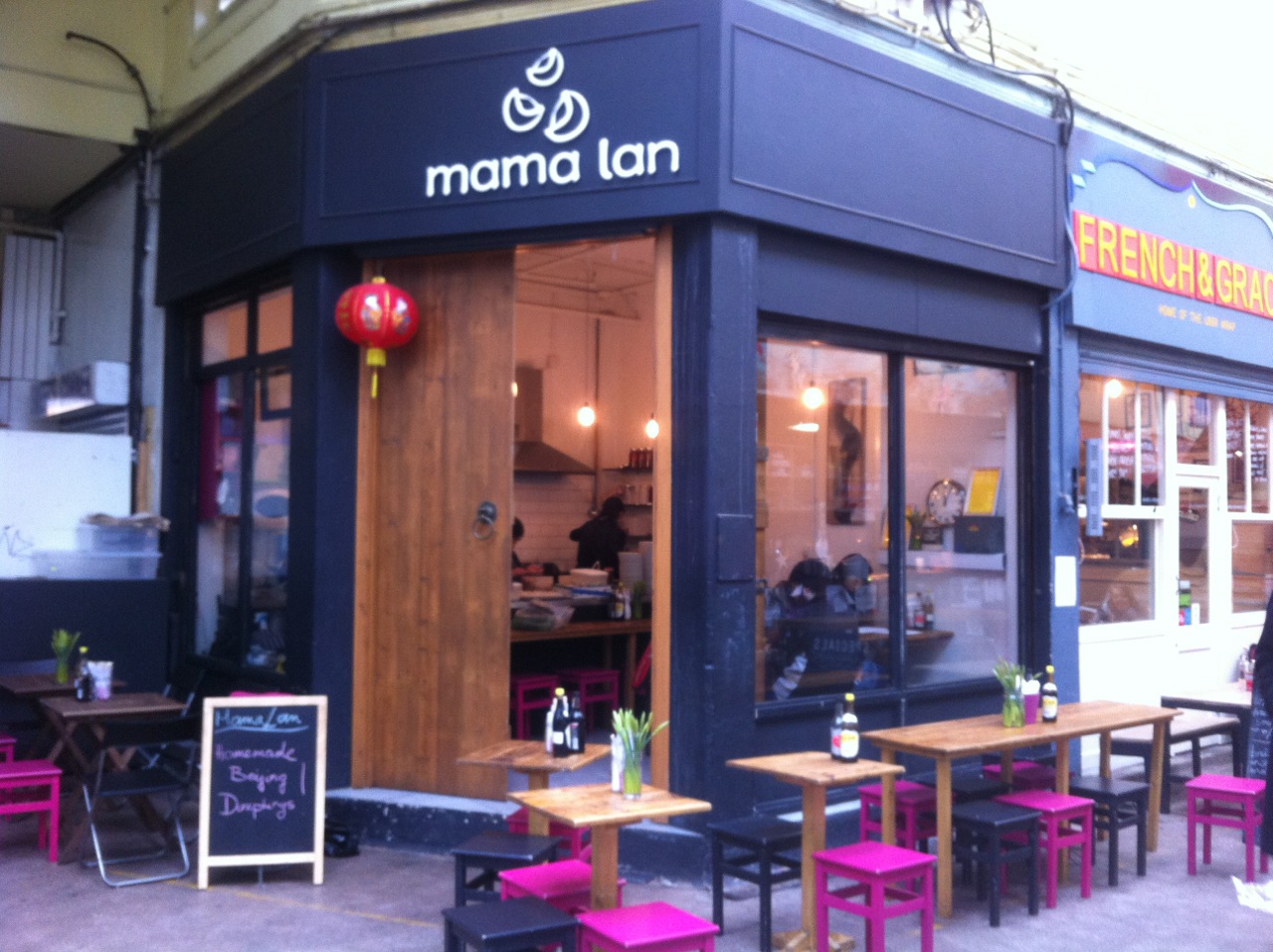 Situated in the recently rebranded and uber-trendy Brixton Village, 5 minutes walk from the Underground Station, is Mama Lan, a tiny L-shaped dumpling stall run by entrepreneur Ning Ma. As a teenager, Ning Ma immigrated to London with her family, and in 2010, quit her job in finance and put her resources towards recreating the taste of the family-run Beijing dumpling stall of her childhood.

Amongst the simple décor of scrubbed wooden tables and the remnants of it’s coffee shop kitchen, the only overtly Chinese ornament is the new year lantern outside. The authenticity of the street stall style all ends up where it counts. The sight of Zhenjiang black vinegar and Pearl River Bridge soy sauce sitting on every table, next to a scrubbed out jar wedged full of bamboo chopsticks did bring up a wave of nostalgia.

The morning’s weather was numbingly cold, and I was glad to find a good selection of Chinese hot drinks, especially the Mama Lan concoction of chrysanthemum, goji berries and rock sugar. Although the place is inside the market and enclosed, the pervasive smell of cooking, the chattering and clattering of Chinese cooks and the outside benches do serve to create a street stall atmosphere. 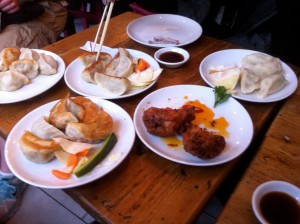 We tried each type of dumpling from the select menu, Beef, Pork, Mushroom, and Prawn. Not having ordered “xiaolongbao”, I was startled by spurts of soup from the beef and pork dumplings, which both seemed rather salty. All the dumplings, except the Prawn and waterchestnut Jiaozi, came as Guo Tie, the fried variety. I couldn’t help but wish there was the option to order the dumplings just boiled with broth,  and whilst a lot of people will appreciate how meaty the pork and beef dumplings are, they left me yearning for the more complex tastes of more vegetable rich mixtures.

Mama Lan’s prawn dumplings definitely stand out though, with a nice range of flavours and textures from chives, water chestnuts and (I think) sesame oil.  Although the dumpling skins are not a gourmet translucent or wafer thin affair, they have a definite and lovely handmade feel, and a taste which doesn’t detract from the filling. The accompanying pickles that come with each serving are a nice touch.

Mama Lan’s also serve a major staple of northern street food, the beef noodle soup, along with a few side dishes. On recommendation, we tried the spicy chicken wings, which, whilst having a rich aniseedy, peppery coating, weren’t really enough to merit their endorsement.

There seems to be a conflict of objects. Mama Lan wants to bring you typical Beijing street food, and handmade dumplings with totally organic ingredients. The contrast between the street stall vibe and the reserve of the staff, the glum, soft-handed waitress more interested in flower arranging, strikes me as part of the all-too-prevalent trend of cleaned up street food in up-market venues which are too often being taken for authentic. Still, I really cherish this experience of winding my way through south London streets and markets to find this rare little gem at the heart of Brixton.