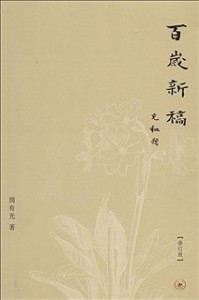 This is a collection my writings over a decade before I turned 100, title “Manuscript of A Century”.

I was born on the 32nd year of Guangxu in the Qing Dynasty (1906)，I have lived through the Beiyang, Guomindang governments, and the new era of China after 1949, friends teasingly call me the “Si Chao Yuan Lao”*.  Over this hundred years, I have weathered many storms, the biggest ones being the eight-year war for independence and ten-year “Cultural Revolution”, almost twenty years of destitution and homeless misery.

During the Sino-Japanese War, I was in Chongqing, a Japanese bomb explosion right next to me, people around me perished, but somehow, I didn’t even get hurt. During the “Cultural Revolution”, I was exiled to be “educated and rusticated” in Pingluo, Ningxia, and had to swear along with everyone else, we were “never going home”. After Lin Biao’d death, we all got to go home.

From the winter of 2003 to the spring of 2004, I was taken to hospital. I celebrated my 99th birthday there, the staff gave my a big cake, and an even bigger pot of flowers. People at the hospital heard that was a centenarian in their midst, and came to peep at me from the windows, I became an animal in a zoo.

In my old age, I mainly read books on culture and history, seeking to find out more about cultural, historical backgrounds and development. Foremost, I wanted to understand three countries: China, Russia and America. It was hardest to understand one’s own country, as imperial leaders through the ages skewed history, obscuring the truth. Archeology isn’t easy, but contemporary studies is more difficult.

*Revered One of Four Reigns. Derived from San Chao Yuan Lao – a term of respect for the highest statesman who served over the reigns of three emperors.