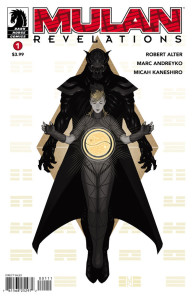 I was delighted when Dark Horse got in touch with me about the upcoming title “Mulan: Revelations”. Unfortunately, as this was back in the middle of convention season, I couldn’t write about it immediatey, and it was only when I saw the title on the shelves at my local comic store, that I received the kick to actually get the review up.

The story begins where you’d expect it to, on the battlefields of ancient China, 500 B.C. After a heroic fight, Mulan is on the verge of being slaughtered by a demonic “Hybrid”, when she is rescued by the immortals and restored to life as a kungfu trained citizen of Shanghai in 2025.  This futuristic dystopia features all the tropes you’d expect, from senselessly stratified society, to cyber diseases. Science and magic come to loggerheads when the reincarnated Mulan, unaware of her legacy or destiny is discovered to be immortal, gaining very unwanted attention from the corporate owned robot cops. Faced with this threat, her uncle and mentor reveals the truth about her perculiar existence. 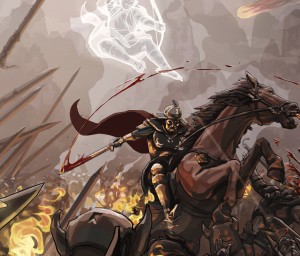 The gorgeous art style blends a soft but colourful “ink wash” palette with the broad brush strokes of a
Western modernist style, solid outlines appear only sporadically for emphasis.  From the ancient battlefields to the towering futuristic cityscapes, the book fills the eyes with total sensory pleasure. The beautifully drawn reflections and mirrored images provide interesting perspectives. Translucent tones, bring out not only the luminescence of future Shanghai, but also a sense of the transcendental. Art complimenting subject, serving to bring a sense of unity between the ethereal immortals exercising their spiritual powers in the past. and the hyper-tech of 2025 Shanghai. It’s great to see the fine and delicate features in East Asian characters drawn well.

First issues can often be dreadfully laboured, tasked with world building, character introduction, and providing enough of a tone for the series to hook new readers, especially for a title outside the capes and tights genre. Here, the scene setting spans thousands of years, involves a few groups of characters, but Andreyko successfully weaves a tight plot, populating it with select episodes and key dialogue, aided by the fresh approaches to sequential art, with some pages very reminding me of traditional Chinese windows, others like overlaid computer displays, or remnants of shattered glass, perfectly complimenting the fast paced plot.

The title definitely aims to entice scifi fans , its architecture of spirally, geometric skyscrapers, flying vehicles, and cramped buildings clambering up the sides of narrow downtown streets with mish mash neon signs, definitely pays its dues to work like Ridley Scot’s masterfully constructed backdrop for “Bladerunner”, as well as Shirow Masamune’s Neotokyo. Dark Horse themselves have hailed this work as “Shanghai Cyberpunk”, a phrase which seems to follow the title from review to review. Mulan herself, the ass kicking, motorbike-riding androgene, has definite hints of Dark Angel’s Max Guevara,  or Snow Crash’s Hiro Protagonist.

The real Mulan lived in the Wei Kingdom of China in the 5th century, during the Three Kingdoms Period. As the state demanded conscription from every family, Mulan stepped forward, to excuse service from either her too young brother, or elderly, invalid father. For a decade she lived a soldier’s life in male disguise, enduring hardships that even her male comrades baulked at, fighting to defend their country’s borders. Poems and songs have been written about her deeds in all subsequent dynasties, and her position as one of China’s most beloved folk heroes remains to this day, where she features in China’s national curriculum, not to mention modern a myriad of films, TV series and musicals. She is a beacon of female power and strength in a deeply patriarchal society. “Hua Mulan” was the name she registered herself as in the army. It’s still uncertain what her real name was.

I am delighted that Dark Horse has drawn on the legend for such a contemporary and imaginative retelling, and whether the audience know of  Mulan’s legend, have grown up with the dreadful Disney version, or are completely new to the character. It’s only through adaptation, reinvention, and retelling that a legend can truly evolve and live on through the ages.  Mulan Revelation issue 4 is released November 18th, and the first three are still available for re-order. If you are unable to track them down, the first trade paperback hits the shelves January 26th next year.