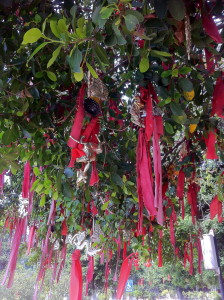 This coming week sees the celebration of the birth of Chinese 海神(“Hai Shen”) or god of the sea, which falls on the 11th to 13th day of the second lunar month. So I am writing about the wonderful Nanhaishen (literally “God of the South China Sea”) Temple on the outskirts of Guangzhou, a hidden treasure I discovered on my last visit back. In fact, Chinese sea gods still inspire Western culture today.

Built at the end of the 6th century, the Nanhaishen Temple is the only survivor of four major ancient Chinese temples, dedicated to the sea. It was here that ancient emperors offered up prayers of calm tides to Haishen. Good sea passage was vital to the commerce of the Pearl River Delta region, and this temple was seated at the origin of China’s Maritime Silk Road, which began in the Qin Era. From the 6th to 13th century, Guangzhou was one of the greatest ports of the East. Even today, Guangdong and Hong Kong still generate a huge proportion of China’s global trade. Each year, Haishen’s birthday is celebrated by folk across the Pearl River Delta, featuring carnivals, temple fairs, dragon and lion dances.

Situated on fertile terrain known as “Dragon’s Lair”, Nanhaishen Temple has serene hill top gardens providing gorgeous views of the sea. As well as the usual courtyards and halls housing the shrines, it has an interesting collection of relics, a giant Ming copper drum, a Qing bell and stone tablets from the major dynasties. On either side of the front gates, is a pair of Duilian featuring a Qing period couplet eulogizing the power of Haishen, transcribed by renowned Cantonese calligrapher Lu Youguang.

I was intrigued by this “Zhuque Plynth” in the gardens. In Feng Shui cosmology, Zhuque is the term for the phoenix. South is represented by the element of fire, the phoenix and the colour red. The rooster is considered to be the closest earthly representation of the phoenix, so, cockerels with their crimson crowns and wattles have become linked with Haishen (This also explains why chicken is such as important good luck dish for the Cantonese during festivals).

One interesting feature is the side shrine dedicated to Guan Di, also known as Guan Yu or Guan Yunchang, the fearsome Shu warrior in “Romance of the Three Kingdoms”, who was equally revered for his skills in battle, bravery and wisdom. Apotheosized as a protector of the people, he is typically portrayed with a fiery red face, symbolizing justice and courage. He is also a popular god amongst merchants and relatively well known overseas, featuring in many Dynasty Warrior video games, Gundam series and was recently examined in a short story by the award-winning author Ken Liu, “All the Flavours”.

“All the Flavours” is the story of Logan, a modern Guanyu living amongst a group of Chinese workers in the gold mines of 19th century Idaho. Their presence bring prosperity to the region, where locals are at once fearful and fascinated by their strange ways, their delicious smelling cooking, their joyous carnivals and the luscious produce they coax out of the ground. One young settler, Lily, strikes up a friendship with Logan, and the story weaves in and out of Logan telling her about Guanyu and how he became a god.

You can read the story here:

A unique feature of Chinese gods is that they tend to be based on real people, who were endowed with god-like status by the popular consciousness over the years. There is a dizzying mish mash of legends and stories surrounding Haishen. Some say that he was the god of fire sent down from the heavens to help stop the floods that were plaguing the southern lands. Some say that he was one of the eight legendary ancient kings who taught the people of the South how to make and use fire. Others say he was Zhu Rong, a musician who wrote the most delightful melodies, or a very capable official who worked hard to serve the people.

The statue at the shrine certainly represents Haishen in a very human way, but his six commanders are portrayed as fierce, larger than life warriors. Haishen’s wife is also deemed worthy of a shrine, as this temple was once apparently their home, made evident by this traditional style bed with intricate Cantonese carving. She was a Shunde born woman who bred silk worms, and became Haishen’s wife after their deification. Interestingly she is not only credited with the same powers as Haishen, but also the additional role and ability of protecting women and children.

Another version of the sea god, a female deity, is Mazu, whose fame spread along the south eastern coast to Taiwan, and to some extent overseas. Mazu (also called Lin Mo,) is a young woman from a family of merchants who lived on Meizhou Island during the 10th century. A devout Buddhist, she chose to remain celibate for her faith. During a storm she saved her brothers at sea with her spiritual powers, which soon after extinguished her own life. She became the goddess of the South China Sea, patron of sailors and seafarers.

Lin Mo recently featured in Anthony Horowitz’s YA novel series “The Power of Five”. A young girl from South East Asia, adopted by an English couple and brought up in the serene village of Dulwich, finds herself in Hong Kong, marooned amongst the living dead and getting mixed up in Triad business. She dreams of a powerful, fiery dragon moving closer and closer, not realizing that, in distress, she had been summoning the dragon, a typhoon. It is at during a visit to the Tin Hau (Cantonese name for Mazu) Temple that she is rescued by members of the White Lotus, who know that she is the reincarnation of Lin Mo, and has the power of control the weather.

I leave you with pictures of these wonderful wishing trees in the Nanhaishen Temple gardens. Amongst the golden dragons and boats, there were also tiny jackfruits to remember the emissary of Nepal who came to China during the Tang Dynasty and settled in Guangzhou. Couples tie pieces of red cloth to an Acacia tree as mementos of their love.

So if you are taking a sea voyage any time soon, if you’re a sailor, or involved in the shipping trade, why not make an offering to Haishen this week. And when you’re in Hong Kong or Guangzhou, the sea temples, often hidden away from the well worn tourist path, are well worth tracking down and visiting!