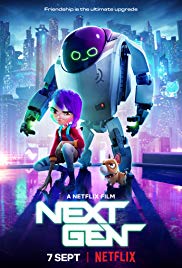 I don’t just love China and culture. I like robots and movies too, so I’ll always take the opportunity to look at any area where these loves collide.

“Next Gen” is an animated film currently available on Netflix, set in a futuristic society in which advanced robots look after every stage of human existence, from home appliances, to drones, doors, even education. Justin Pin, the man-bunned CEO of IQ Robotics is adored like a superstar, and his Q-Bots are the must-have personal assistants. Angry, disillusioned high school student Mai Su (Charleyne Yi), bullied at school and trying to cope with her father’s abandonment, made worse by her robot-obsessed mother Molly (Constance Wu), ends up dragged along to a product launch for the latest bot. Getting lost in the labs, she accidentally activates a prototype robot, codenamed “77”, who becomes attached to her, and escapes the lab to find her. The two begin an unlikely friendship, whilst the robot’s original creator finds more sinister things afoot than a missing robot.

This project is of course, a Chinese Co-production, having been developed between Chinese and Western studios. Whilst one may look at the key frame on Netflix, (angsty Asian kid finding a friend in a big white robot) and dismiss it as a knock-Off Big Hero 6, it earns its science fiction chops, delivering something that is far more authentic, and insightful than the Disney film. Tangent have done an excellent job on the backdrops of this futuristic city, providing gorgeous proof that China has come a long way in just a decade, when it began to explore computer generation Donghua. The skyscraper architecture and intra-city highways are reminiscent of today’s Chinese metropolis like Beijing, Shanghai and Shenzhen. Chinoiserie is present in more intrinsic ways than just the set dressing of Western cyberpunk universes, I’m delighted to see a Hanzi-filled Chinese version of the future representation in a work created by the Chinese. Charming little touches such as the traditional talisman on the back of the robotic gate to the Su house, is a demonstration of an understanding of contemporary China, where ancient tradition and neophilia co-exist. I’m delighted that the Chinese creators have opted to draw their heroine and her mother to actually look Chinese, and whilst the people with power are based very squarely in white California (drawing heavily from the Steves of Apple for Pim and Rice), we also see the likes of  Kiana Lede as Mai’s Frenemy Greewood.

“Next Gen” is a knowing offspring of classic sci-fi, and various tropes and easter eggs are littered around the scenes to delight that particular audience who’ll recognise Dragon Ball’s Capsule Corp logo on billboards, or the ever cheerful doors from Hitchhiker’s Guide To the Galaxy.  With many visual queues, subtle and obvious, taken from Terminator, Iron Man, Robocop, and of course Bladerunner, where both the Q-Bot’s Gen 6 and the campaign slogan, “better than family”, link to the Tyrell Corporation’s erstwhile products.

For a children’s animation, “Next Gen” shows remarkable depth, understanding and compassion. During their brief relationship, 77 attempts to teach a rage-filled Mai about anger, that just smashing the robots she blames for her mother’s distance can’t change the world, and won’t help her deal with her absent father. Divorce is only becoming a widespread phenomenon in China over the last couple of decades, and generations of only children are struggling to cope. Other important life lessons that Mai comes to learn are tolerance, how to reach out to others, and dealing with loss and consequences.

This story isn’t simply about Mai though. 77 is also a damaged individual. Literally. His memory is corrupted, and at the end of each day, he must make a heartrending decision as to what experiences he wishes to retain, and which he must lose forever in order to maintain his life with Mai.This is a work that is not afraid to have a sad ending, even if it’s a children’s animation, and whilst having a robot should give the storytellers all sorts of Deus ex Machina,  “Next Gen”s insistence on following consequences of actions through, even when made for the common good, is charming and very grown up. It makes the film as much about the new generation of humans as robots.

The film is based on a rage comic by Chinese artist Wang Nima, who used to work for the net comics publisher Baozou, whose logo you can see in the backgrounds of one scene. He also hosted a netizen talk show, the avatar of which makes an appearance in the film. 7723 is a simple line drawing comic that Wang created as a commentary on current affairs, featuring a scrappy robot and stick figure girl, against a flood of memes, modern discomforts, and societal roadblocks. Baozou’s site was shut down earlier this year due to censorship of a parody featuring the Chinese National Hero, Dong Chunrui. Wang issued an apology stating that his intention was to rage against the inclusion of adverts in school textbooks. Baozou’s site is now back up, but apart from a few panels here and there in other articles, 7723 is nowhere to be seen. I’m very glad that his comic is now educating thousands of kids around the world, though one of the lessons is certainly that blind rage doesn’t always work.