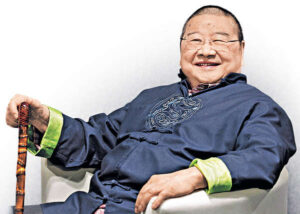 On July the 3rd 2022, renowned writer Ni Kuang, passed away, aged 87. He was one of the most popular modern classic Sinophone writers.

Born Ni Cong, in Shanghai in 1935, Ni Kuang worked in the Department of Security. At the age of 22, he fled to Hong Kong, where he began to make a living by doing whatever work was available, before finding employment at Commercial Daily and eventually devoting all his time to writing. He moved to the U.S. with his family in 1992 and then in 2007, returned to Hong Kong, where he spent the remainder of this life. An exceptionally prolific creator, he wrote some 300 novels and 450 film scripts.

Years ago, when I was writing materials for introducing the Chinese science fiction tradition to the West, I was reading up on all the modern classics I could find. Delving into Ni Kuang’s signature series, the Wisely novels about the encounters of a young adventurer across time and space, I was excited to find myself in 1930s China, a bamboo forest, with fighting swordsmen and glowing alien objects. A lot of modern classics had been heavily Western-influenced, and I was pleasantly surprised at Ni’s effortless marrying of traditional Chinese culture and sci-fi elements, even blending in one of my favourite fantasy genres, wuxia.

The first Wisely novel Diamond Flower was serialised on Mingpao Newspaper in 1962 to great acclaim, and Ni subsequently composed over a hundred stories surrounding the same character. The fourth novel in the series was selected for Asiaweek’s One Hundred Greatest 20th Century Sinophone Novels. From the 1980s onwards, multiple film and TV adaptations have been made of this much-loved series.

In late 1960s Asia, wuxia films were beginning to enjoy a revival at the cinemas. So Ni Kuang turned to screen writing, penning the script for the Chang Cheh’s One Armed Swordsman, now a timeless classic. He wrote some 300 film scripts in his lifetime, which probably includes many all-time favourite kungfu classics. He was involved in the writing of Lo Wei’s The Chinese Connection (1972), creating the character of Chen Zhen, a republican-era hero, and crafting Chen’s unique on-screen image for Bruce Lee, which was then continued into the 21st century by Donnie Yen in Legend of the Fist (2010).

Ni Kuang was one of the very few writers of his generation who became a full-time writer. Perhaps it’s the incentive of making a living that motivated him to be so productive, sometimes writing up to 20,000 words a day, fuelled by an imagination that gallops as quickly as his writing speed, creating across many genres, from SF, to fantasy, crime and wuxia, and being serialised by twelve newspapers. His Black Mulan (a.k.a. Heroic Trio) series of 60 novels, written under the pen name of Weili, blended sci-fi with crime and wuxia. He saw his role not as that of an artist, but an artisan. He even took over the writing of his friends and famous contemporaries, co-writing some of Chang Che’s scripts and while Jin Yong was away, helping to meet the tight serialisation schedules for Demi Gods and Semi Devils.

The wuxia series Ni himself was best known for was The Deadful Melody, a tale of clan feuds, jianghu revenge and romance featuring an anti-hero, two generations of xiake, including some young would-be kungfu masters and some morally ambiguous main characters. In other words, some of the best that the genre has to offer.

Ni Kuang was not only influential for his fiction, but for his views on society, history and literature, both expressed in interviews and in his published non-fiction. One of the contributors to Sinopticon, my collection of Chinese science fiction quoted his views on modern history in the epilogue of her story.

What made Ni Kuang’s fiction so memorable and popular, was his down-to-earth attitude to writing that filtered through to his work. In an interview with chief editor of Mingpao Monthly in 2019, Ni said, “no matter what kind of a novel it is, it’s still a novel in the end, people have got to want to read it. Even Mr Cha (Jin Yong), who enjoys the high status he does today, will admit that when you’re writing a novel, you’re telling a story, and you must tell it well.” I’m very glad he has left so many well told stories for us to remember him by, and to entertain many new generations of readers to come.