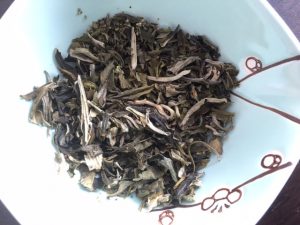 This year in Britain, summer arrived with a fiery flourish, got chased away by the rain and is now hiding, hesitant to emerge again. A great way to enhance the vibe of this lovely season amidst intermittently grey skies, gusts of wind and rain, is to drink white tea.

One to start with is the 雪芽 (xueya) White Snow Bud variety from Fujian’s Fuding, an area renown, in a region renown, for its tea growing in China. Handpicked and harvested in springtime, the Xueya is one of several varieties grown out of the Fuding Dabai (Fuding Large White) cultivar and named after the green buds coated in silvery downy fuzz that gives them the appearance of being covered in snow. These contrast nicely with the darker green open leaves that also make up the White Snow Bud, unlike other white teas that consist entirely of buds.

The Xueya should not be made in boiling water, but hot water at 70 Celsius, and steeped for 3 minutes. Looking at the pale yellow colour of the liquid, you might think it needs a bit more infusing, but white tea really is meant to be very light and refreshing. I find this one delicate but distinct with a floral aroma and a clear note. It tastes slightly astringent but mainly sweet and vegetal on the tongue. The White Snow Bud, being the more full-bodied among white teas, provides a good introduction if you’re to this category. 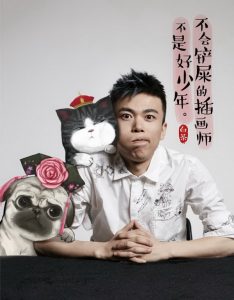 Over the last couple of decades, Chinese white tea has become widely drunk around the world. Today, you’ll find soft drinks, desserts and even cosmetics that all draw from the benefits and fragrance of white tea. Did you know there’s a Chinese illustrator and manhua artist whose pseudonym pays tribute to this tea? (If you’ve been reading my posts, you would). Since 2014, Baicha (Chinese term for white tea) has been captivating Chinese internet with his brainchild Wuhuang (“your majesty”), a large, rotund and rather despotic looking striped moggie cat, who is accompanied by a mournful looking, rather put-upon pug named Bazha.

Wuhuang took ten years in the making before his image went into circulation. Baicha had set himself the task of drawing 200 cats and upon his 25th cutesy feline, he got rather fed up and decided, on the spur of the moment, to flatten the mouth, narrow the eyes. People online loved it and commented that the cat had the vague air of an emperor, thus the name Wuhuang was born. This grumpy feline started life as illustrated art on social media and a phone screen, and now possesses an empire of four printed manhua books, a clan of characters (another dog, an ox, and three humans, including his owner/minion) and a treasury of merchandise, including the distinct Chanshiguan (“poo-shovelling officer”) range, and almost 5 million subjects.

Wuhuang’s success in China lies in several factors. He is drawn in traditional ink wash style, which is why his creator made him black and white, the text in the illustrations and manhua is in calligraphy and he’s even got his own seal. All this is given the accessible treatment though, and more importantly, Wuhuang fills a gap in a nation where the cat had once run the roost among the rural crop fields, but now has an overwhelmingly mollycoddled, twee, tame and timid image forced upon it by modern urban society. Anyone who has ever owned, or lived with a cat, can tell you that this is far from the full picture of these seemingly adorable creatures. Both his Chineseness and catness will equally appeal to global lovers of cats, Chinese art and comics, alike.

Rights, I’m off to enjoy a cup of White Snow Bud, and may be cool myself with this gorgeous silk bamboo fan.

You can find out more about Wuhuang and his Baicha here.
You can purchase the lovely white tea I’ve reviewed here.

This article has been written with thanks for NothingButTea for their wonderful teas, and The Paper for their interview with Baicha. 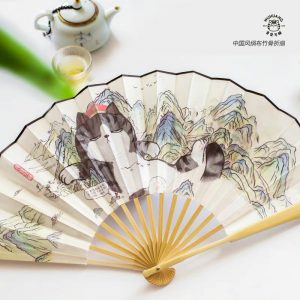