Happy Halloween. To celebrate, I’m going to tell you about the history of horror films in mainland China. It’s true that there haven’t been as many horror classics produced in the People’s Republic, as in Hong Kong, due to closer control of more “sensationalist” content, but we should remember that it was the film talent from Shanghai, who migrated to Hong Kong in the early twentieth century that helped Hong Kong’s legendary cinema industry flourish.

Ma-Xu Weibang is considered the father of Chinese horror. Whilst studying fine art in his youth, Ma-Xu delved into Hollywood movies, examining their sets, props and make-up, perfecting his own skills. In 1926 he directed and starred in “The Devil Incarnate” for Shanghai Langhua Films. His make-up and performance as the titular devil earned him the name of “Lon Chaney of the East”.

It was his “Midnight Song” 1936 (New China Films) that shook the Chinese cinema industry and progressed the horror genre. The story is set in the early years of the Republic of China, where ex-revolutionary Song Dan Ping lives in a small northern town as a singer and actor, keeping his history secret . He falls in love with Li Xiao Xia, the daughter of the landlord. He is attacked by the local thug, who wants Li for himself. Ten years later, a distracted Li stills pines for Song, who she believes to be dead, her only comfort being the mysterious and beautiful voice, which sings to her at midnight. An acting troupe arrives in the town to perform at the ruined old theatre, abandoned for years and reputed to be haunted. Young actor Sun Xiao Peng find himself aided in his art by a ghostly caped figure in a mask.

This noir film is eerie and atmospheric, in which the horror is compounded by sadness of lost love and anidealist meeting his terrible end. Owing so much of its story to Chaney’s Phantom of the Opera, Ma-Xu was meticulous in his filming, every plant, candle and shadow was carefully arranged, ever shot repeated until it was perfected. The scene in which Song unwraps his bandaged face and looks into a mirror, not only shows Ma-Xu’s skill with theatrical make-up, but also his diversity, being able to dramatise the horror of the ghastly as well as the ghostly.

The film’s success owed something to the production company’s promotion. Years before the vaudevillainous exploits of William Castle, coffins were placed outside the cinema auditorium, under a poster of the ghoul’s fiendish eyes, audience were warned that the film was not for those with a heart condition, or a nervous disposition. “Song at Midnight” left such an indelible mark on Chinese cinema that the story has been revisited many times, most famously by Ronny Yu in his 1995 “The Phantom Lover” starring Leslie Cheung.

Ma-Xu left Shanghai for Hong Kong in the 1940s, when the dominant political movement led to a hiatus of independent art production until the 1980s, when the arts were permitted the freedom to resume and flourish.

A more recent horror masterpiece, worth hunting down, is the 1989 film “The Haunted Mansion” by Liang Ming and Mu Deyuan, two teachers from the Bejing Film Academy, who were given the opportunity to make a film by the Shenzhen Film Company. 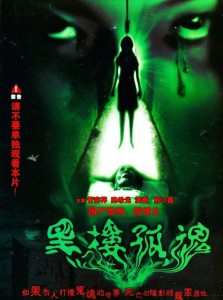 The hero of the film Huo Feng is a sound mixer who visits an old apartment block with actress Yu Hong. During the recording, Yu, a self-confessed telepath finds herself distracted by visions of their director and his dark secrets, whilst Huo detects unusual readings on his sound equipment. The two investigate further and discover that a gruesome murder of a fourteen year old girl had occurred in the now sealed off basement of the building. As Huo ventures into the basement, he unleashes a furious spirit determined to wreak her revenge.

Filmed on a shoestring budget, the effects and approach are very low key, with economical uses of the spectral or horrific, but strong cinematic highlights of brief moments of frenzied horror, such as baths filling with blood and violent poltergeist activity, produce a more startling effect than a CGI laden gore fest.

The film offers multiple narrative perspectives, with visions and shifting timelines. A mundane scene of tidying up from the film’s beginning, is revisited and contextualised as the decontamination of a murder scene by a killer. As is the way with Chinese cinema, genres are blended, and moments of Sci-Fi and comedy find their way into the piece, from the green glowing rays representing the soul leaving the body, to Huo, sound equipment slung on his back, recording tube in his hands, silhouetted in the doorway of the basement, to the tune of Also Sprach Zarathustra, referencing not only Kubrick’s 2001 Space Odyssey, but Reitman’s Ghostbusters.

With the success of the supernatural and horror genres in China, both those produced locally, and internationally, film companies began to turn to China’s historic repetoir of ghosts and demons, particularly in the last few years, with cinematic adaptations of Pu Song Ling’s 19th century ghost stories.

Next week, rounding off our month of monsters, we will look at a few of these!