Over the last month, I’ve delved a little into Chinese ideas of ghosts, and horror. The ultimate source however, is the work of Shandong scholar, Pu Song Ling, who gathered stories from common folk and rewrote them into 491 short stories collected as 聊斋志异 “Liao Zhai Zhi Yi”, or “Strange Tales from the Hearth” (or more commonly in the West, “Strange Tales from a Chinese Studio”).

Pu Song Ling recognized the importance of folklore and the oral tradition, and collected these stories for literary heritage. The turbulent nature of China’s history means that at one time or another, these traditional tales would be lost, had not this record been made. Even recently, as I have already commented on, the Chinese horror genre had been ignored under the harsh censorship of the second half of the twentieth century. When it was returned to, Liao Zhai Zhi Yi was there waiting for it.

Along with classic TV series based on this book, the mid 80s  saw the formation of Hong Kong’s New Wave Cinema movement. They pioneered the exploration of not only new narrative approaches, but also local identity and social issues in what was then a British colony. Elements from mythology, traditional rituals and beliefs were important to directors such as Ann Hui (“The Secret”, “The Spooky Bunch”) and Tsui Hark (“Green Snake”, “Warriors of Zu Mountain”).

The 1987  film “Chinese Ghost Story”, produced by Tsui Hark, is almost synonymous in the West with Chinesehorror, and thanks to the various late night TV showings, and a VHS release, one that has been widely seen . Indeed, the chosen translation for the title suggests that English speaking audiences were then very new to Chinese ghosts stories. As an adaptation of “Nie Xiao Qian” from “Liao Zhai”, the film elaborates on the horror aspect of the story by portraying the incredible power of Lao Lao, the thousand year old tree demon who controls our female ghost heroine, Xiao Qian, against her will. Tsui Hark’s signature style uses cutting edge lighting, miniatures and other special effects to give a martial arts fantasy film a supernatural dimension. 10 years later, Tsui wrote for the award winning animated version of this story, with visual influences uniting the aesthetics of Taoist art and popular anime of the time, including Pokemon.

As the horror genre became increasingly popular with domestic Chinese audiences, Chinese directors returned to their classics for inspiration, and in 2008, with all eyes on China for the Olympics. Golden Sun Films combined talent from Hong Kong, Taiwan and the mainland for a fantastic fantasy film, “Painted Skin” (Gordon Chan, Andy Wing-Keung Chin, Danny Ko)

This production is a feast for eyes in many ways, from the amazing period sets, the CGI enhanced fight scenes, and the sheer beauty of the fox demon, both in her animated demonic form, and her human skinned version, played by Zhou Xun. It also drew on the gruesome horror of the original tale, the skin changing and the heart eating, which, perhaps made this story the most popular in the collection, and certainly one of the most theatrical.

Whilst the film gave Xiao Wei, the fox demon, a more rounded character than the original story, introducing ideas of redemption after a very demonic beginning, it also added to the confusion between the fox spirits which are mostly kind in “Liao Zhai”, and the fox demon in “Painted Skin”, referred to by the same word in Chinese 狐狸精 (“Hu Li Jing”), a term also used contemporarily to describe young mistresses of married men, (and a subject the film certainly explores).

Whilst this has not been the story’s first telling in film (there was another adaptation in 1966) “Painted Skin” 2008 is definitely the most internationally known version of a “Liao Zhai” story. Its success brought a new wave of internationally released “Liao Zhai” inspired Chinese horror movies.  In 2011 Gordon Chan brought out an adaptation of the story, 画璧 “Hua Bi”, or “Mural“, focusing on the world in the mural, described beautifully in one breath-taking paragraph by Pu Song Ling. Pitched as a quasi-sequel to “Painted Skin”, it’s a showcase of pan-Asian costumes, China’s rare natural landscapes and modern classical conceptual designs for fantasy world building.

The story of “Nie Xiao Qian” was brought to the screen again by Wilson Yip in the same year, as “A Chinese Fairy Tale”, as more of a monster hunting Wuxia movie than Tsui’s version, but taking definite visual queues from his cinematography.

Very close on their heels came an actual sequel to “Painted Skin”, which brought the audience further in the realms of fantasy. A little heavier handed with the Western influenced CG, it was definitely aimed at the MMORPG generation, with Mongolian born director Wu’Er Shan providing a bolder, more rugged aesthetic to the sets and costumes than the delicate and refined Han Chinese elegance of the original. 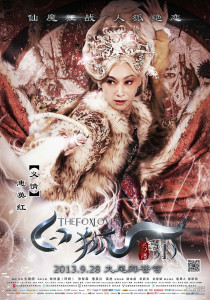 Last year saw Niu Chaoyang’s “the Fox Lover” 2013, adapted from “Xiao Cui”. Originally a story of a fox spiritrepaying a debt of kindness, this film takes massive liberties, creating an adventure into a magic underworld, the conflict between good and evil and a fox spirit’s discovery of love.

Watching these films again for this piece, a cautionary note has sounded with me. Whilst it would be great to see more “Liao Zhai” inspired films, I hope film makers do not grow too complacent with their plot creation and conceptual designs, decorating a fantasy epic with a cute fox demon, and believing they are honouring their cultural history. The stories collected by Pu Song Ling told of fears and longings which help define a nation, and a culture’s identity. Something worth remembering, especially at a time where China is becoming increasingly westernized, and young Chinese adults are more likely to visit a Halloween party than to observe Ghost Month.

Speaking of Halloween, we found a white pumpkin in our local supermarket this year, and considering I seem to be writing a lot about fox spirits at the moment, we thought this would be appropriate…